8 Great Things to Do in Beijing (Plus A 3-Day Itinerary!)

Beijing, China's enormous capital city, is full of historical and cultural monuments not to be missed on your visit. With its sprawling size, you could spend days wandering and exploring. Since it's such a popular destination though, it's helpful to have a checklist and do a little pre-planning to make sure you get to do everything you want to on your trip. In this article, I'll cover 8 things I think you should not miss when visiting Beijing, plus a sample itinerary showing you how to do it!

8 Great Things to Do in Beijing

Trying to plan your trip to Beijing? Not sure what there is to see? Here's a quick list of things I think visitors should be sure to do when visiting this incredible city.

The Forbidden City, or the Palace Museum, is a UNESCO World Heritage site that should be at the top of everyone's list for Beijing. For over five centuries (1416-1911), this complex served as the seat of imperial power for China and where 24 Chinese emperors ruled during the Ming and Qing dynasties. 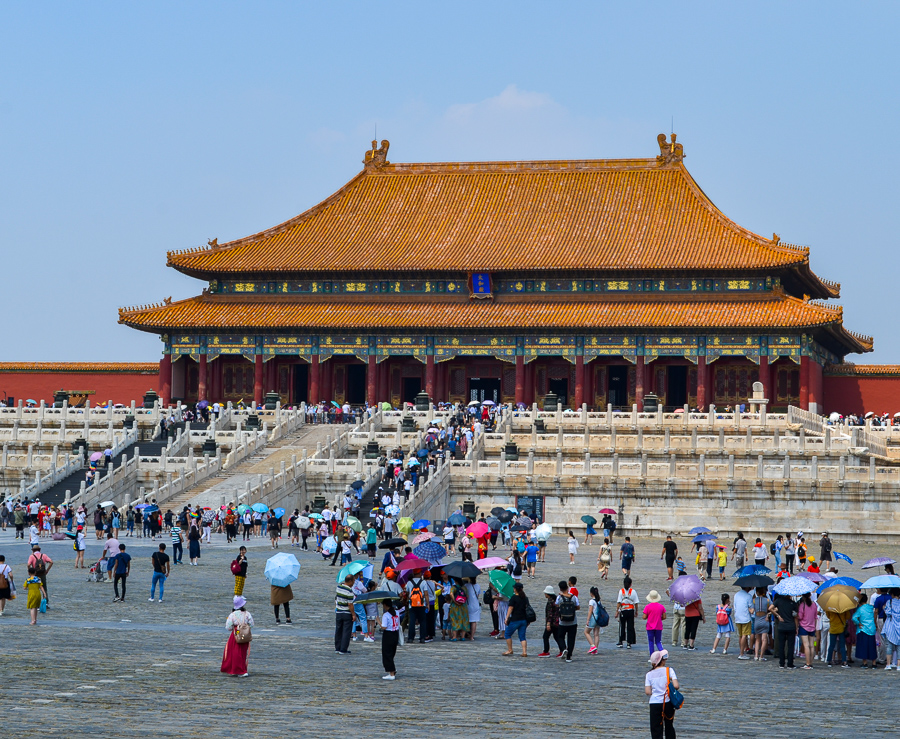 Located at the heart of Beijing, this sprawling palace complex is made up of various grand receiving halls, political chambers, royal living quarters, and gardens. 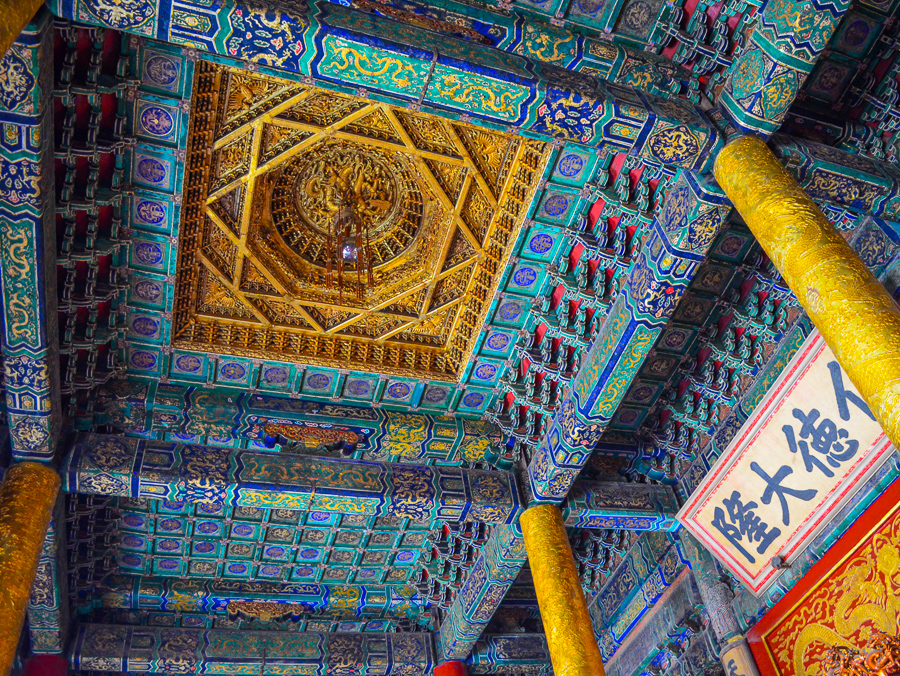 You can easily wander through the maze of alleyways connecting the buildings for hours. And since you can only stay for half the day, it's hard to see everything! 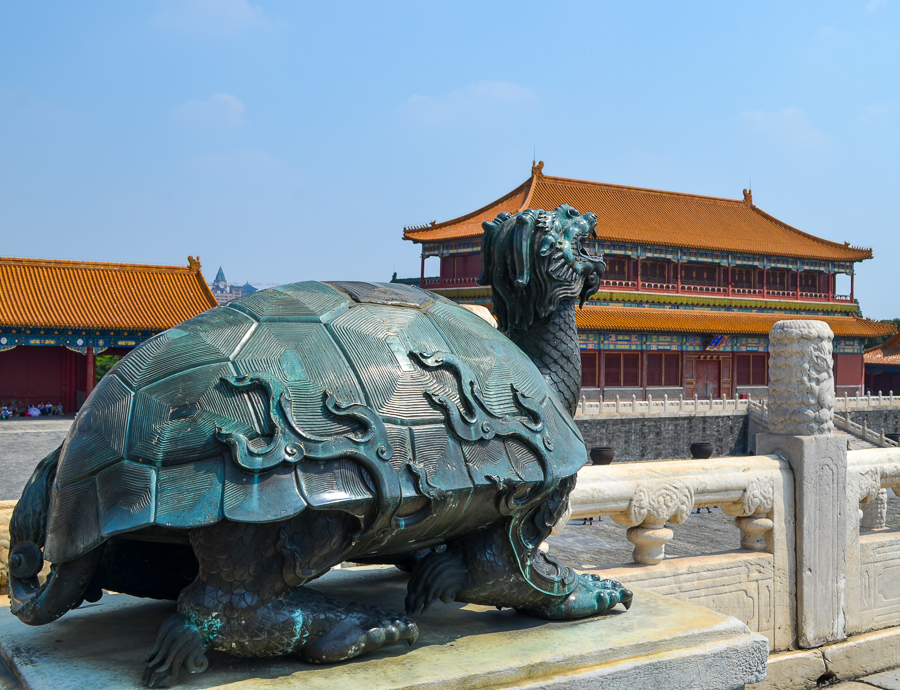 Pro Tip:  Because the Forbidden City is such a popular tourist attraction (over 14 million visitors annually!), the Palace Museum limits the number of visitors per day to 80,000 people. As a result, I highly recommend purchasing your tickets in advance online as tickets regularly sell out. They go on sale 10 days in advance, so mark your calendar!

Across the street from the visitor entrance to the Forbidden City is Tiananmen Square. This city square contains a large obelisk Monument to the People's Heroes, the Great Hall of the People (legislative building), the National Museum of China, and the Mausoleum of Mao Zedong. 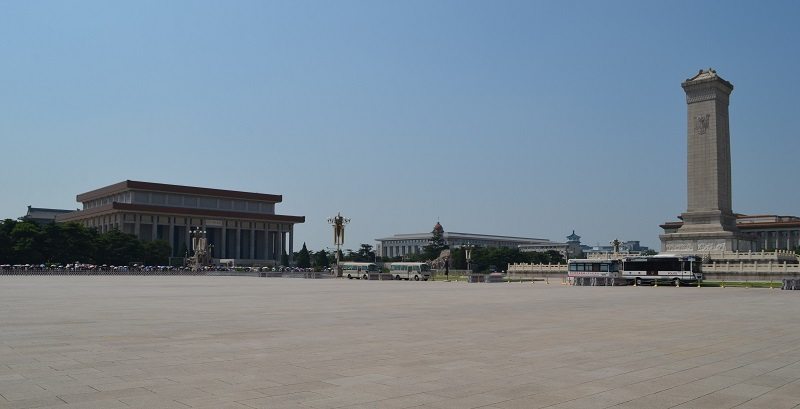 Very open square so you might want to bring an umbrella for sun protection!

Although Tiananmen Square has been the site of many historical events and military parades, it's probably best known (outside of China) for the Tiananmen Square Massacre on June 4, 1989. On this date, military troops fired on and killed (at minimum) hundreds of civilians to end ongoing protests.

Since Beijing, alternatively romanized as 'Peking', is famous for Peking duck, you shouldn't leave without trying it. As someone who doesn't like to eat duck generally, even I have to admit, it was delicious. The skin is crisp and packed full of flavor. The meat is tender and the juices from the fat keep it moist.

You can find Peking duck in restaurants all over Beijing. We went to a place in the Dongzhimen neighborhood that we liked called Jingzun Peking Duck Restaurant. Plus, they had an English menu! 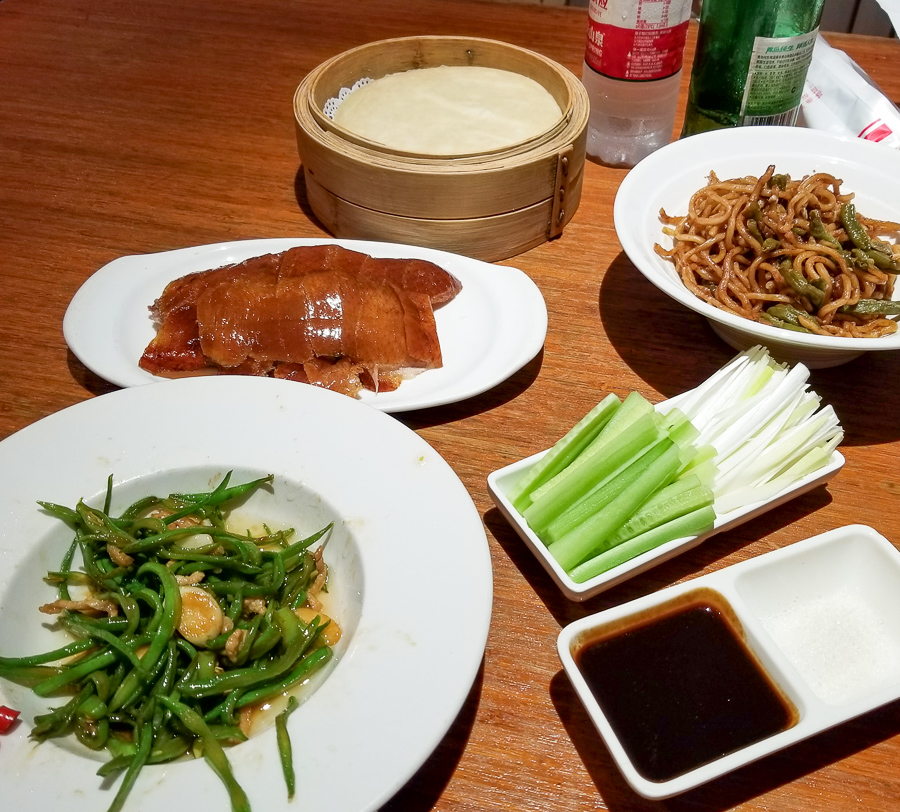 Located in the northwestern outskirts of Beijing, you can find one of the largest and most well-preserved royal parks in China.  Once a summer retreat for emperors, the Summer Palace is now a great place to escape the city for the day! Plus, it's easily accessible (~45-minutes) from central Beijing by metro (metro stop: Beigongmen). 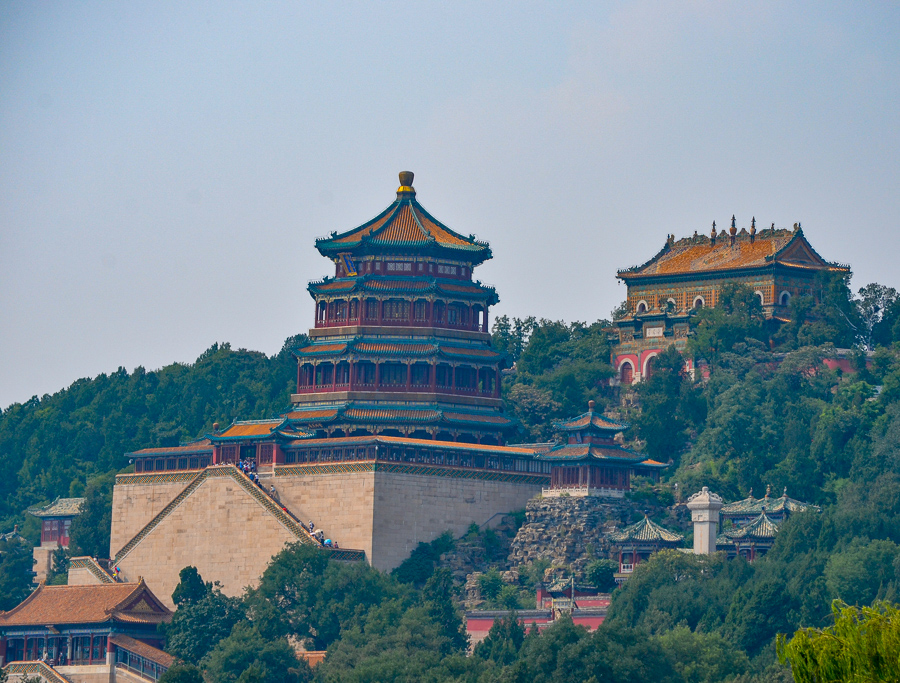 On the hill: Tower of Buddhist Incense

With its vast gardens, walking paths, large lake, and forested hills dotted with temples to explore, you can easily spend the majority of a day here. Some of my favorite parts of the Summer Palace grounds include:

1) Suzhou Street - a replica of the houses, bridges, and canals in Suzhou, a city outside of Shanghai, which was created for the emperors. It reminded me a bit of Disneyland, but without the rides. 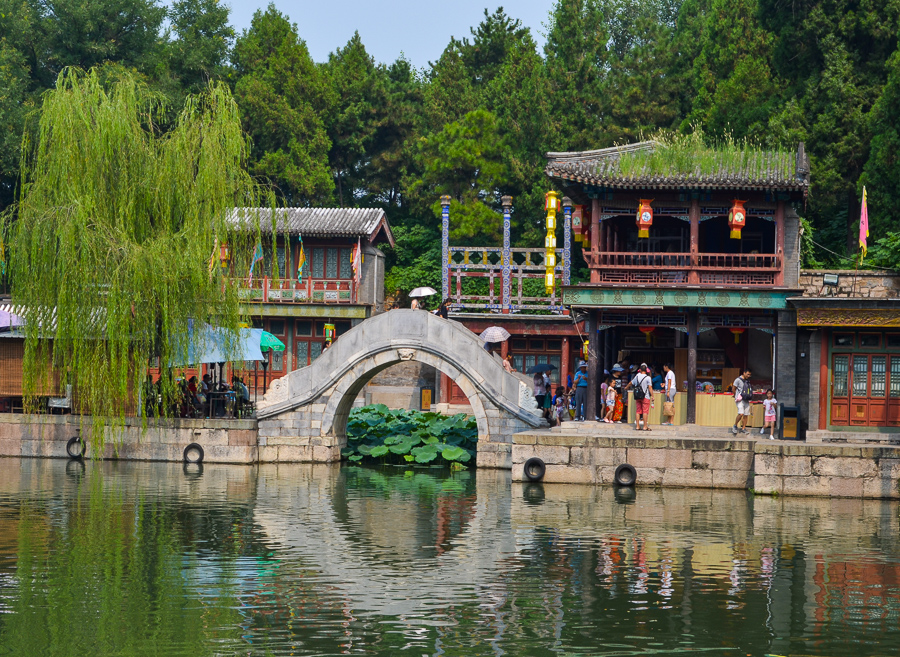 2) Kunming Lake - a large lake in the center of the park. You can take a boat ride around the lake or use the boats to return to Suzhou Street to exit the park. It spares you a lot of walking when you're exhausted from wandering the park all day!

3) Tower of Buddhist Incense - although a bit of a climb to the top, as the tallest point in the park, you get incredible views of the rest of the park. 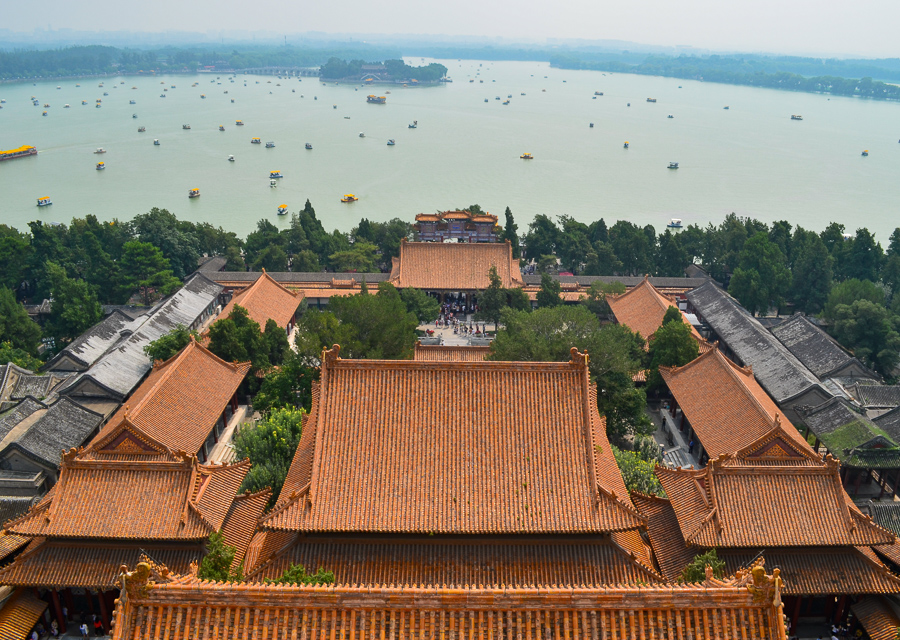 Views of Kunming Lake from the Tower of Buddhist Incense.... it was a bit hazy that day!

Hutongs are narrow alleys, lanes, or streets between the single-story traditional houses (siheyuan). These alleyways connect all the houses and give neighborhoods a feeling of community. 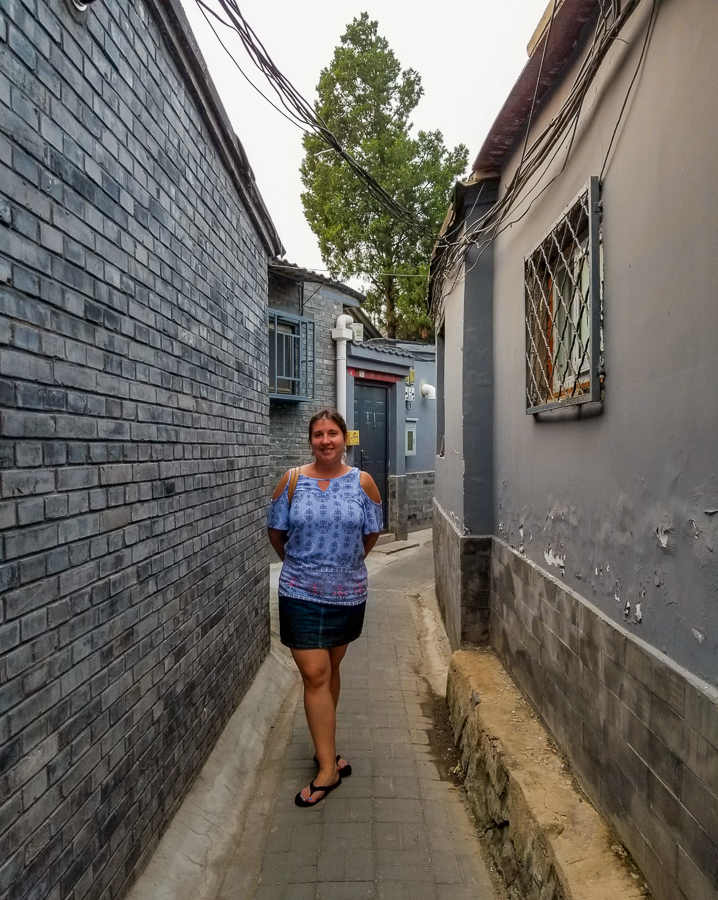 Some passageways are quite narrow!

As you walk through the hutongs, on some streets you'll discover a variety of shops, small restaurants and bars. 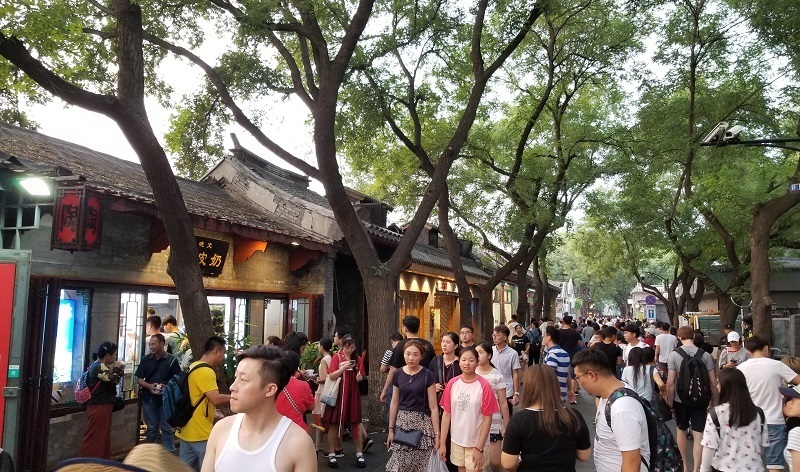 Crowded main street of a hutong.

Most of the hutongs are residential though and walking through them gives you a picture of how most of Beijing looked years ago. 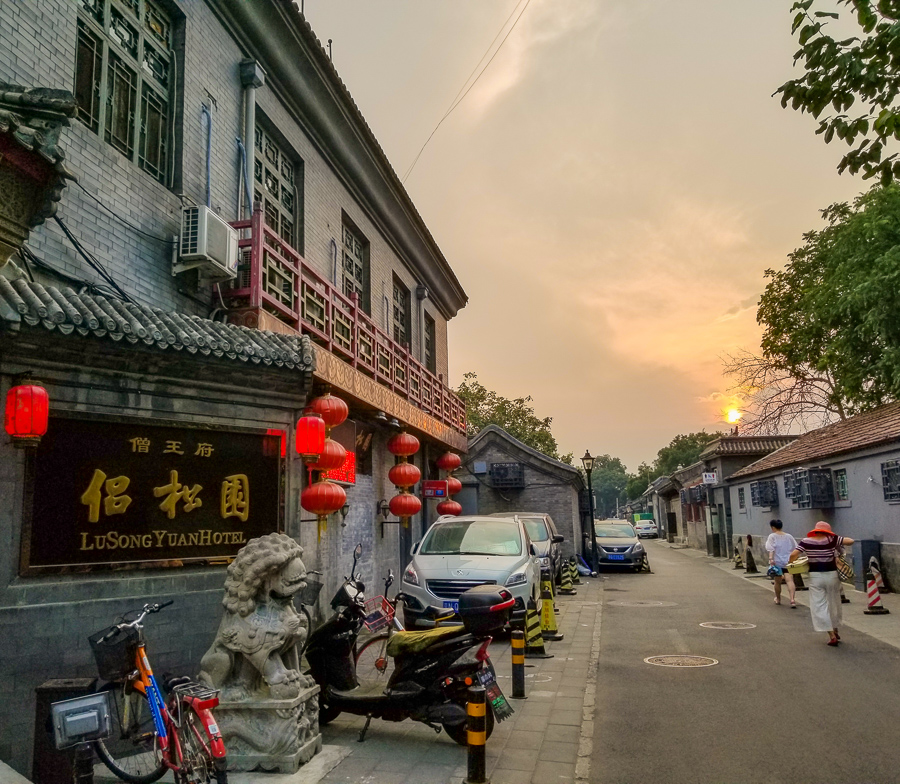 Beijing has a decent craft beer scene that is growing stronger each year. Check out some of the local breweries around the city for beers you'll only find in Beijing! A couple of my favorites were:

1) Jing-A Brewing - In addition to some amazing beers, they serve huge portions of tasty BBQ and sides like mac 'n cheese. Great Leap Brewing menu - check out all the options!

Pro Tip:  Don't trust Google maps for brewery locations - double check on the brewery website! Some of the breweries we tried to visit had either moved or closed the location showing up on Google maps.

7) Visit the Temple of Heaven

Originally constructed in 1420 during the Ming Dynasty, the Temple of Heaven was a sacrificial temple used by emperors in the Ming and Qing dynasties. 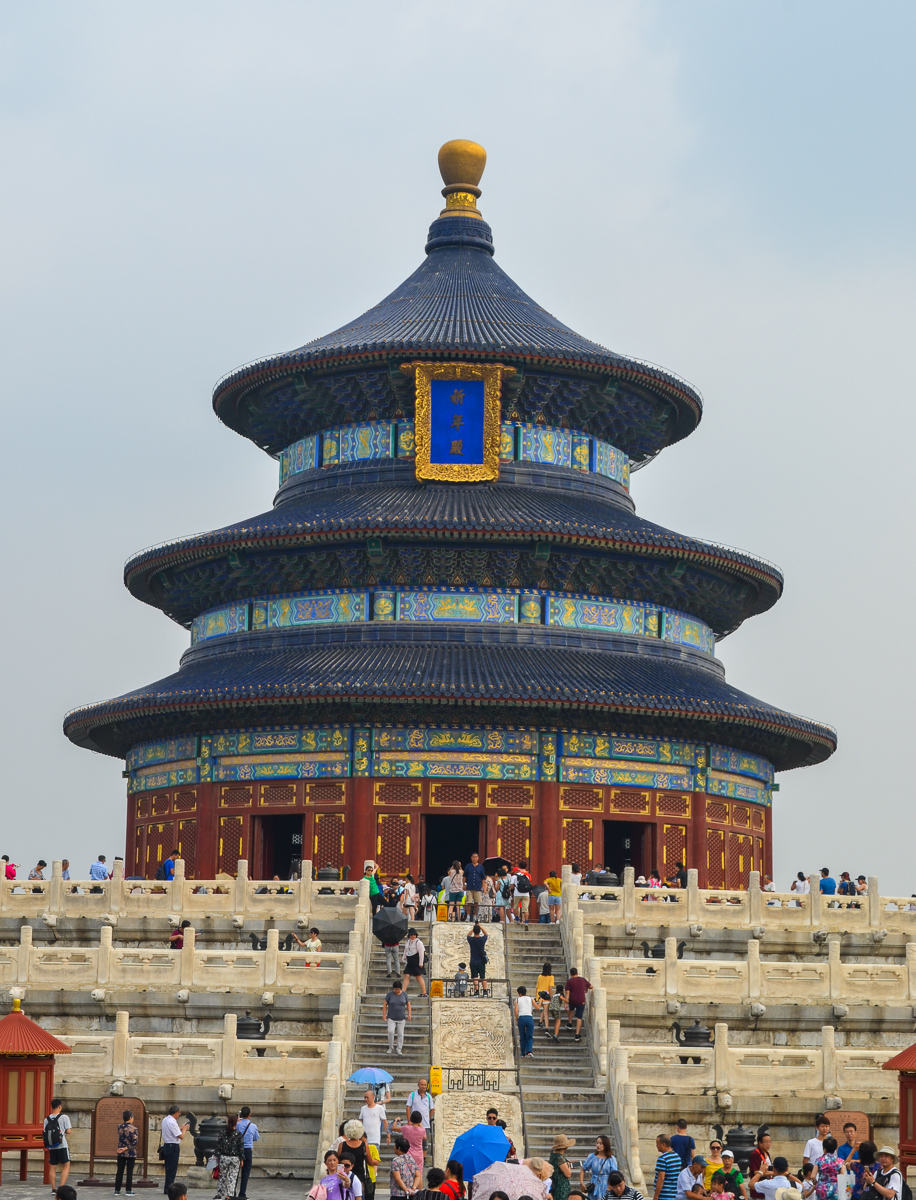 When you enter the park, walk through the Long Corridor to get to the main attraction - the Hall of Prayer for Good Harvests. Unfortunately the original structure was destroyed by lightning in 1889. The one you see today was rebuilt soon after in the Ming Dynasty style. 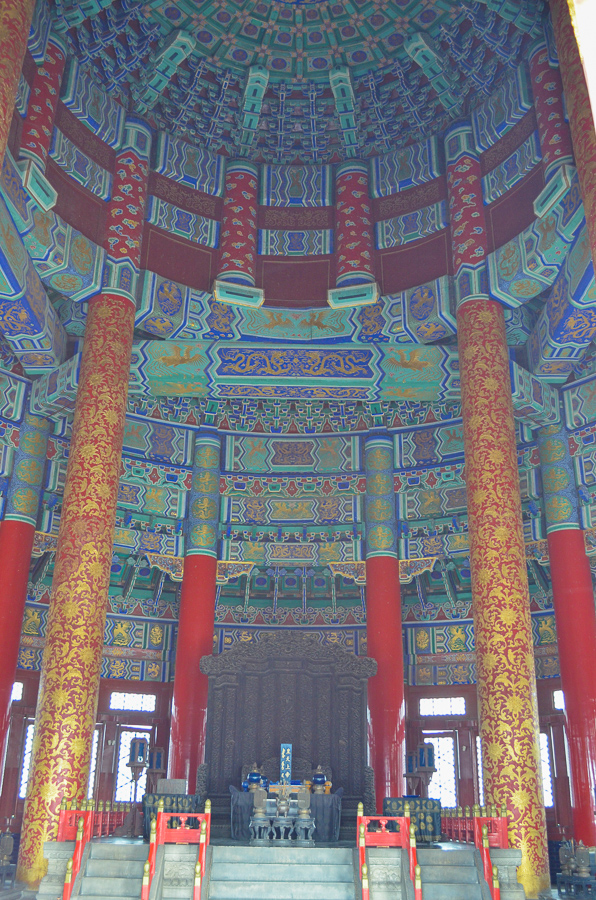 Once you've admired this hall, wander through the rest of the park exploring its many gardens.

8) Hike the Great Wall of China

Though not technically in Beijing, the Great Wall of China is an easy day trip which should not missed! It will be the highlight of any trip to China!

I recommend visiting one of the sections of the Wall further from Beijing to avoid large crowds and over-commercialization. We booked a private tour (private car + guide + lunch at local restaurant) and hiked from Simatai West to Jinshangling (~2.5 hours from Beijing). 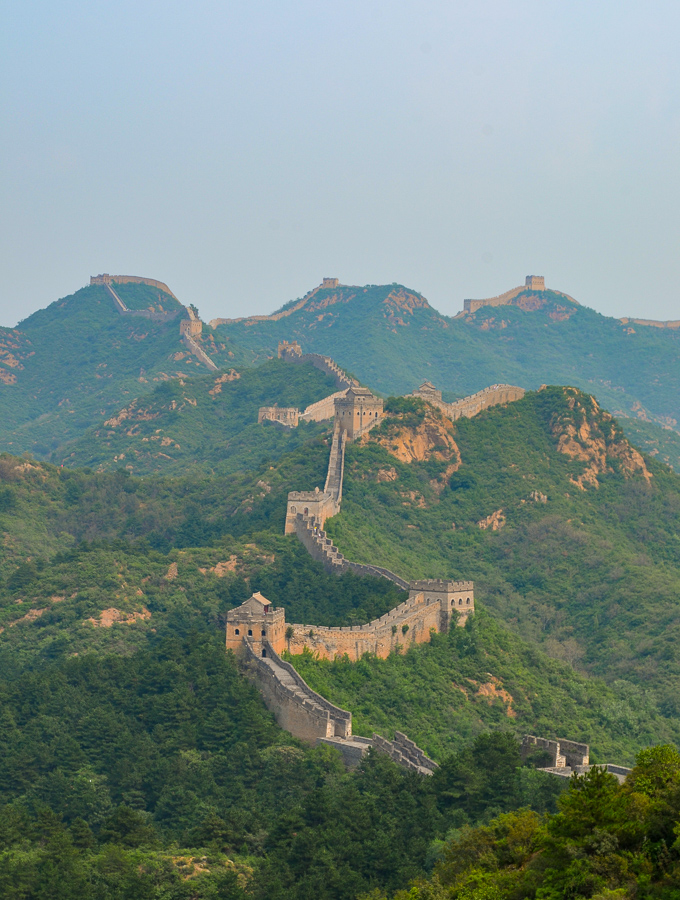 Parts of the wall were rugged, some more restored, but LOTS of stairs throughout the hike! The scenery was incredible and at times we had the Wall completely to ourselves! 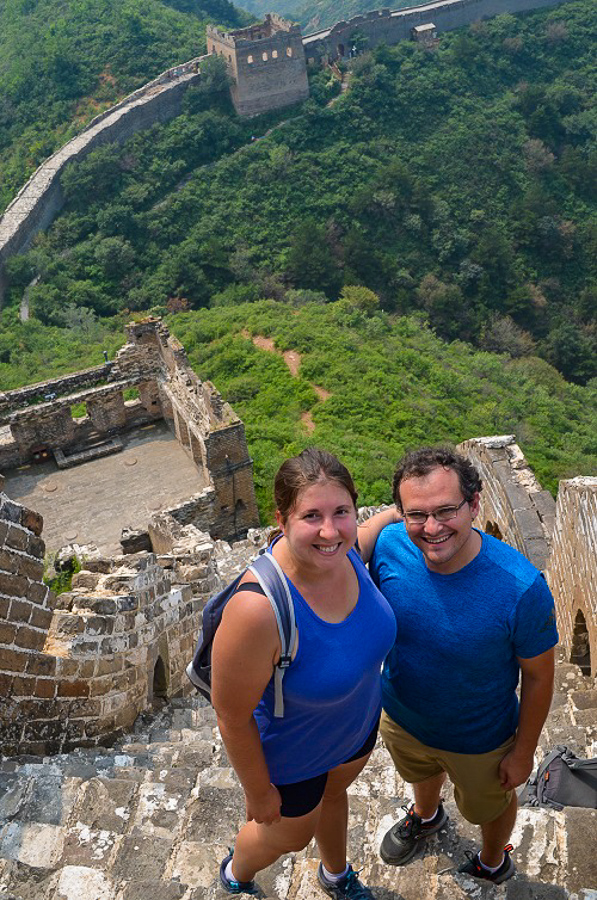 Sweaty, but excited to be on the Great Wall!

Now that you have a list of things to do in Beijing, how can you fit it all in? Here's a sample 3-day itinerary* to get you started!

*For the purpose of this itinerary, I'll assume that you have 3 full days in Beijing to explore.

Begin the day by heading to Tiananmen Square (Metro: Tian'anmen East). Walk around the square, observing the monuments, crazy number of security cameras, and the LONG line to get into the Mausoleum of Mao Zedong. If you have time, head south behind the mausoleum to check out Zhengyang Gate, built in the early 1400s as part of Beijing's city wall.

If you're visiting during summer (when it's hot and sticky), you'll probably head back to your hotel at this point to shower. For dinner, head to Jingzun Peking Duck Restaurant (closest metro: Dongsishitiao) for a Beijing specialty - Peking duck!

Get started early at the Temple of Heaven Park (metro: Tiantan East Gate). Visit the Hall of Prayer for Good Harvests and wander though other parts of the park as you like, but don't tire yourself out.

Then, head to the Summer Palace (metro: Beigongmen) for the rest of the day. Explore its sprawling gardens, ride a boat on Kunming Lake, and climb up the Tower of Buddhist Incense for lovely views.

Head back to refresh at your hotel, if you like, then metro to the Shichahai stop. Walk north to check out the Drum Tower - a reconstruction of a 13th century watchtower with replicas of Ming dynasty drums. Next, wander into the hutongs and pick a local place to eat dinner. Afterwards, check out the craft beer scene at the original Great Leap Brewing location in the hutong. Grab a beer and enjoy the courtyard.

Start out bright and early from Beijing to avoid hitting traffic as you leave the city.  Depending on which section of the Great Wall you decide to hike, you'll drive for a couple hours or longer to the start of your hike.

Spend the day hiking the wall, taking lots of photos, and remember to hydrate! After the hike, eat lunch at a local restaurant (hopefully that will be included in your tour!) then drive back to Beijing. This is a great opportunity for a nap!

After you've showered and re-hydrated at the hotel, head out to the Jing-A Brewery for dinner. After a day of hiking, you've earned all the beer and BBQ calories headed your way! 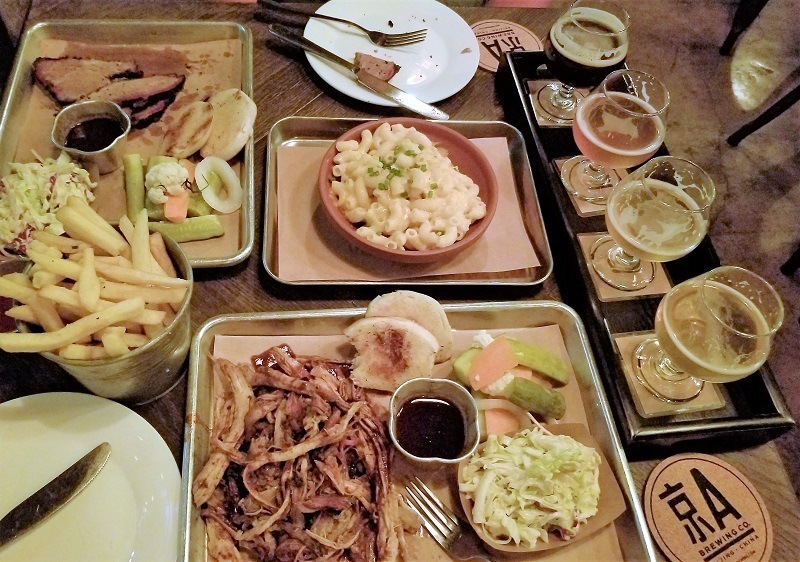 Why not leave you with a mouthwatering photo of BBQ and beer from Jing-A Brewing? 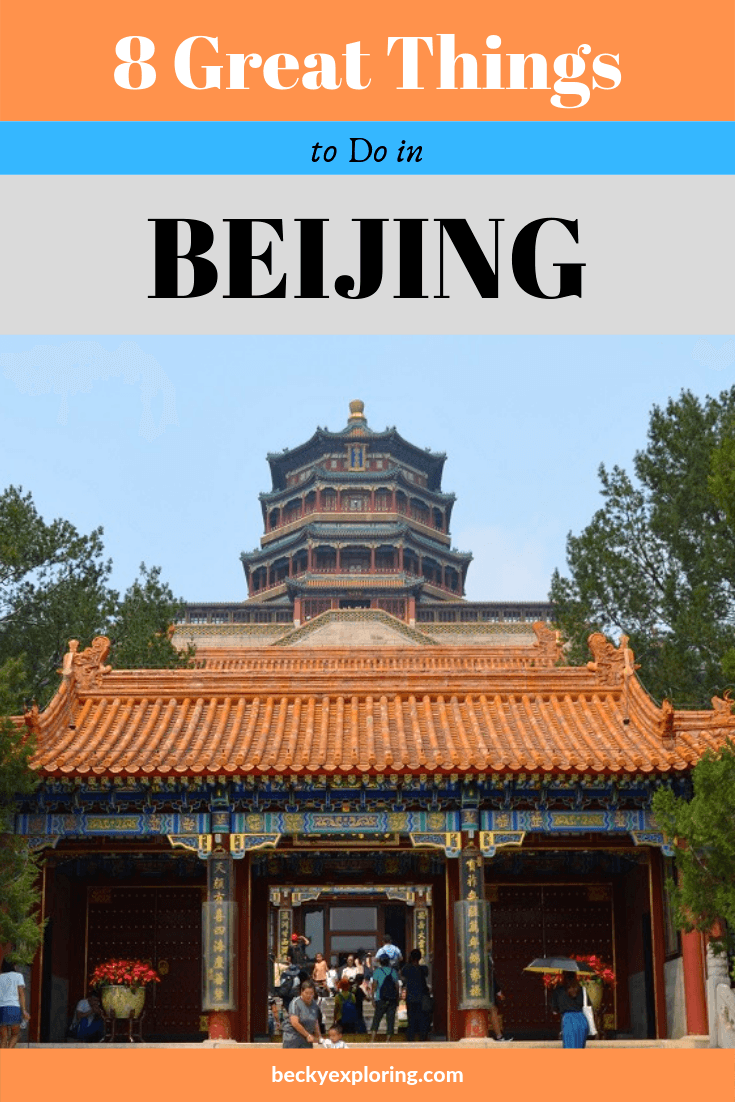 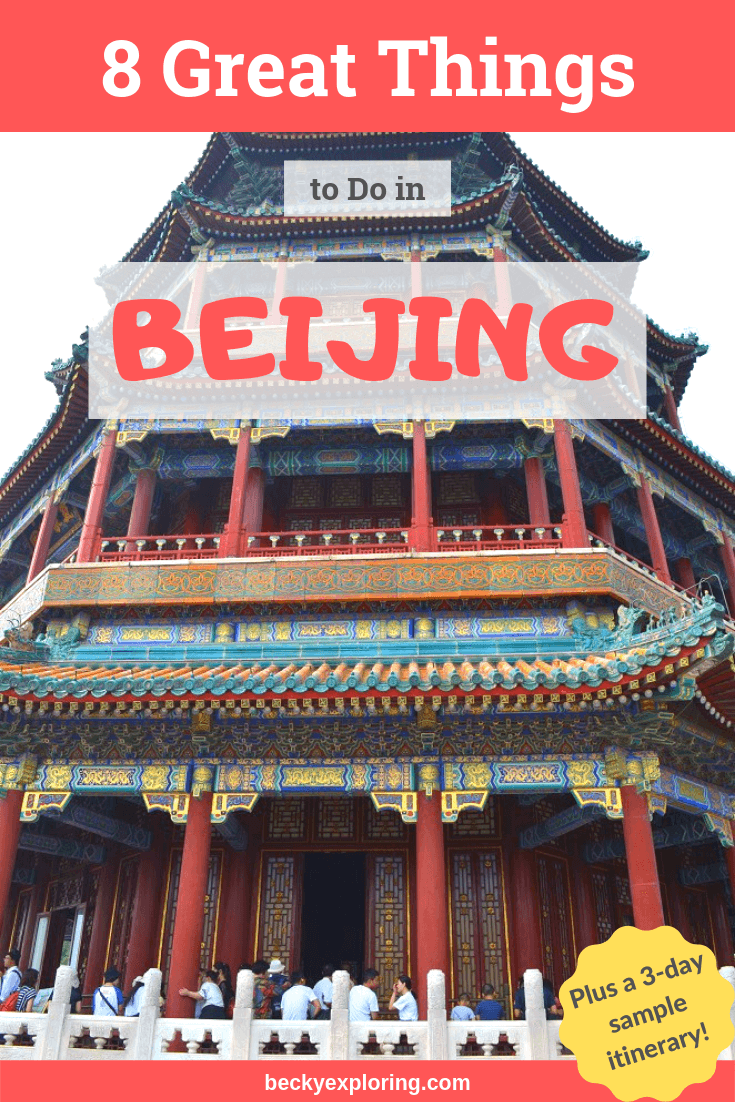 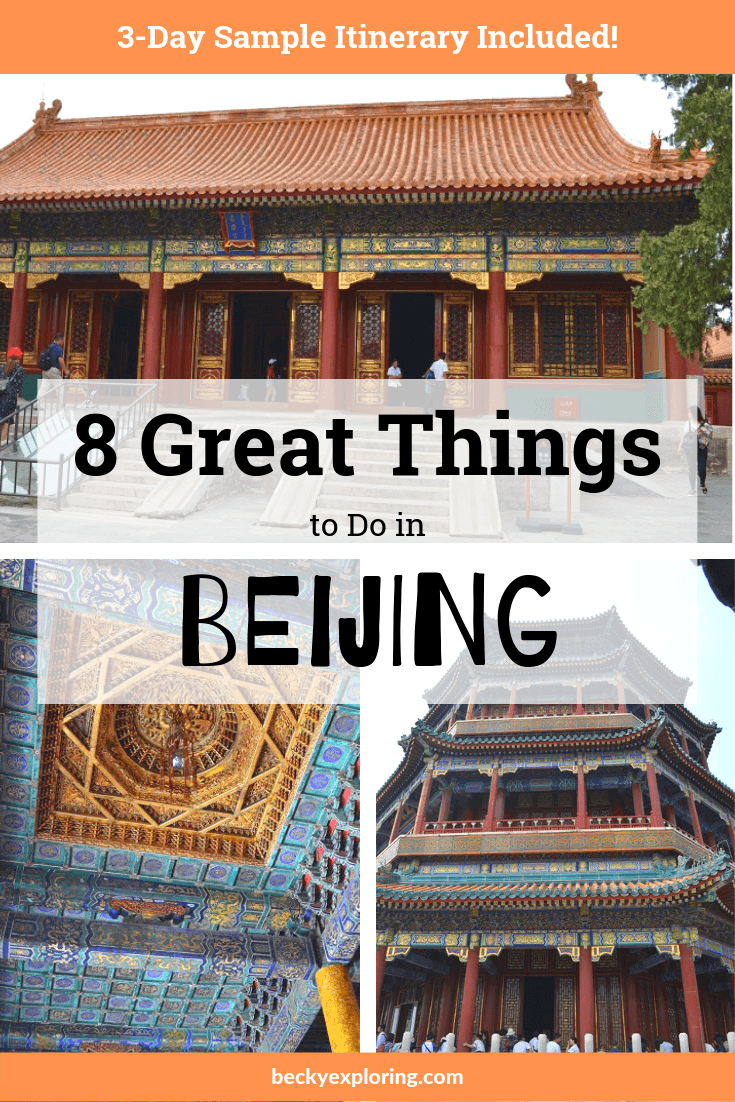 Read More
How to Spend a Fun, Jet-lagged Weekend in Milan