How to Take a Day Trip to Lamma Island

One of the best activities on a beautiful weekend in Hong Kong is to get out of the bustling concrete jungle and take a day trip to the beautiful, laid-back Lamma Island. Only about a 25-minute ferry ride from Central, Hong Kong and you will be transported to a very different world with plenty of hiking paths and beaches to explore. Lamma Island is the third largest island in Hong Kong at 13 sq km (5 sq. mi.) with a population of approximately 8,000 people – and no cars!

Getting to Lamma Island

Head to Central Ferry Pier 4  on Hong Kong Island and choose the ferry to either Yung Shue Wan or Sok Kwu Wan.

Check out Lamma Island ferry timetable and fare information on the HKKF website.

New to Hong Kong? Check out this Guide to Using Public Transportation in Hong Kong.

Yung Shue Wan is the largest village on Lamma Island and has a growing international population. There are plenty of western cafes and restaurants in addition to local seafood restaurants in the village.

A big draw on this side of the island is Hung Shing Ye Beach. It has decent public changing facilities, a barbeque area, and a couple restaurant. Plus, it's only about a 20-minute walk from Yung Shue Wan.

Sok Kwu Wan is a smaller fishing village. In general, the villages and beaches on the southern part of the island more deserted. They also do not have as many public facilities as northern part.

On our most recent excursion, Jeremy and I decided to head to Sok Kwu Wan first. Then we would hike around the southern part of island and finish by hiking north to Yung Shue Wan. We planned to catch the ferry back to Central in the evening from Yung Shue Wan.

Since we are terrible at getting ourselves going on the weekend, we started our journey just after lunch. If you want to take full advantage of the experience, I recommend catching an earlier ferry so you can eat lunch in Sok Kwu Wan. 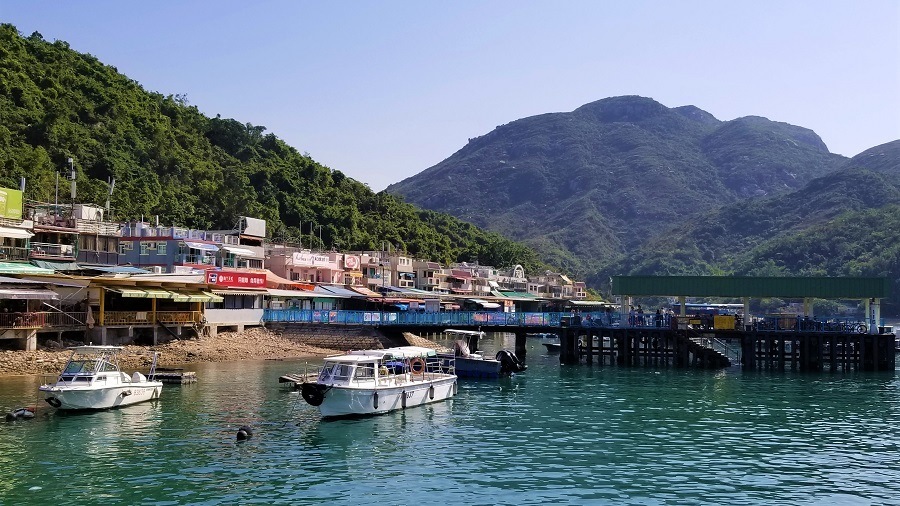 Since Lamma Island is full of fishing villages, both Sok Kwu Wan and Yung Shue Wan have an array of seafood restaurants. In many of them, you can choose your lunch directly from the tanks for a fresh seafood experience.

If seeing your lunch alive before you eat it isn’t your thing, you can order straight from a menu. This is my preference! If you have a large group, be sure to order a bunch of different dishes so you can try the variety of seafood.

Tip: If you plan to hike after lunch, be sure to buy some water (and maybe some snacks) to take with you.  Though there are some places selling water along the way, things get pretty sparse along the path.

Since we got a late start, Jeremy and I began our hike immediately upon arriving in Sok Kwu Wan. We headed east on the Lamma Island Family Walk which offers great views of Aberdeen and Ocean Park across the sea.

The path is fairly flat with some slight ups and downs and is mostly paved. 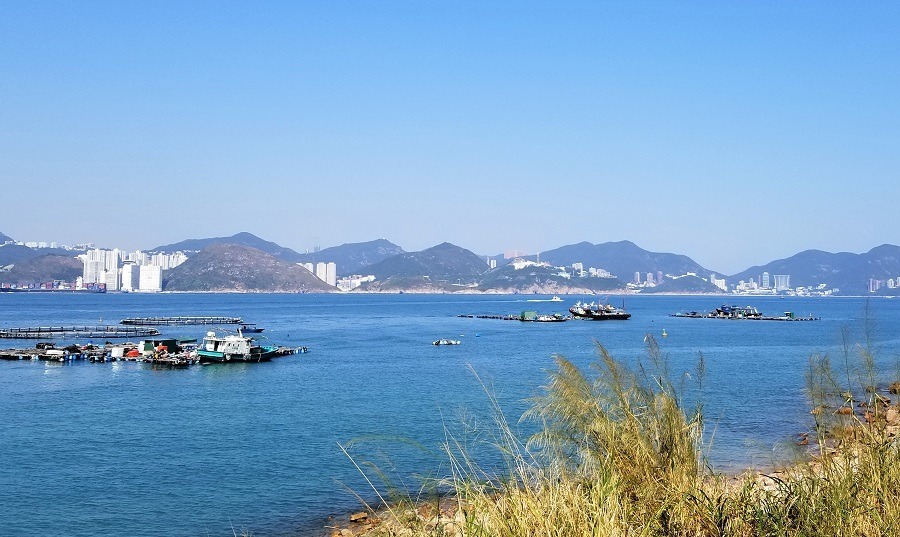 The first village you'll come to - Mo Tat Wan - is a couple kilometers from Sok Kwu Wan. Climb down the stairs to get into the village, then come back up the same way to continue the hike.

This cute little village is next to a beach and has a Mediterranean restaurant with beach-side dining. I haven't eaten at the restaurant but it seemed popular that day.

Shortly after passing Mo Tat Wan, you'll come to a fork in the trail. You can either climb up to Ling Kok Shan, or continue on the Lamma Island Family Walk.

On this day, we chose to continue on the flatter Family Walk instead of climbing up the stairs.

After Mo Tat Wan, we headed further south where the island is even less inhabited. At one point, our phones told us we'd left Hong Kong and tried to put us on roaming!

As we walked, we came across abandoned villages established centuries ago. And the lush greenery around us made me feel like I was hiking through a faraway jungle. It's crazy that we were still in Hong Kong! 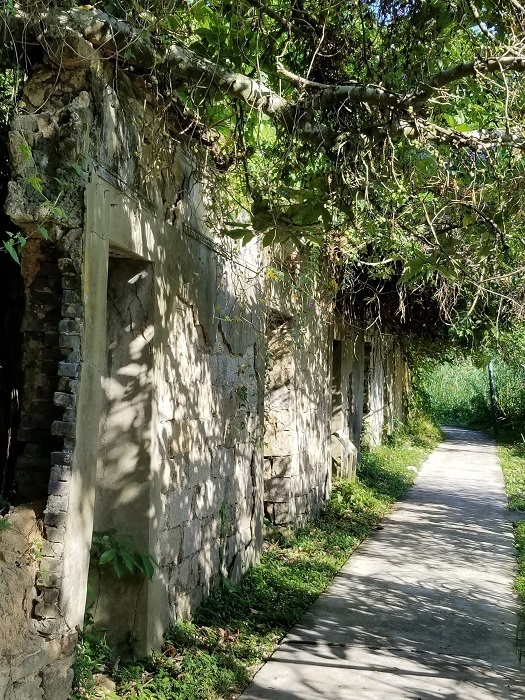 Throughout the hike, we passed beautiful beaches that were practically empty!

If a seafood restaurant doesn't suit your fancy, consider bringing a picnic lunch to eat on the beach. Wonderful views and you'll have the beach practically to yourself! 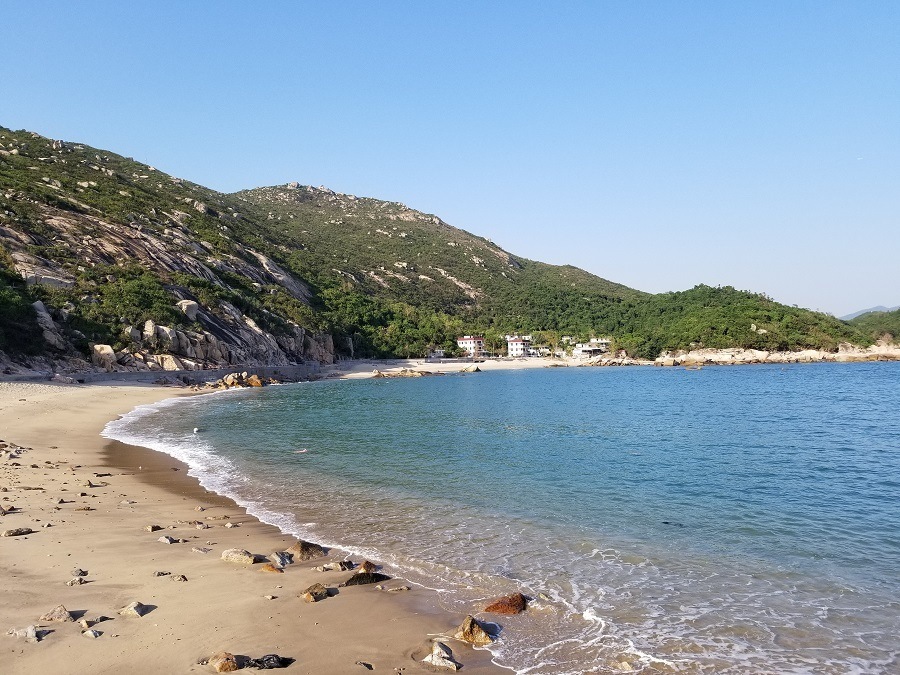 After walking along the coast for several kilometers, the Family Trail turns inland and gains elevation.

Despite choosing not to hike up to Ling Kok Shan, we still had to climb ~100 meters (~330 ft) over the hills to return to Sok Kwu Wan. 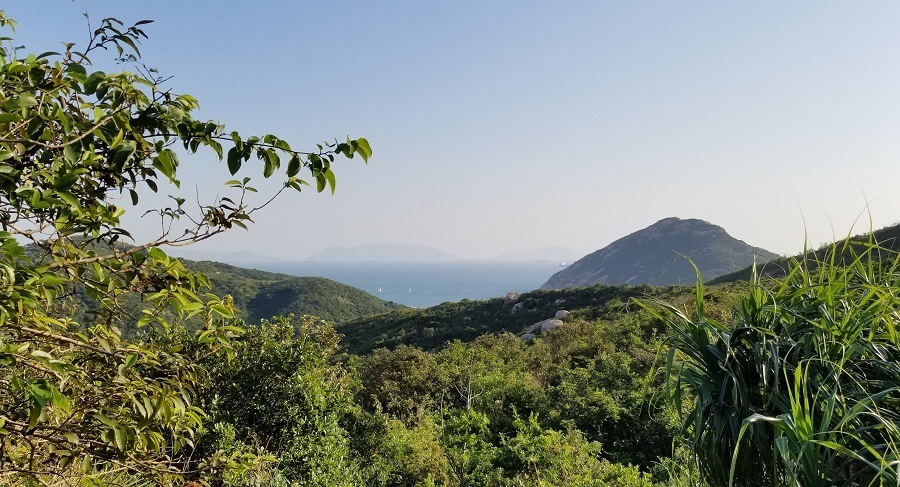 Heading back across the island to Sok Kwu Wan included climbing a few hills...

Once we reached the summit of our hike, we enjoyed sweeping 360-degree views of Hong Kong and the South China Sea.

Views of South China Sea from the top of our hike

After admiring the view, we continued the trail down the hill back towards Sok Kwu Wan. At this point, we were tired, hungry, and the hike had taken longer than expected. I always expect to move so much faster than my lazily exploring self does in reality!

Since we were almost back to Sok Kwu Wan, we could have ended our hike there. Could have gotten a bite to eat then taken the ferry back to Central from Sok Kwu Wan. But despite the time and our hunger, we decided to trek on Yung Shue Wan as we had planned. 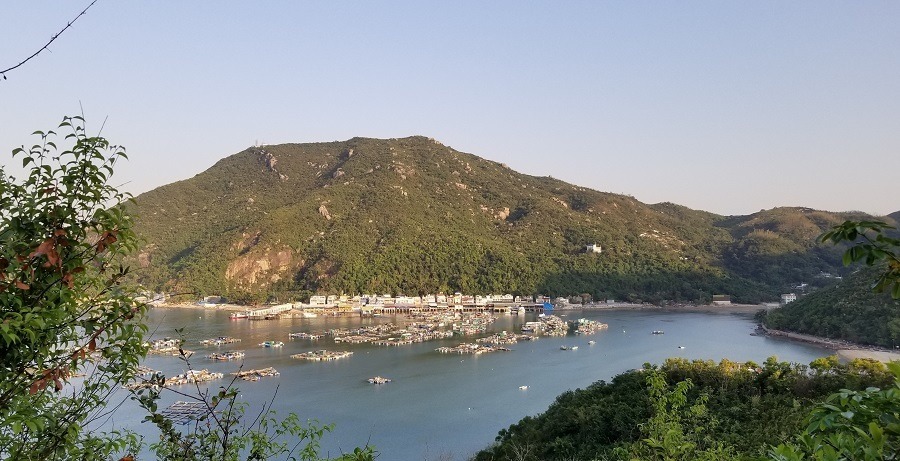 Sok Kwu Wan - from this angle you can really tell what a tiny fishing village it is!

As we walked away from Sok Kwu Wan, we came upon an elderly lady selling some sort of treat out of a cart next to her house.  Honestly at that point I didn't care what she was selling! I was so hungry I would've bought pretty much anything! It turned out to be what we think were mango mochi desserts. They were pretty tasty! 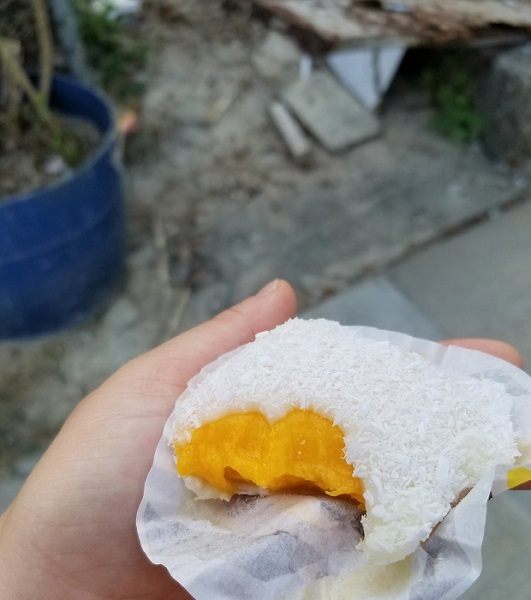 It was late afternoon by this point. We continued on the Lamma Island Family Walk up the steep incline towards Yung Shue Wan.

As we climbed, the evening glow lit up the hills and the water shimmered below. It was a beautiful time to be on this path.

Cresting the top and heading down the other side, we saw many young Hongkongers heading up towards us. They wore nice clothing and uncomfortable-looking shoes - no doubt in search of the perfect Instagram shot! I was a sweaty mess, so I skipped the photo shoot. 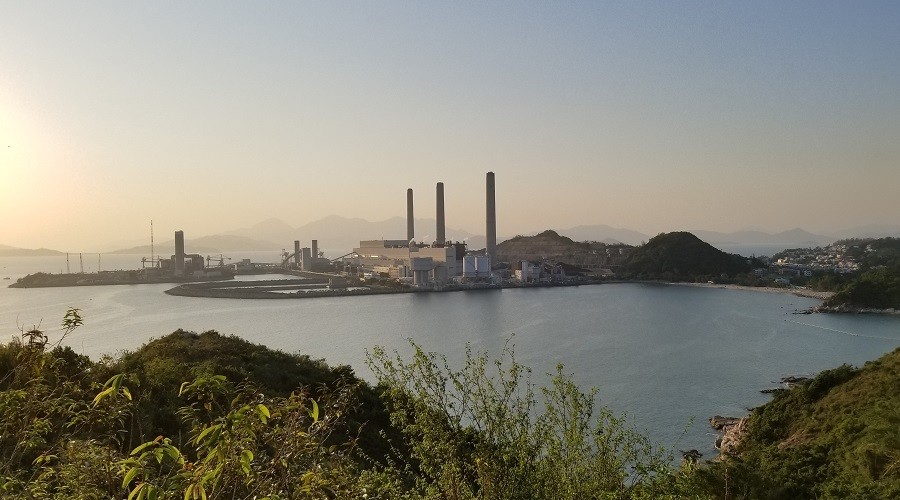 Lamma Power Station - not the most attractive feature of Lamma Island, but sort of pretty in the sunset...?

I’ll admit that we were rushing a bit on the downhill. Not only because we’d hiked it before, but also because we were determined to end our journey with a beer at the Yardley Brothers Beer Shack. It's always a highlight of our trips to Lamma Island. 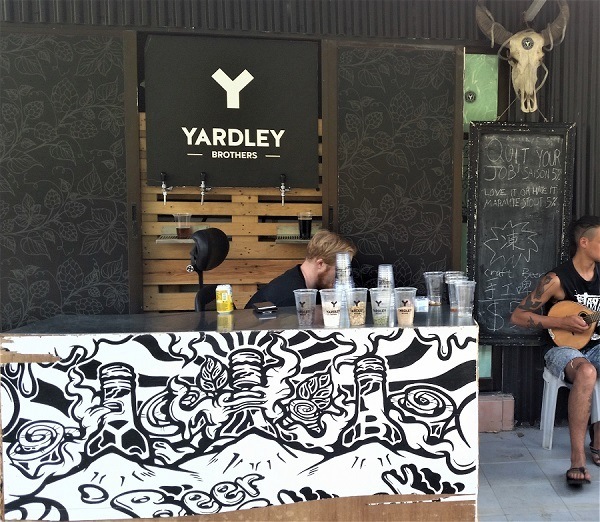 Located right outside of Yung Shue Wan, it's only open on weekend afternoons. They have a couple beers on tap and we always grab one as we go by.

The Yardley Brothers' "Beer Shack" is more than just a shack now! Their new home on Lamma Island is a shop closer to Yung Shue Wan. Though it's still right along the Family Trail.

Although they still serve take-away beers in plastic cups, their new place also has plenty of room to sit inside. With eight taps and a kitchen which serves food from 17:30-21:30, it's a great place to spend a couple hours sampling beer. 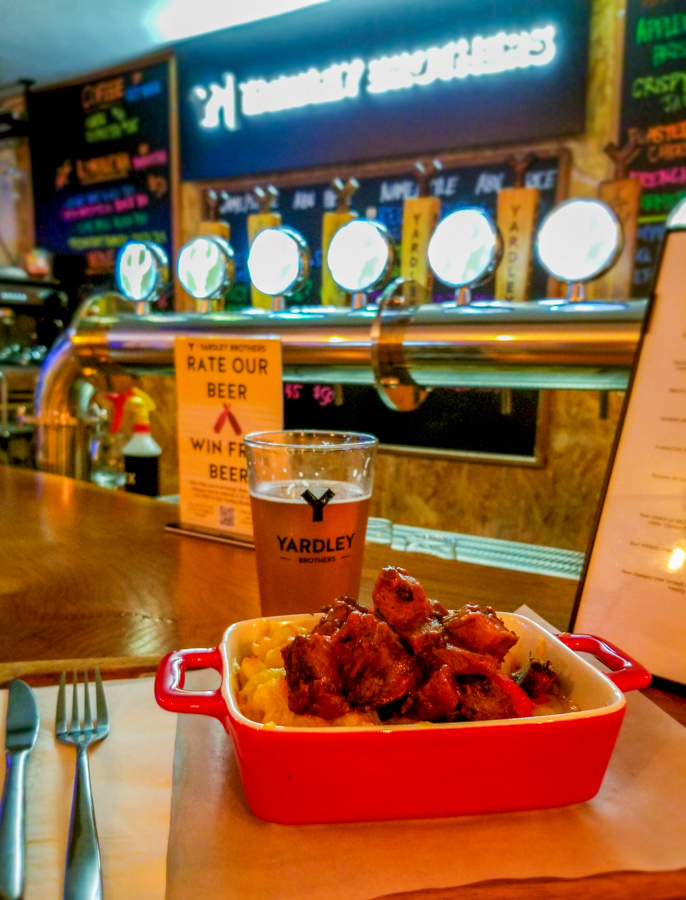 We made it to the Beer Shack before they closed! After ordering a beer, we headed back in the direction we'd come (~10-minutes) to Power Station Beach for sunset. If you look in the photo of the Power Station above, you can see the beach on the right side.

Unfortunately you can’t really see the sunset from that beach. But relaxing on a beach, listening to the crashing of the waves, watching dogs play, sipping on a good beer is a perfect way to end a hike! 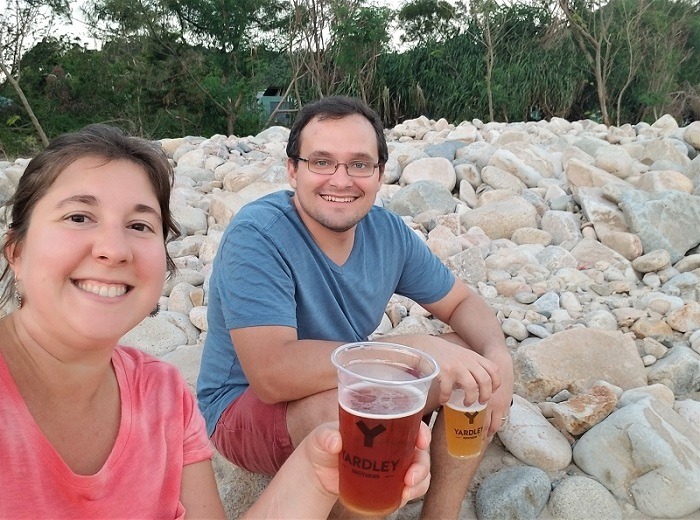 After finishing our beer, we were STARVING! This is another reason I recommend grabbing a seafood lunch before hiking the entire island!

More in the mood for western food, we decided to stop for a bite at Blue Goose Tavern - a British pub in Yung Shue Wan. It’s a casual place that seems especially popular with local expats. They have a back deck where you can sit overlooking the Yung Shue Wan harbor which is more family-oriented than the front bar. I had the fish n’ chips, Jeremy had the burger – both very tasty and huge portions! 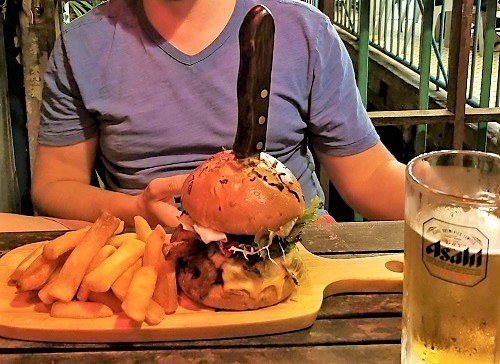 Look at the size of that burger!

Returning to Central from Lamma Island

After dinner we caught the ferry back to Central, Hong Kong. In under 30 minutes, we were transported from tranquil island life back into skyscraper island life! Just one of the many reasons living in Hong Kong is amazing.

Interested in Hong Kong hikes? Check out my post  on hiking 'Mui Wo to Pui O Beach'. 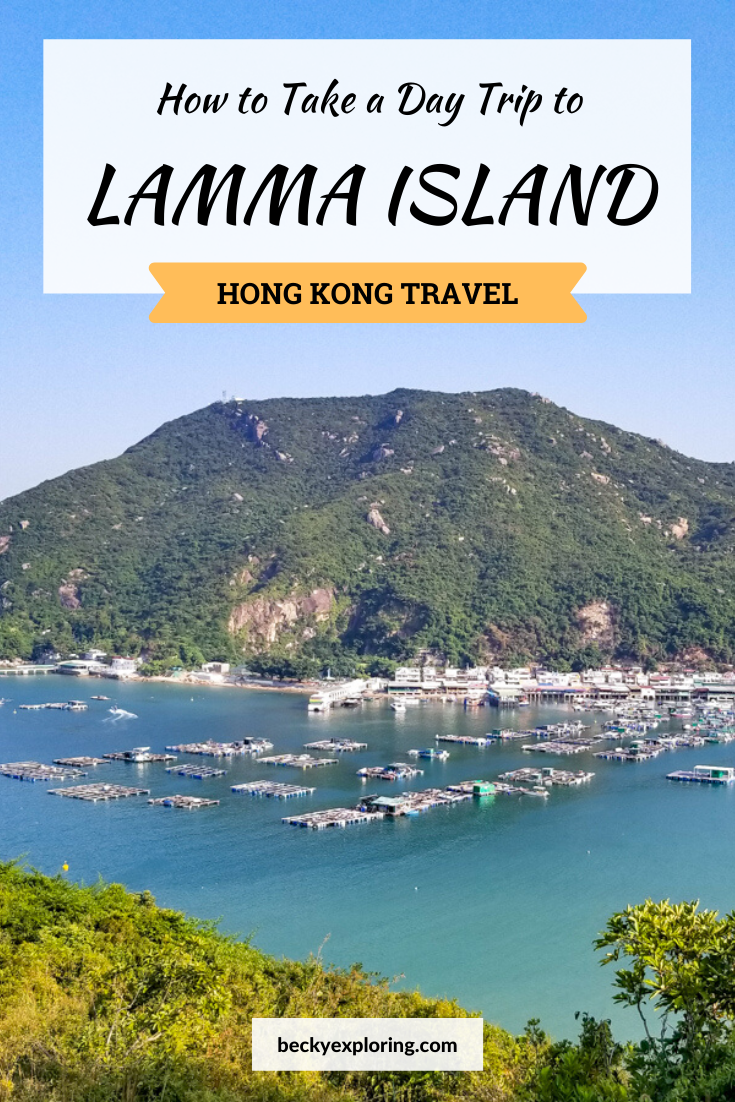 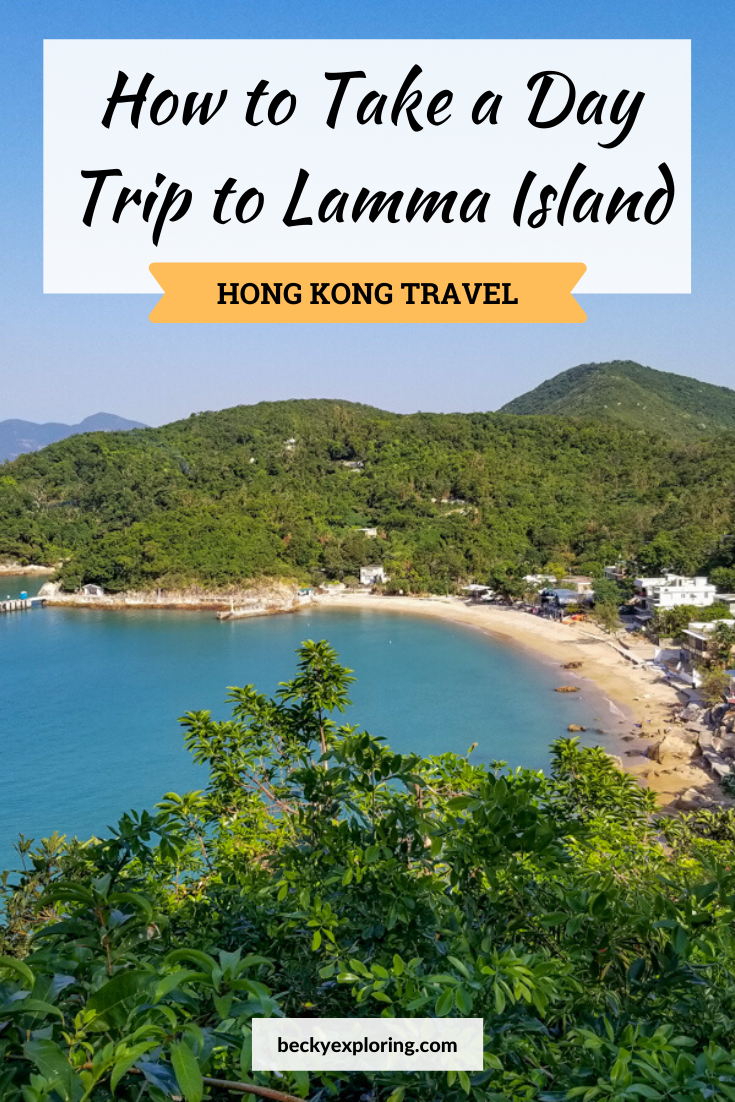