Lost Luggage in Lebanon (And How We Handled It)

When you’re traveling, lost luggage is a huge travel stressor. Even if it’s only lost for a day, it can be a major inconvenience. As you may have seen from my Instagram post, on our trip to Lebanon, our checked bag was delayed. This has happened to us before so we were prepared. But in Lebanon, we had to jump through some unexpected hoops to retrieve it. Since I think it's kind of funny, I’ll tell you the story. Plus, I'll share some travel tips to help you prepare in case your luggage is lost.

When I booked the flight on Turkish Airlines, I had a couple layover options in Istanbul – either ~1 hour or ~5 hours.

Pro Tip:  When booking non-direct flights, search for itineraries with at least ~2-hour layovers. That leaves a bit of wiggle room in case there’s a delay on your first flight. Not only will you avoid running through the airport to your next flight, but your checked luggage has a better chance of making the flight also!

Although 1 hour seemed tight, spending 5 hours in the airport didn’t appeal to me. So I decided to risk it. Part of me thought, if they’re selling this flight, we should be able to make it. (This is not always true.) So, I bought the tickets.

A Wrench in the Timing

As our trip approached, life and politics happened. Tensions between India and Pakistan flared up and Pakistan closed its airspace. For us, this meant that our 12-hour flight suddenly turned into a 13-hour flight since we had to fly around Pakistan. This diversion seemed like it would eat up our entire hour layover.

Now, we had serious doubts about whether we could make the transfer and no faith at all that our checked luggage would. As a result, I carefully considered what I would need (and want) to wear in the first couple days in Lebanon.

Pro Tip:  Always pack at least one change of clothes in your carry-on suitcase. If you have a short layover, perhaps pack a couple days' worth of clothes. Also, consider your other essentials - i.e. toiletries. Plan to bring small amounts of those with you in your carry-on.

Check out my 'Ultimate Guide to Preparing for  International Trip' for more planning tips and packing guides!

We got lucky. We left Hong Kong on time and the winds were with us, so we were only ~30 minutes late. This meant we had ~45 minutes to get to our new gate. Bad news – our plane didn’t have a gate, so we had to take a bus in. We were sitting at the back of the plane which we figured would delay us. But, we got lucky again! They pulled stairs up to the back of the plane too.

Once in the airport, we power-walked to the transfer desk. (I hate running through airports.) Though we had to go through transfer security, the line wasn’t long. Good thing too because every person in front of us in line seemed to be wearing a ton of metal and have buckets of change in their pockets. Had they never traveled before?!

Clearing security, we hurried to our gate – made it with 5 minutes to spare! At this point, I was sure our luggage was not going to make it. Though there's always that little glimmer of hope.... 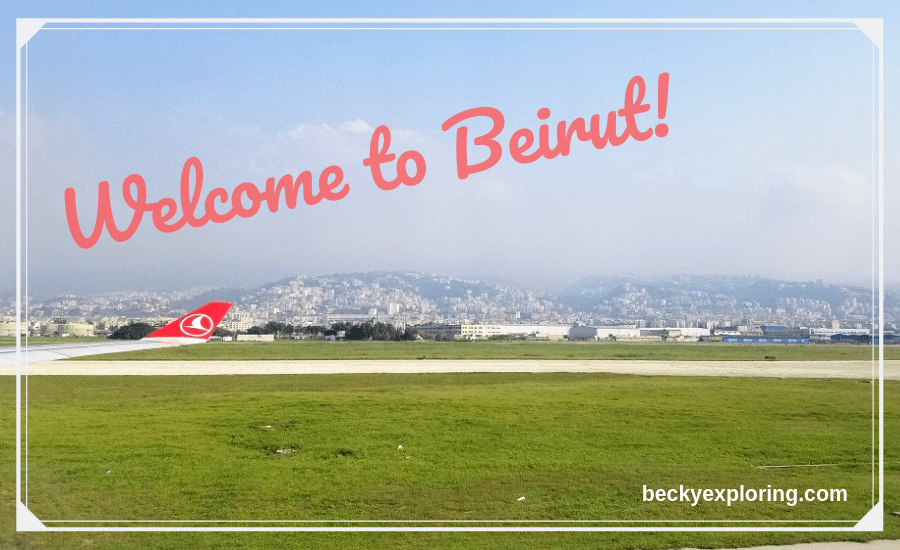 After a short flight from Istanbul to Beirut, we breezed through immigration and got to baggage claim. As we feared - no checked luggage for us. We didn't panic though as this was expected and it had happened to us a few years before traveling to Spain. That time, when our bag arrived, they delivered it to our hotel for us. Not so in Lebanon.

We immediately found the baggage claim information desk and reported our lost luggage. The employee at the desk informed us that if our luggage was found (if!?), we would need to come back and pick it up. He gave us a paper with the baggage information on it. We gave him a local phone number where he could contact us when they found it.

After taking care of that, we went on our merry way into the city... overpaying for a taxi since we got the “tourist tour” after telling our driver it was our first time to Beirut. Classic.

Pro Tip:  When traveling to Beirut, arrange your airport transportation through your Airbnb or hotel. Most likely, it will be cheaper. We did this on the way back to the airport and it was less than half what we paid to get from the airport to our Airbnb!

At any rate, we made it into Beirut and had a lovely day of sightseeing. That afternoon, our luggage arrived in Beirut and the baggage information folks sent us a message on the local number to let us know it had arrived. Since we’d brought all our necessities in our carry-on, we decided to wait until the next day to pick it up. We were planning to rent a car anyway, so by waiting, we avoided paying for a taxi to/from the airport again. 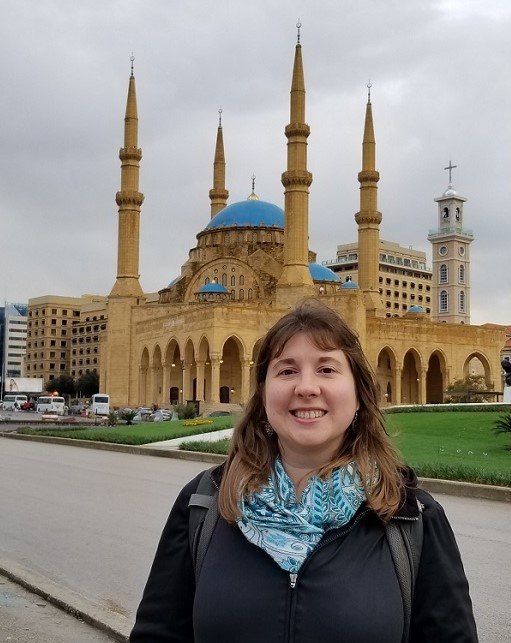 The next day, after picking up the rental car, we drove out to the airport to collect our luggage. My sister-in-law who had been living in Beirut for ~2 years came with us. (Thankfully!) We've only lost our luggage a couple of times. So, I'm not sure if the situation that we went through is standard in some countries, but it was a bit of a mess. Here's the story...

Phase 1 – A Counter with No One

Arriving in the airport, we weren’t sure where to go. After getting directions from a policeman holding a large gun, we found the right desk. Or so we thought.

When we got to the front of the line, we asked the attendant about our luggage. “Turkish Airlines?” he asked. We nodded. “That’s the next desk over,” he told us. Great – we’d been standing in the wrong line. We walked over to the next desk. There was no one there.

We waited and waited – at least 15 minutes passed. We kept watching for anyone who looked like an airport employee to head towards the desk, but no luck. Posted on the door behind the counter was a phone number. My sister-in-law – who has a Lebanese SIM card – decided to call it.

Apparently they only have 1 person who works both baggage claim desks - inside security and outside…? But, calling did the trick and a few minutes later, someone came to the desk to help us. If Jeremy and I had been on our own, I’m not sure how long we’d have waited for someone to come out. Definitely one perk to buying a local SIM card!

After giving the man our information, he handed me a piece of paper (the luggage was in my name). He said, go upstairs to the Luggage Claims Office (or something similar) and get this signed so you can re-enter baggage claim. I was not expecting that - I thought he'd just give me my bag! He pointed me towards the other end of the airport. So, off we went again….

After walking to the far end of the airport, we had to ask for directions again (I wonder how often this happens). We backtracked a bit to a long beige hallway with a metal detector at the end where we'd been directed. Once through security, we went up the elevator to the second floor of the terminal.

An office building from hell, was my first thought when the doors opened and I gazed at the maze of light grey walls and dark grey doors. We wound our way through the maze, following the signs for the office we wanted. Literally the furthest one from the elevators.

We recognized a couple people from the line beside ours in the office, also getting a paper signed. It took 2 seconds to get the paper signed. But then we had to find our way back through the maze. A security guard helped us out at one point, chuckling to himself. At this point, I was sure I was in a sitcom or a reality prank show.

Back down the elevator and all the way back across the airport we went.

Phase 3 – Behind the Scenes

Since the luggage was in my name, I was the only one authorized to go back through security and into baggage claim. I went in and wouldn’t you know it – the Turkish Airlines counter is conveniently located the entire way back across the terminal! I think I got all my steps in at the airport that morning before we even went sightseeing!

Finally, I made it to the Turkish Airlines counter. Someone was working the desk! Hurray! He ushered me into a back room filled with luggage organized by passenger last name. We worked our way over to the Z’s. He turned to me, then gestured to the luggage, as if to say, “So which one is yours?” I felt like I was being tested.

Luckily, I can always spot our suitcase, even though it’s black like millions of others. I grabbed it. He double-checked the luggage tags and we left the back room. At this point, I only had to exit customs with my suitcase and I was free!

Be prepared to spend at least an hour collecting your lost luggage from the Beirut airport. We spent about 1.5 hours between the drive to the airport and getting the suitcase. It’s a lot of waiting and walking.

Ultimately it was still worth it for us to take the 1-hour layover flight instead of the 5-hour one. We got to spend more time with family in Beirut the day before vs. being in Istanbul for 5 hours by ourselves. Plus, since we were planning to rent a car anyway, it wasn’t that much of a hassle to drive back to the airport.

The best part about getting the suitcase – I had my winter coat for the snowy mountains that afternoon! 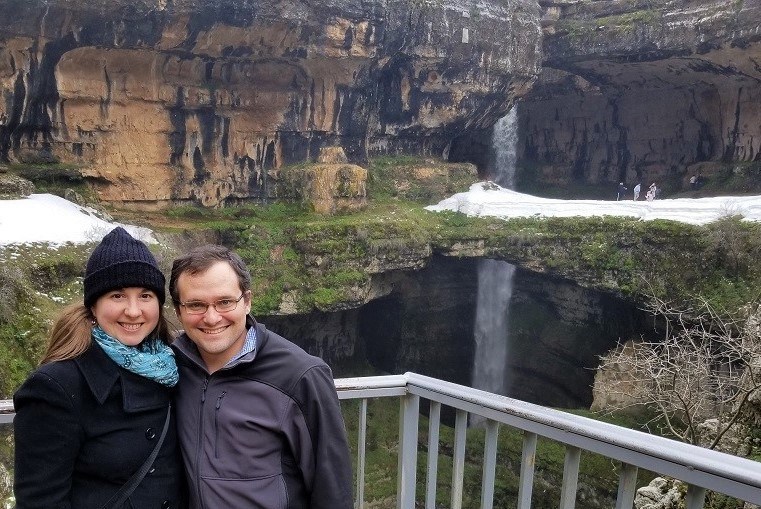 Visiting Baatara Gorge Waterfall - much cooler up there in March than in Beirut! 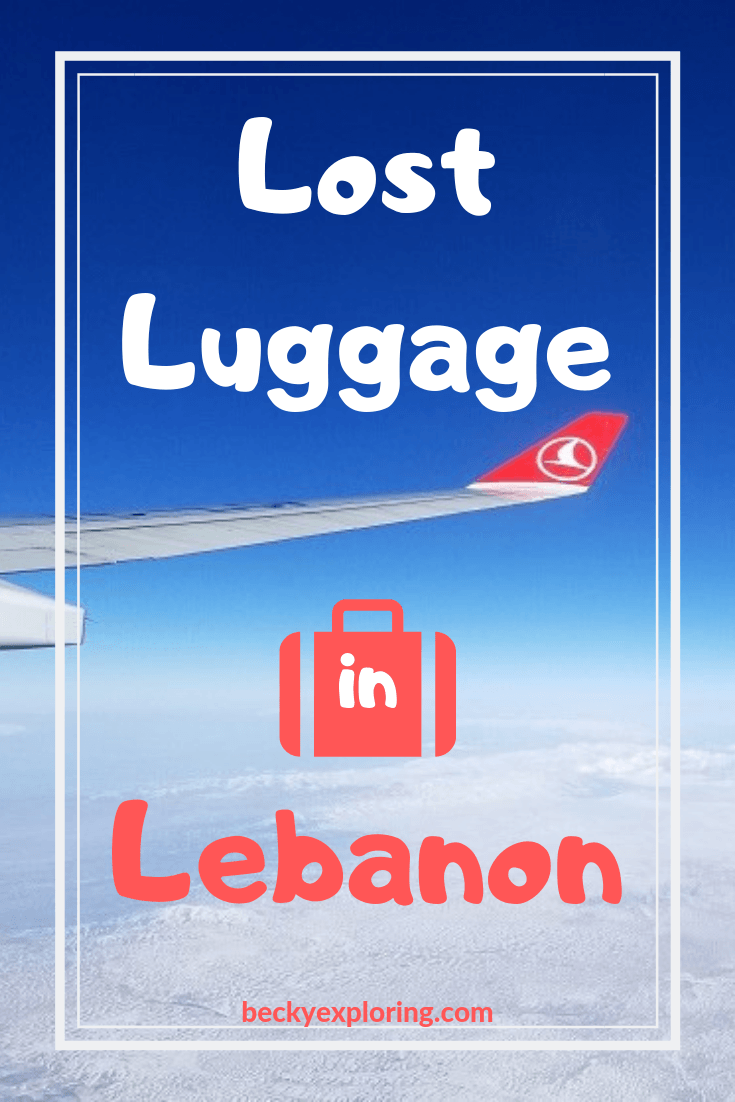 Read More
How to Plan an Awesome Trip to Italy

Luxurious Staycation at the Mandarin Oriental in Hong Kong

15 Practical Tips to Help You Save Money for Travel