Mui Wo to Pui O Beach Hike on Lantau Island

There’s nothing better during winter in Hong Kong than waking up, looking out the window, and seeing clear skies. When this happens, we head for the hills… to hike! This time, we hopped on a ferry to Mui Wo on Lantau Island. Lantau is the second largest island in Hong Kong and has a ton of hiking trails with varying levels of difficulty. We like hiking to a destination so we chose Pui O Beach.

Preparing to Hike from Mui Wo to Pui O

The hike from Mui Wo to Pui O Beach is a moderate 9-km hike on Lantau Trail Section 12. It gains ~260 meters in elevation and takes around 2.5-3 hours.

Although you can hike it in either direction, the ascent to Tai Ngau Wu Peak is more gradual going from Mui Wo to Pui O Beach.

Tip:  Unlike some of the trails in Hong Kong that are paved, the Mui Wo to Pui O Beach trail is a dirt path with lots of rocks. I recommend wearing sneakers or other hiking footwear.

Getting to Mui Wo

Since Mui Wo is on Lantau Island, you'll need to take a ferry to get there from Hong Kong Island. Head to Central Ferry Pier no. 6 for the ferry to Mui Wo.

We took the fast ferry which takes ~30-minutes from Central to Mui Wo. The ride costs HK $45.00 (~US $6) one-way. The ordinary ferry takes closer to an hour but is slightly cheaper.

Tip:  If you’re going on a Sunday or public holiday, be sure to click on the second tab of the scheduling chart. The times vary slightly from the Monday-Saturday schedule.

The Hike from Mui Wo to Pui O Beach

Below is a map of the route we used on our hike from Mui Wo to Pui O Beach. If you click on it, you can follow it as you hike this trail. 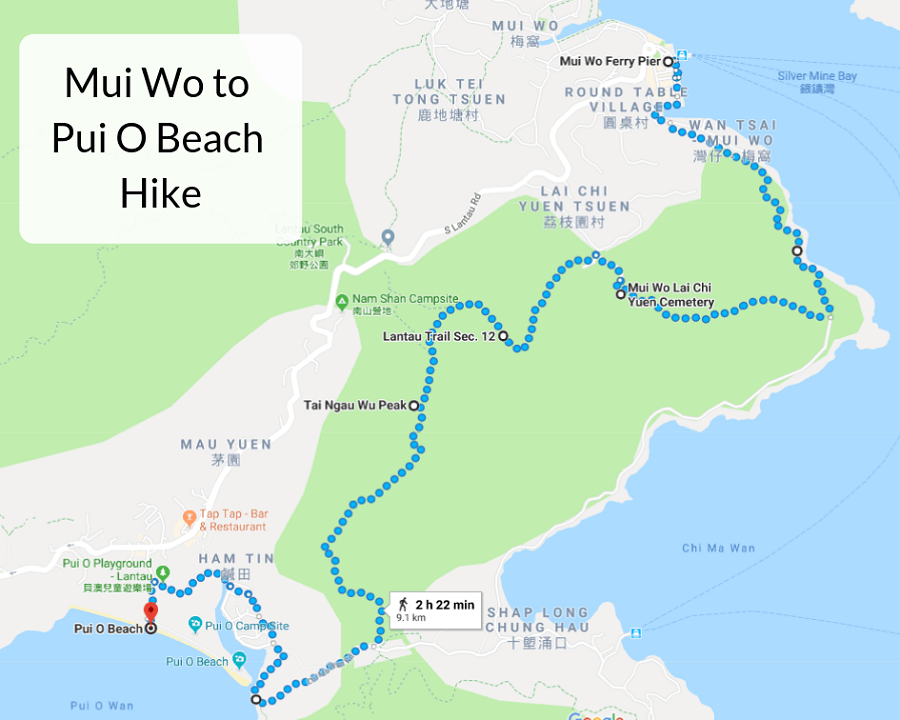 Starting in Mui Wo

Once you arrive in Mui Wo and disembark the ferry, head left out of town past the bus station and along the row of restaurants. Make a mental note about which one looks good for dinner!

After you curve around a small inlet, you'll see a trail marker and a set of stairs to the right. This is the start of your hike. 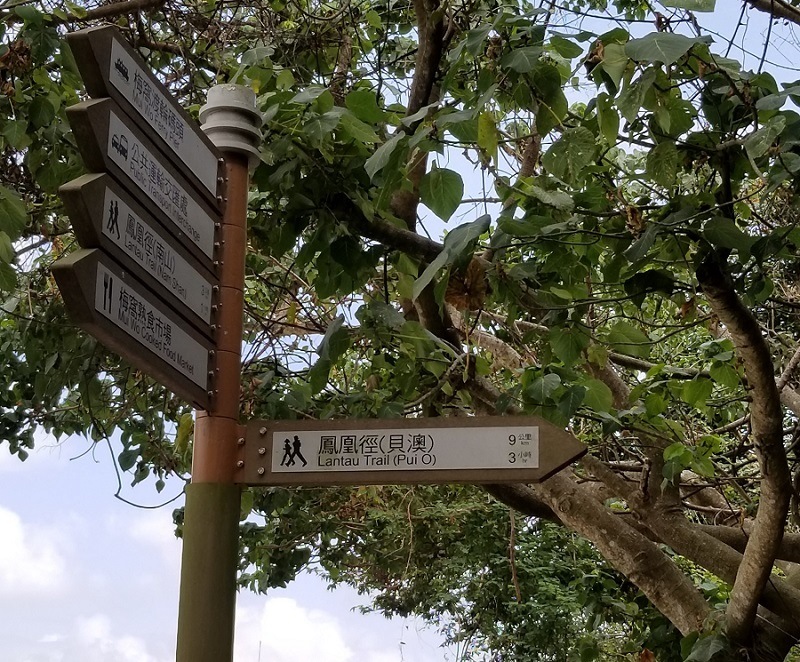 The first part of the hike is easy after the initial stairs. The trail follows the coast and you get great views of Hei Ling Chau, the island across the water.

Since Hei Ling Chau is basically just home to prisons and drug rehab centers, you probably won't find a reason to visit that island! 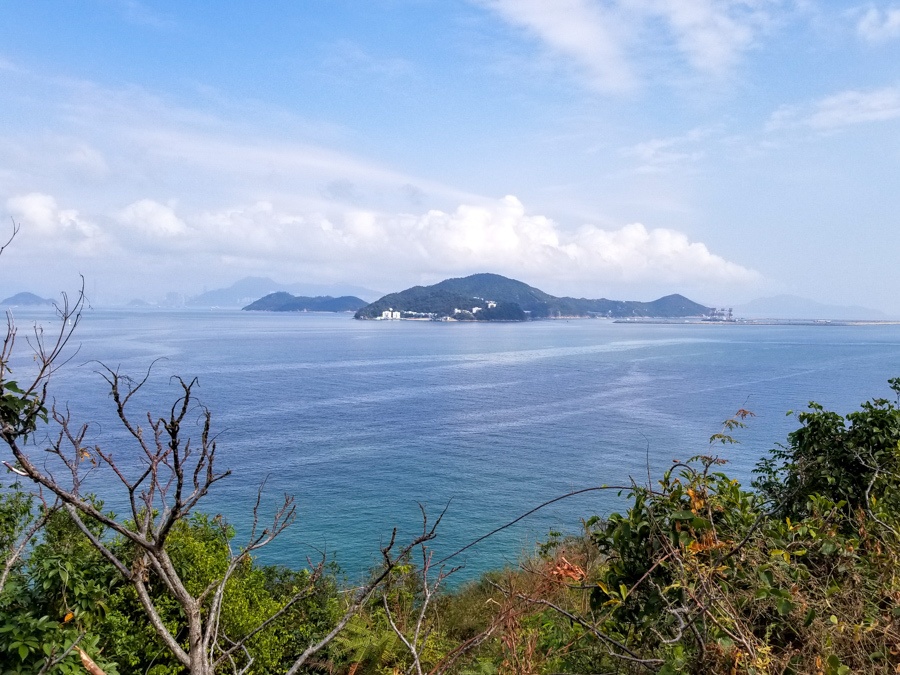 When you come to a fork in the trail about 2 km in, turn right to go inland and start heading up the hill.

The path evens out again for a while as you walk through the woods. Looking out to your left, you can see Chi Ma Wan and its ferry pier. 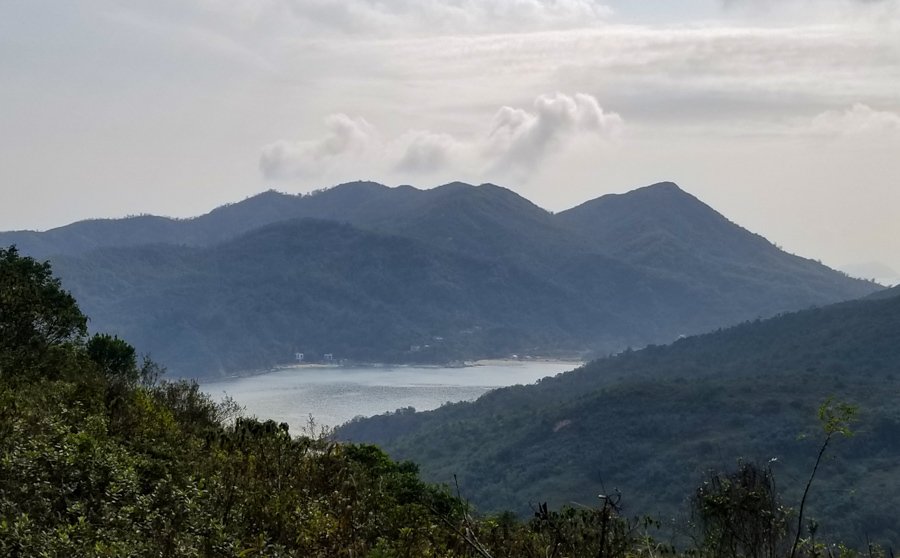 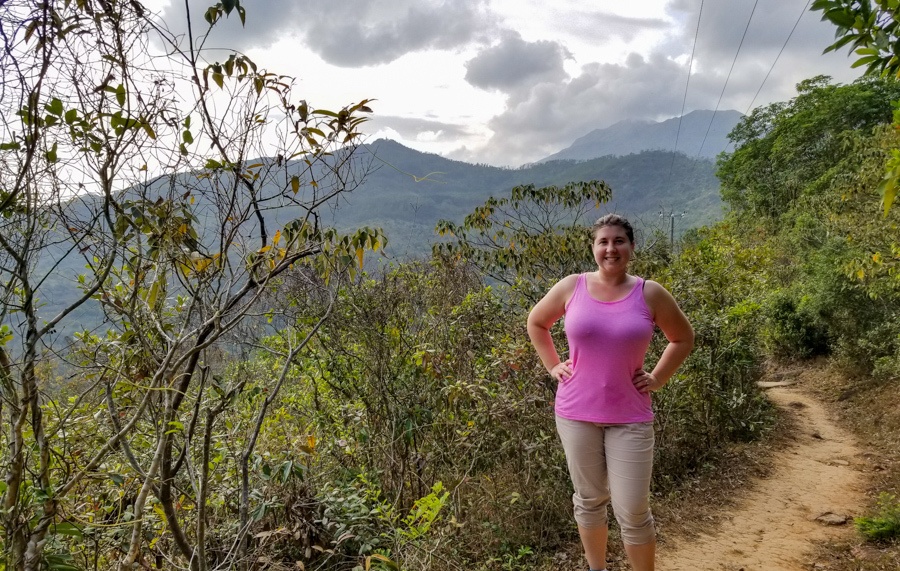 "Really enjoying this flat hike..." I said - right before the hill!

Eventually, you’ll come to a paved path and if you keep following it, you’ll end up back on the main road. Instead, take the trail to the left to continue the hike.

The next section up to the peak is the steepest uphill section going towards Pui O. Climbing up several steep stairways, I kept telling myself, at least it isn’t summer! Though the sweat pouring down my face would seem to suggest otherwise…. 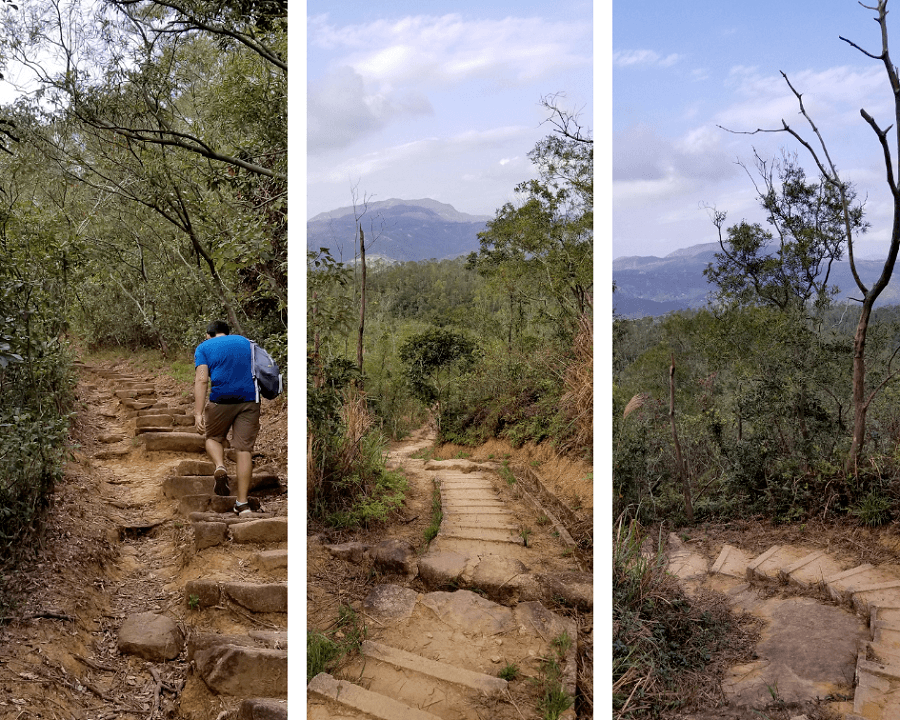 Many varieties of stone and concrete steps on the climb to the peak. Great views though!

Like hikes with amazing views? Check out my Complete Guide to Hiking Mount High West!

Finally, we reached Tai Ngau Wu Peak! The view was amazing! Clouds hung on the taller peaks of Lantau and the afternoon sun gave everything a soft and shimmery feeling. I welcomed the cool breeze blowing up from Pui O! 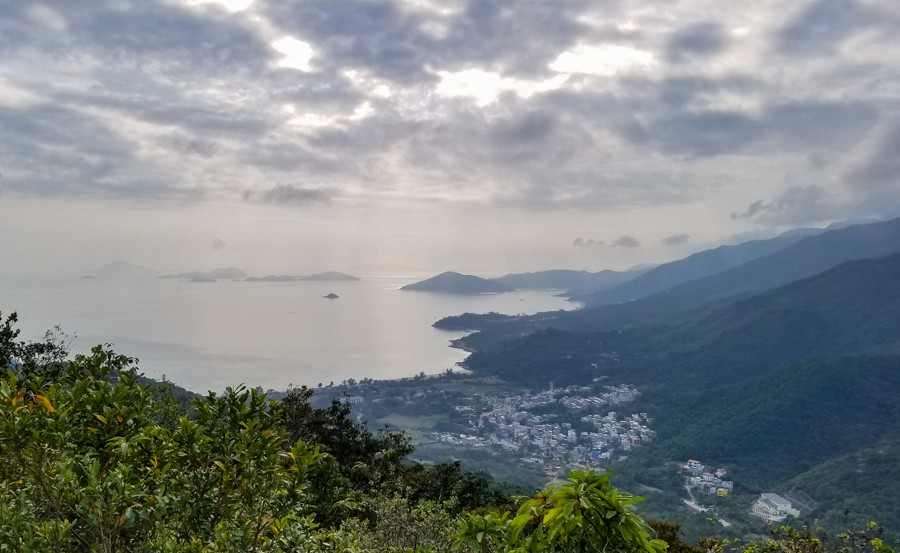 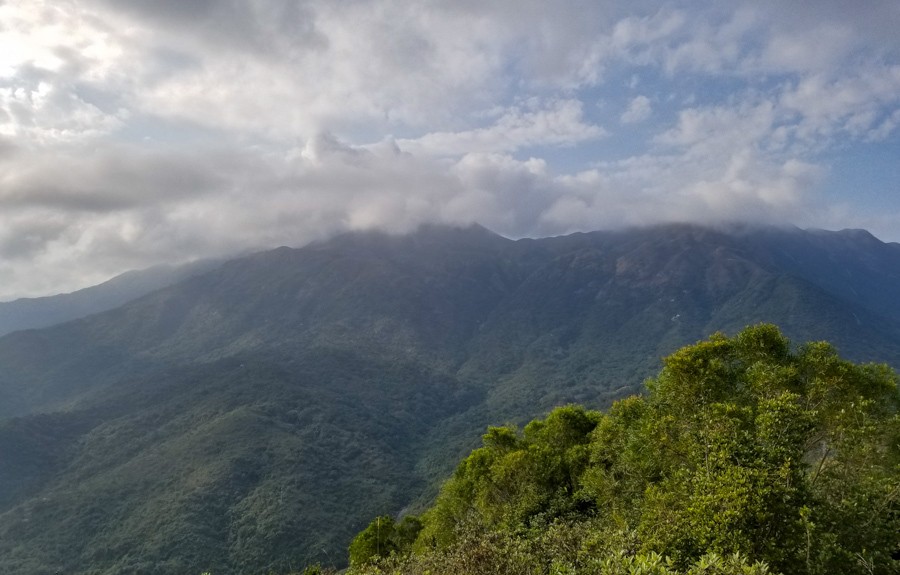 Clouds sitting on the peaks of Lantau Island.

Steep Descent to Finish the Trail

Once we finished taking all our pictures and drinking a ton of water, we continued steeply downhill to finish the trail.

I recommend hiking the direction we did - Mui Wo to Pui O Beach - unless you’re looking for the route’s maximum workout!

If you're looking for an outdoor workout in Hong Kong, check out The Twins Hike from Wong Nai Chung Reservoir to Stanley! 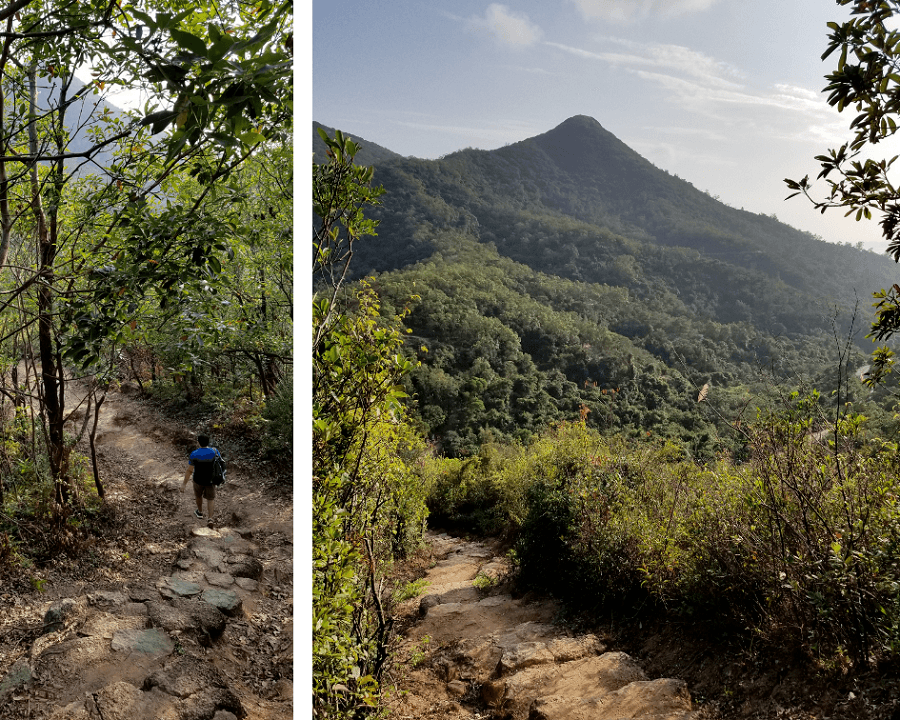 The path of stairs going down the other side of the peak....

Once you reach the paved road, you've finished your hike (mostly)!

If you aren't quite ready for the hike to end, you could cross the road for a loop hike on the Chi Ma Wan Peninsula.

But if you're ready to head for the beach, turn right to head towards Pui O. When you arrive in the outskirts of town, you approach the water near Tin Hau Temple. 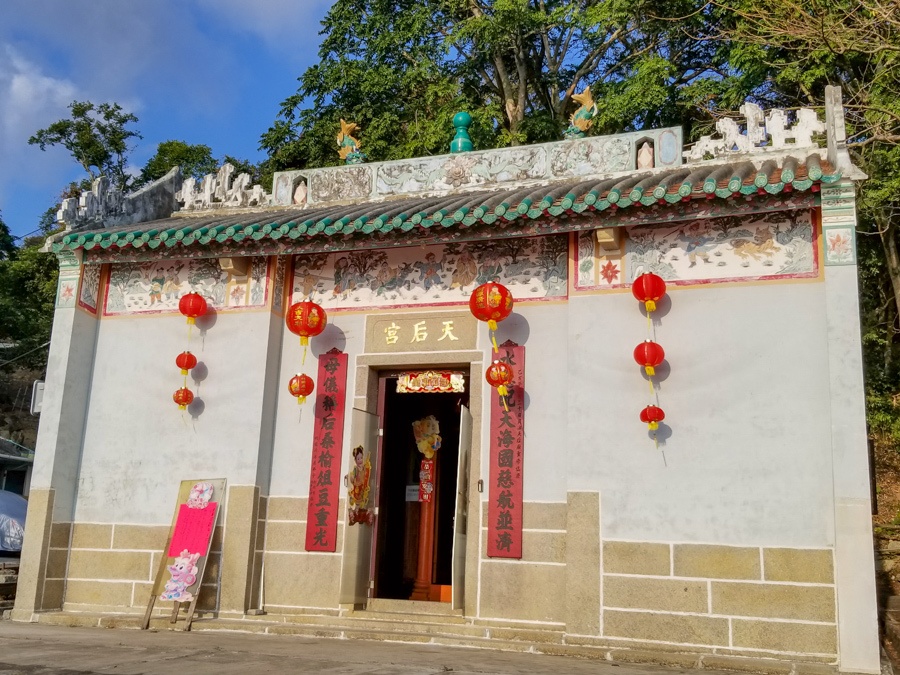 Although you can cross directly to the beach from here, you'd have to wade through a questionable-looking stream to get there. At the time, the stream looked about calf- to knee-high deep.

We decided to walk through town and come around the peninsula. 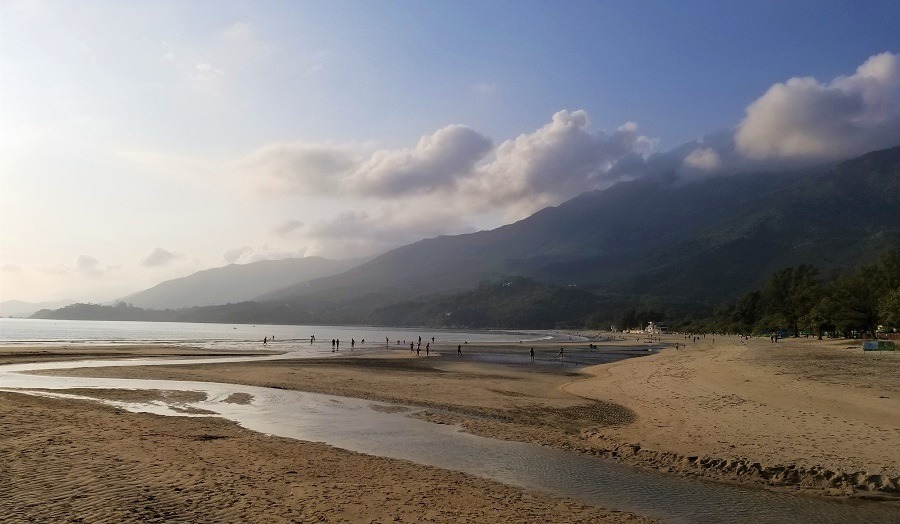 Pui O Beach and the stream cutting us off from the beach.

On the way to Pui O Beach, we walked through some of the residential areas of town. Some of the new apartments look nice, but I don’t envy them their commute!

We also saw LOTS of buffalo roaming and grazing. On Lantau Island, the buffalo and cows are not fenced so they wander the island. Be careful where you step at all times! 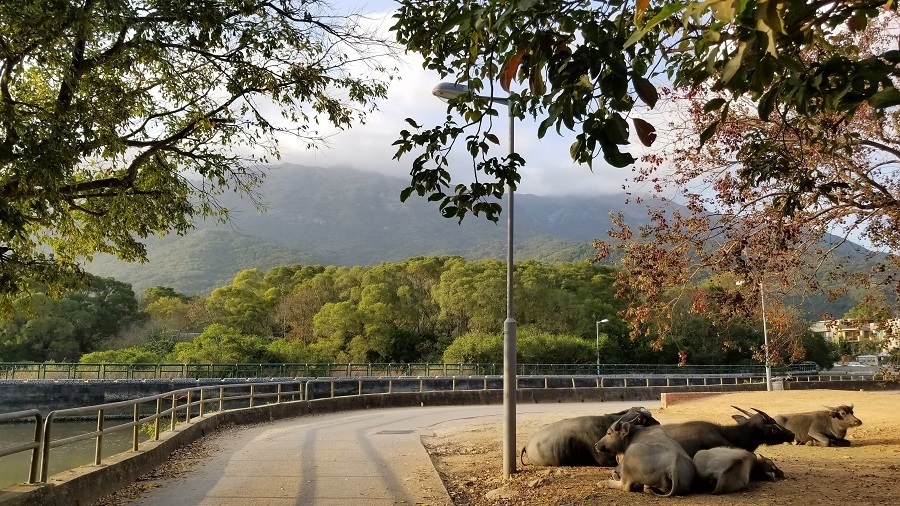 Water buffalo chilling at Pui O - the first of many we saw.

Arriving at Pui O Beach just before sunset, we grabbed a couple Tsingtao beers from a shop, and watched the sun set over the beach.

The beach has a campground, some small store vendors, and public changing and shower facilities. It would be easy to spend the day here relaxing on the beach.

For more beach hikes, check out the Dragon's Back to Big Wave Bay Hike or the Hike to Ham Tin Beach in Sai Kung! 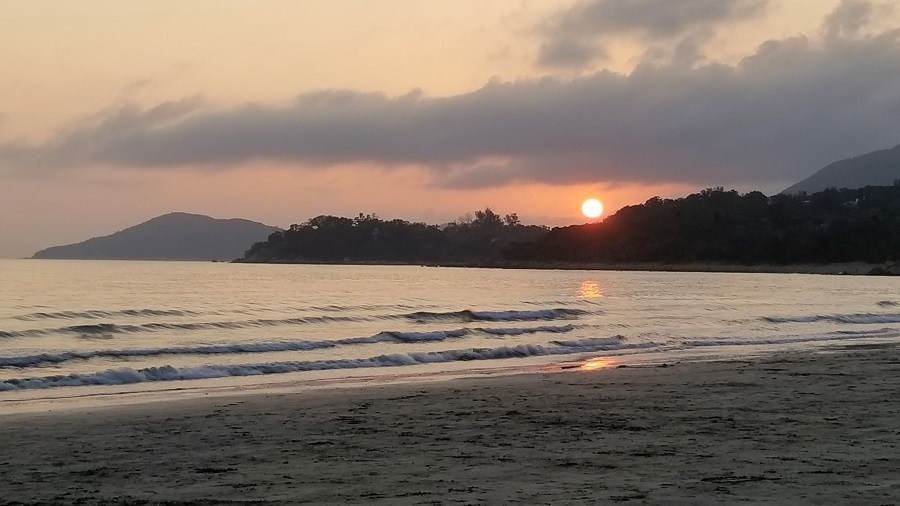 Bus from Pui O to Mui Wo

Since we decided to go back to Mui Wo for dinner, we headed to the main road to catch a bus.

Depending on the time of day you decide to go from Pui O to Mui Wo, you may have to wait for a bus for a while. We had a couple buses pass us, packed full of people from further down the route.

When we finally got on the bus, it was a 10-15-minute ride back to Mui Wo. You could opt to take a taxi instead though we only saw a couple around.

New to Hong Kong? Check out my post 'Guide to Using Public Transportation in Hong Kong'. 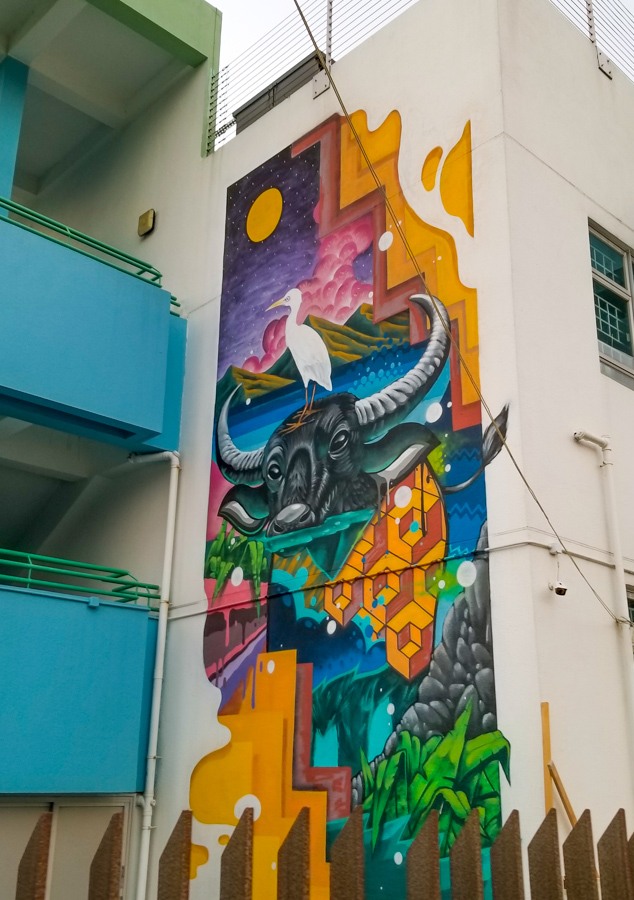 Heading up to the bus stop, we saw a great mural - they love their water buffalo on Lantau!

Dinner in Mui Wo

Back in Mui Wo, we ate dinner at China Bear, a British-style pub with a view of the water. I highly recommend the steak and Guinness pie. It was full of flavor, the meat was tender, and the crust had a nice crunch to it.

Steak and Guinness Pie - delicious! (photo from a different day)

Even though we were sitting outside, luckily we chose a table further into the seating area. As we were waiting for our food, a herd of cows came through town and one decided that a patron’s fries looked appetizing!

Between the man and the servers, they were able to save his fries, but the cow had to be bribed away with apples before she left. You don’t get that experience on Hong Kong Island! 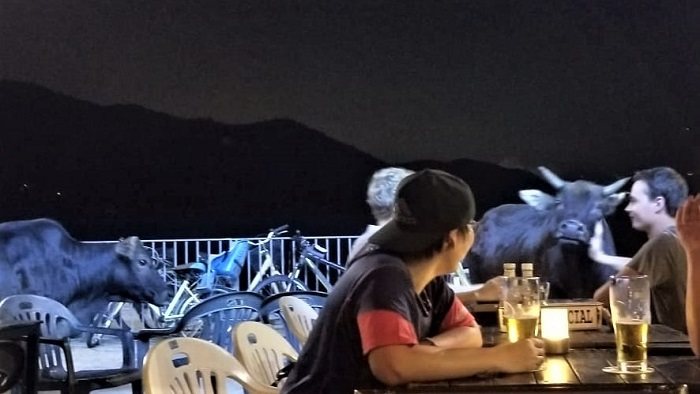 Ferry from Mui Wo to Central

Since China Bear is right next to the ferry pier, it only took a couple minutes to walk over and hop on the ferry back to Central.

Find more hikes in Hong Kong and abroad on the Hiking Guides page! 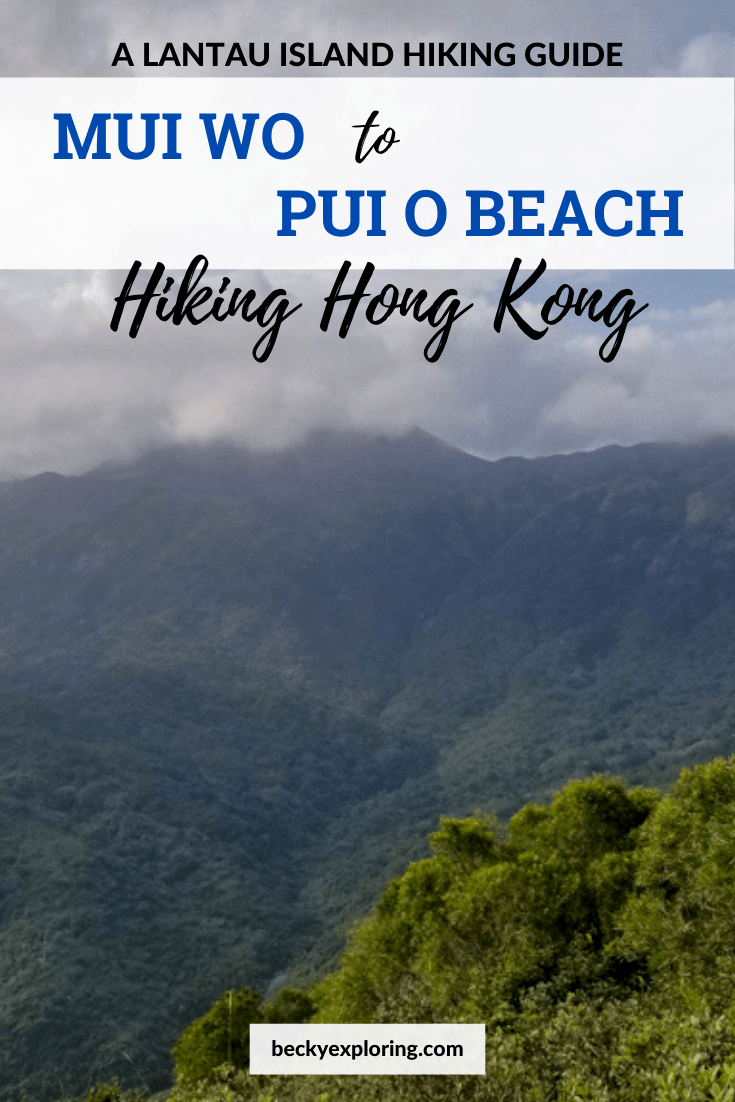 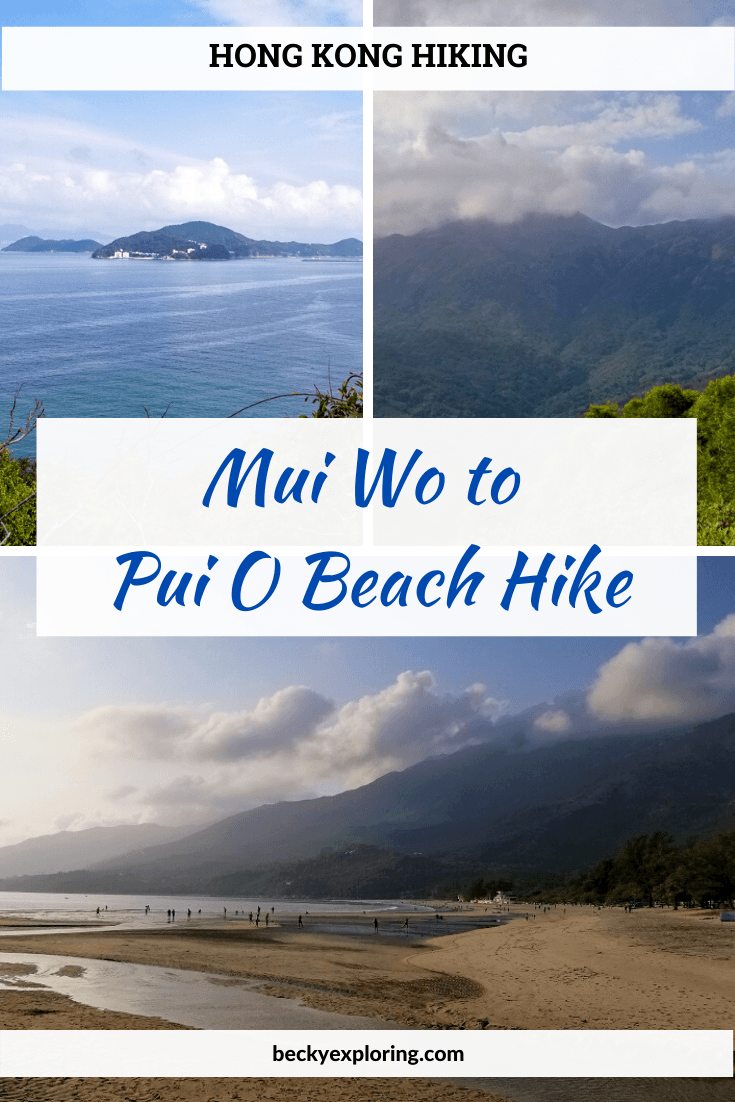 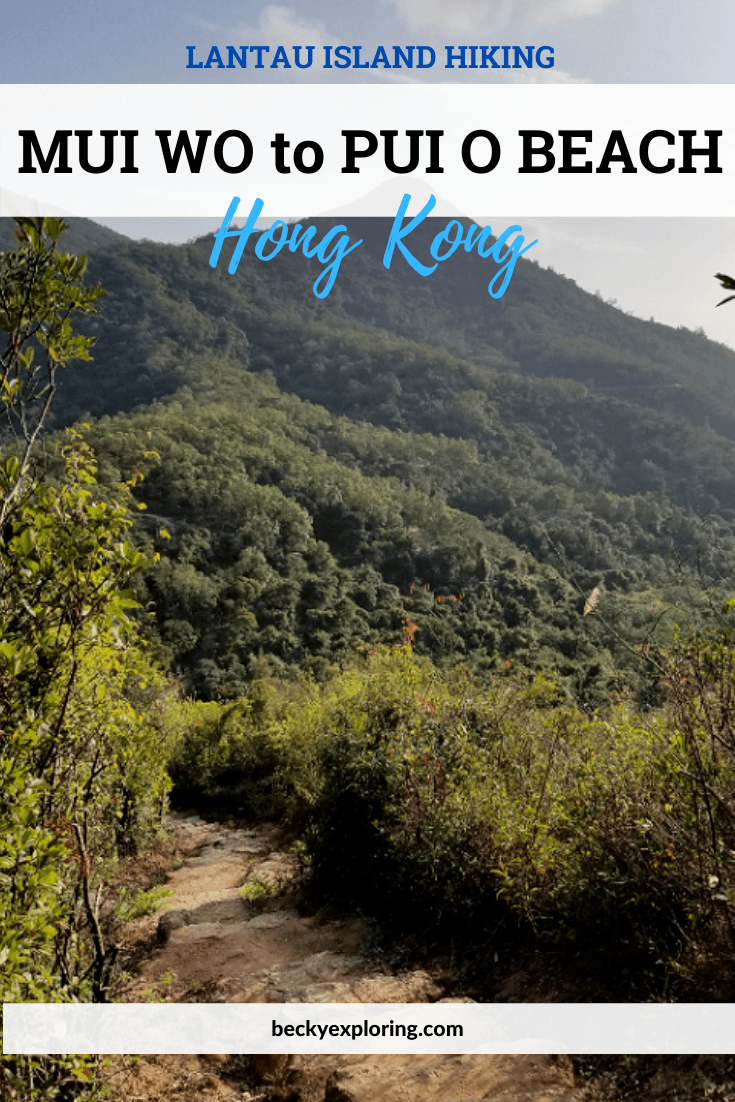