A Splendid Staycation at The Peninsula Hong Kong

Since the end of 2020 is drawing near and international travel still seems like a distant dream, another staycation treat in Hong Kong was in order. For our second staycation, my friend and I chose The Peninsula Hong Kong. This historic hotel on the Kowloon Peninsula is known for its colonial elegance and luxury. Combine that with an incredible staycation + dining package deal and we couldn't resist! In this post, I'll share my staycation experience and overall review of The Peninsula Hong Kong.

This post contains Booking.com affiliate links which means I receive a small commission if you book a stay through that site. This won’t cost you anything extra but helps support this blog. Lastly, my staycation at The Peninsula Hong Kong was funded by me so this is not a sponsored post. Thank you for your support!

Why Go on a Staycation?

As you may remember, I was initially skeptical about whether a staycation would be worth it. Hong Kong is not that large and its public transportation system easily gets you back home no matter where you are.

However, after my last staycation at the Mandarin Oriental in Hong Kong back in August, I realized that a staycation is a great treat! Getting away to pamper myself and pretend I'm on vacation was refreshing after several months of no traveling.

So with this in mind, my friend and I decided to book another staycation.

The hospitality industry in Hong Kong has been hit hard over the last year. As a result, many hotels began offering staycation packages to entice Hong Kong residents to book a stay. Tourists have not been allowed into Hong Kong since March. However, now all HK residents returning from abroad must quarantine at a hotel for 14 days, so perhaps that will help the industry.

Read the full post about my Luxurious Staycation at the Mandarin Oriental in Hong Kong.

The Peninsula Hong Kong is a historic landmark which opened in 1928 with the idea that it would be a top luxury hotel in the region. As such, The Peninsula has always been on my radar and I've wondered what it would be like to stay there. My friend felt the same way, so we decided to book it for our second staycation together. 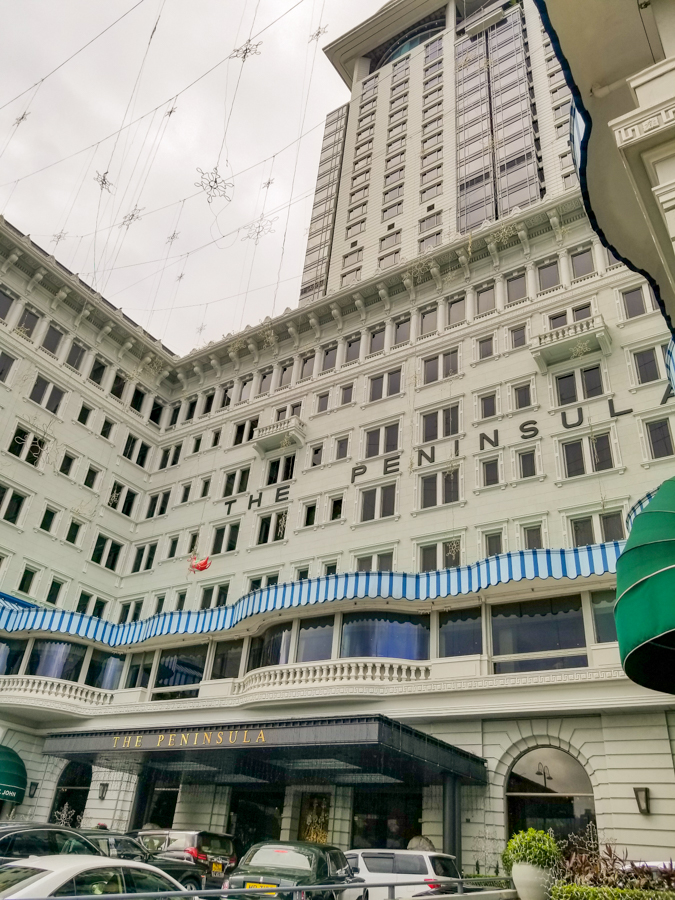 At the time we booked, The Peninsula was offering a Stay and Dine Staycation Package* which included:

*This particular deal has expired. Check The Peninsula Hong Kong website for its latest special offers.

Getting to The Peninsula

Once you're in one of these stations, take exit L3 out of the MTR which brings you out right across from the backside of the Peninsula.

Last weekend when we stayed at The Peninsula, COVID-19 restrictions were limited. Restaurants and facilities were open, but with reduced capacity and social distancing measures in place. This meant we had a much more normal hotel experience at The Peninsula than we did during our last staycation back in August.

How many of these 16 Incredible Things to Do in Hong Kong have you done so far?

We kicked off our Peninsula staycation with the famous Peninsula Afternoon Tea. This is one of those classic Hong Kong experiences that all the guides say you "must do" when you visit the city. Since it's such a sought-after experience, afternoon tea at The Peninsula is quite expensive (HK $748/ US $95 for 2 ppl). Having it included in the staycation package was a great perk.

Instead of having the afternoon tea in the Lobby, we opted for The Verandah - a continental restaurant on the first floor. It's a much quieter scene than the Lobby where the afternoon tea is normally served. Plus, we had a view of the Hong Kong Cultural Centre, as well as a bit of the skyline on HK island.

Luckily I'd had the Peninsula's afternoon tea previously, so I knew not to eat lunch beforehand. The warm, buttery scones by themselves are so filling - and they're just the start! My favorite was probably the pistachio macaroon which tasted so fresh and delicious.

Check In at The Peninsula

After stuffing ourselves to the max, we headed back downstairs to check in to our room. Similar to our last staycation, we filled in a health declaration form and used our Hong Kong IDs to check in.

Because we'd already had our temperatures checked as we walked in the hotel doors, that was unnecessary when checking in. Most buildings these days have temperature checks as you enter so it's something we're used to in Hong Kong.

Once we finished checking in, we made our way to our room on our own. Since The Peninsula is a 5-star hotel, I'm not sure if this is normal or just because we had no luggage with which we needed assistance.

Honestly, I prefer to find my own way and always feel awkward when someone escorts me and wants to show me around my room. Apparently I'm not fancy enough yet to be comfortable with that! 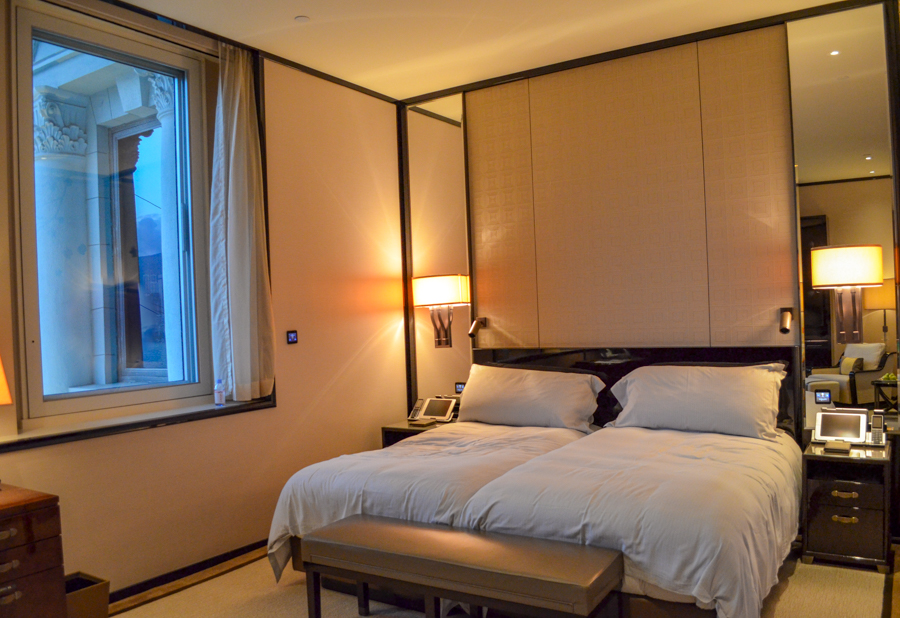 Our deluxe courtyard room was incredibly spacious! We laughed about how much space was in the center of the room since the twin beds were smushed together. I said, I bet I could do a cartwheel in here! So then of course, I did.

The room had a much better view than I was expecting since we booked the lowest-priced room option. We faced Victoria Harbour and had a great view of the Hong Kong Island skyline. 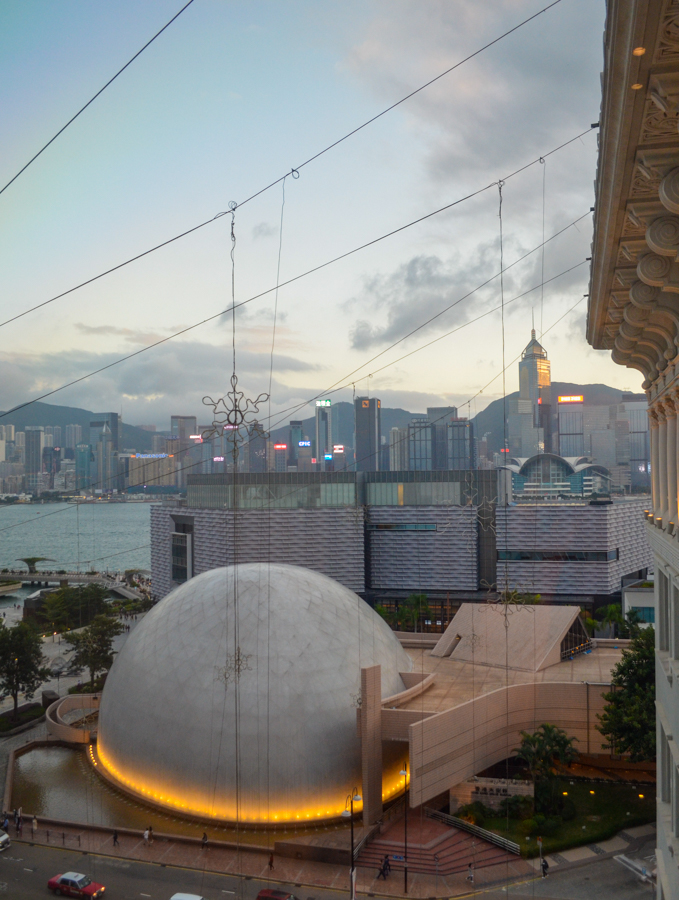 View from the Deluxe Courtyard Room at the Peninsula

We were delighted to find plenty of luxurious amenities, such as comfy robes and slippers. Some of the features we liked were:

After we checked out the room, we decided to see what other amenities the Peninsula has to offer. 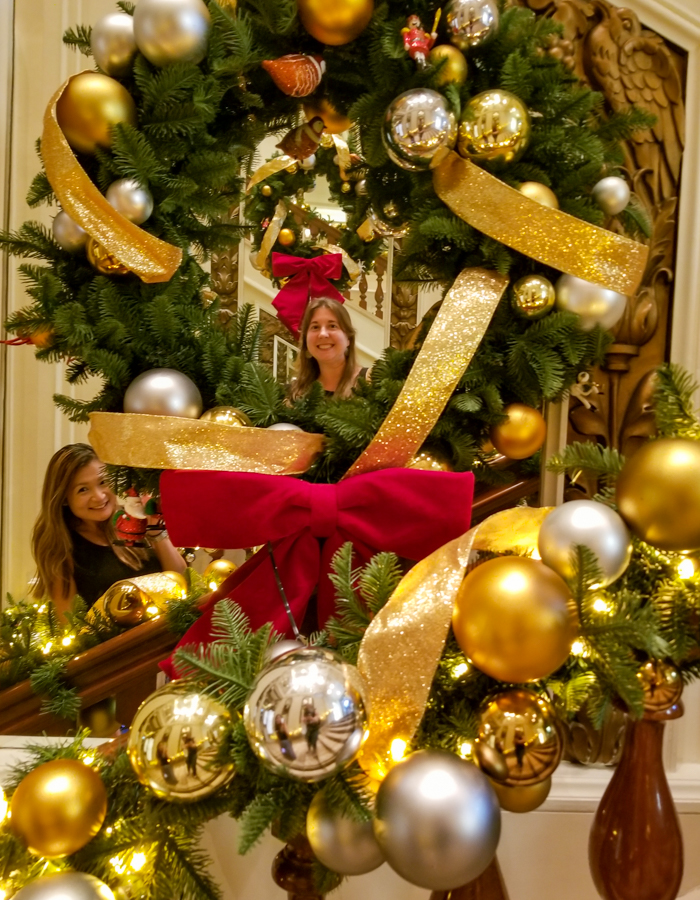 In my opinion, the best amenities were the large indoor pool and the sundeck. The indoor pool looks like a Roman bath and seems quite impressive. Several tables and chairs are situated inside around the pool and overlook a view of Victoria Harbour.

But the outdoor sundeck is where I wanted to be - this is where you go to work on your tan! 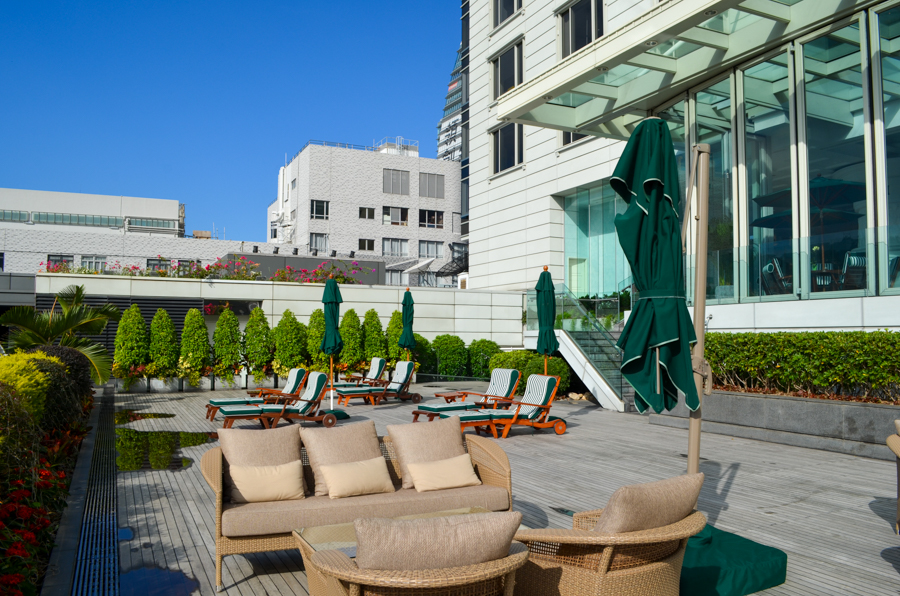 The sundeck at The Peninsula on Sunday morning

Because of COVID-19 restrictions, there were limits to the number of people that could use the pool at one time. Since it was a Saturday, the pool was crowded so we just hung out on the sundeck. After exploring The Peninsula for a bit, we decided to continue our walk and wander the Tsim Sha Tsui neighborhood. TST is known for its shopping and the Avenue of the Stars promenade along Victoria Harbour.

First we walked along the Avenue of the Stars to the K11 Musea - a brand new shopping mall/hotel complex. It reminds me a bit of Singapore with all the greenery on the building.

Next, we visited the 1881 Heritage - the former Marine Police Headquarters which was actually completed in 1884. Here, we gawked at the Christmas decorations with a hundred other people. However we did not queue for the chance to take a photo with the polar bears, unlike many others. Personally, I love the 1881 Heritage building for the architecture, but they always have an interesting art display in the courtyard as well.

After wandering for a bit, we returned to The Peninsula in time to watch the nightly Symphony of Lights show from the sundeck at 8:00 pm. This laser light show is a popular tourist attraction and has been running in Hong Kong since 2004.

As you watch it, the laser beams seem to dance with the music which is broadcast on the TST waterfront and in Wan Chai's Golden Bauhinia Square. Managed to capture one of the lasers! They were tough to photograph.

Although you cannot see the entire harbor or hear the music from The Peninsula's sundeck, you can see most of the lights and get a pretty good idea of the show. Plus, you can have a glass of wine while you watch!

At 9:00 pm, we headed down to dinner at Spring Moon - a Michelin-starred Cantonese restaurant on the first floor of The Peninsula. The restaurant is set in a space designed to remind you of a 1920's style Shanghainese mansion. The details throughout the restaurant are quite beautiful.

As part of the staycation package, we had a set dinner menu with lots of tasty dishes to try. I quite enjoyed the BBQ pork and the crab and dried fish maw soup. Unfortunately, since we'd eaten so much during afternoon tea, we weren't really hungry. But we did our best to appreciate this delicious meal!

Afterwards, we went back to relax in the room. During the turn down service, they gave us a yoga instructional guide. So I put that large open space in our room to use and attempted to do some yoga before going to bed.

Sunday Morning on the Sundeck

On Sunday, I woke up and headed up to the sundeck to take some daytime photos of the skyline. Unlike the night before when I was shivering and needed a sweater, it was HOT out there.

The location of the sundeck means it gets great sun throughout the day so it's the perfect spot to work on a tan. But they also have umbrellas in case you want a little shade. Breakfast in The Peninsula Lobby

For the final piece of the staycation puzzle, breakfast in the Lobby! We could choose between a Traditional Peninsula Breakfast (western-style) or a Chinese Breakfast. Both options looked delicious, but since I wasn't overly hungry, I opted for the traditional breakfast. Although I wouldn't say my omelet was anything special, the blueberry muffin (which I saved and took home) was delicious! Luckily, the breakfast also included bottomless coffee so I was happy.

Need to walk off breakfast? Here are 10 Gorgeous Hong Kong Hikes to consider!

Check Out of The Peninsula

After finishing up breakfast, I headed home on the MTR while my friend relaxed a bit more at the hotel. After eating so much, I was desperate to take a hike! Thank goodness it was a nice day and perfect for a walk up Mount Davis.

Whether you're searching for a staycation or visiting Hong Kong and are looking for luxury, I'd recommend this hotel. Check out rates and reviews for The Peninsula Hong Kong on Booking.com.

Despite the fact that this staycation was roughly twice the price of my last staycation, I think it was worth it. For this one, an additional meal was included in the staycation package plus the amenities were open.

Since The Peninsula is a Hong Kong landmark, being able to stay there felt really special. It certainly felt like a once-in-a-lifetime experience!

What luxury hotel would you like to stay in for a night if you had the chance? 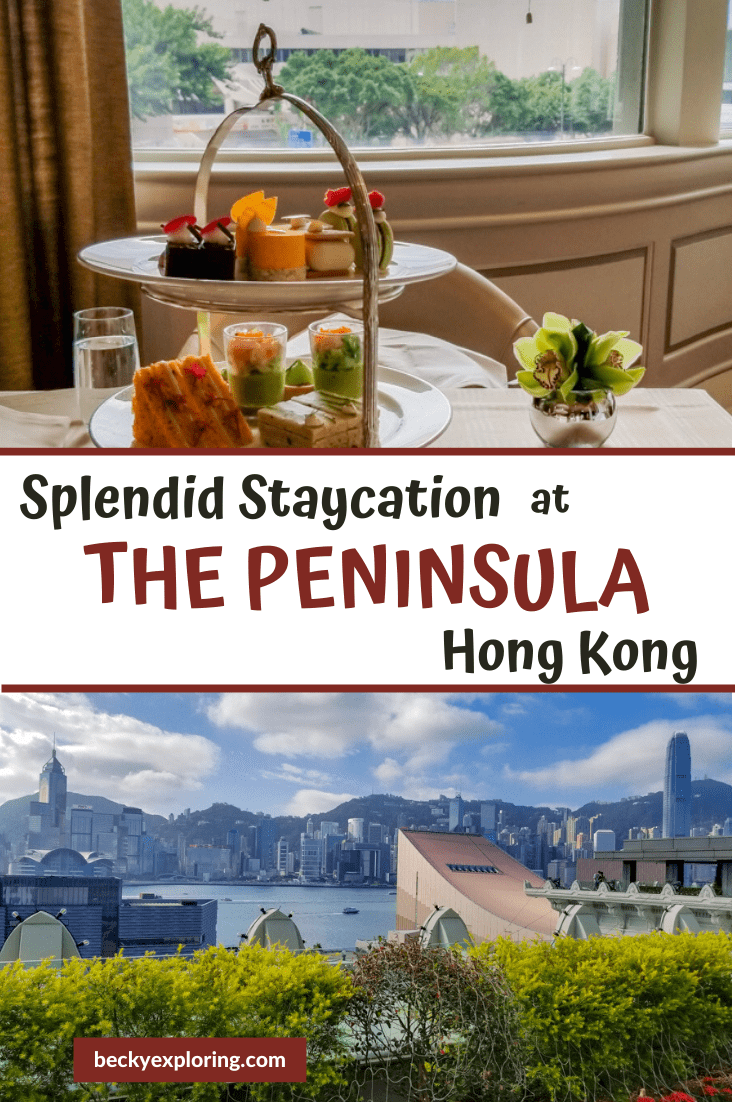 An Easy, Dog-Friendly Hike on the Fung Hang Family Walk