If you're looking for a great workout in nature with stunning views, hiking the Twins in Hong Kong is the way to go. The Wilson Trail Sec.1 from Wong Nai Chung Reservoir to Stanley takes you up not one but three peaks - Violet Hill plus Twin 1 & Twin 2. In this hiking guide, I'll show you the route that I used to hike the Twins with some tips to help you prepare.

Preparing for the Twins Hike

Because the hills on Hong Kong Island have trails running all over them, you'll find there are multiple ways to get to most destinations. Jeremy and I chose to start our hike to the Twins at Wong Nai Chung Reservoir Park.

The total hike from Wong Nai Chung Reservoir Park to Stanley Gap Road is ~5 km / ~3 mi. Since you'll be hiking up several peaks and stopping for photos, allow roughly 2-3 hours to complete the hike.

Although Jeremy and I only hiked one way, if you're feeling ambitious, you could make this hike a loop by using a different trail to return back to Wong Nai Chung Reservoir.

Who Should Hike the Twins?

Since the hike from Wong Nai Chung to Stanley includes three peaks, it's more strenuous than some on Hong Kong Island. About mid-way through the hike, you'll descend several hundred meters, only to go straight back up.

At times, the trail is steep staircases, most without railings or anything to hold on to. At other points, it's a rocky dirt path that requires a bit of scrambling and careful footing. 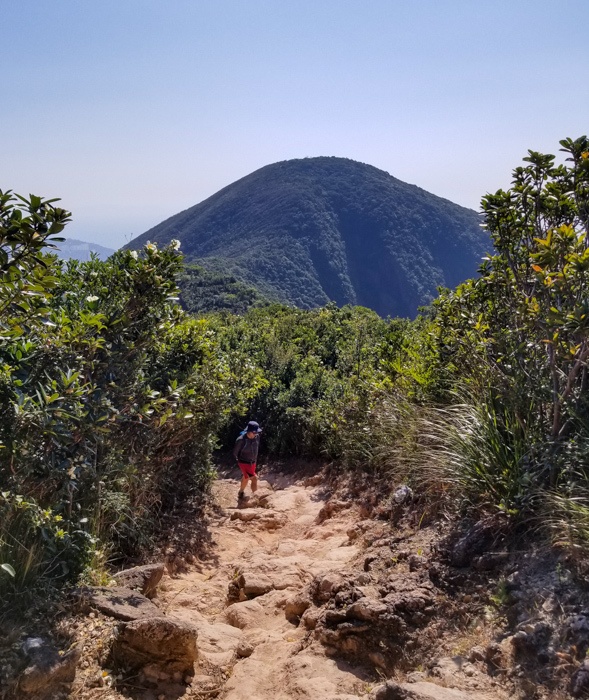 Tip:  Wear sneakers with good traction and grip! The rocky sections of this trail are slippery so wear correct hiking footwear for this hike.

Although I believe that most people could complete this hike, I recommend it for at least intermediate-level hikers. It would also be suitable for beginners seeking a challenge.

When to Hike the Twins?

We hiked the Twins in December - a great month for hiking in Hong Kong! It's much cooler and less humid than summer plus the air quality is still relatively good. Because it's a strenuous hike with little shade at times, I'd recommend it for a fall or winter hike versus summer.

During our hike, I noticed there seemed to be fewer crowds on this trail than many we've done. I think this could be because it's one of the more difficult hikes on Hong Kong Island. As a result, an early start may not be necessary, though might ensure you have the trail more to yourself.

For an easier hike that still has gorgeous views, try Dragon's Back to Big Wave Bay!​​

Items for Your Hike

You probably have your own list of things to bring when you go hiking, but here are a few of my recommendations for this particular hike.

Getting to Trailhead at Wong Nai Chung Reservoir Park

Since Wong Nai Chung Reservoir Park is on one of the main bus routes from the north to the south side of HK Island, it's easy to get there by public transportation.

Though a few buses stop at the reservoir, I think the easiest way to get there is to catch the number 6 bus. This bus begins in Exchange Square in Central and runs through Admiralty then on Queen's Rd East in Wan Chai - plenty of convenient places to catch it. Use the Citybus-NWFB app to find stop information.

For more bus info, check out this Guide to Using Public Transportation in Hong Kong!

If you'd rather take a taxi, but aren't sure how to tell the driver where to go, I recommend showing them a Google Map of your destination. This worked well for us.

Since Jeremy had an evening flight the day that we hiked the Twins, we wanted to get started as quickly as possible so we took a taxi. A taxi from Kennedy Town to Wong Nai Chung Reservoir Park cost ~HK $100 (~US $13), cash only. It would be cheaper if you caught it in Central or Wan Chai.

Overview of the Twins Hike

As you can see, the total hike from Wong Nai Chung Reservoir Park to Stanley Gap Road is ~5 km / ~3 mi.

Although Google Maps shows this hike taking under 2 hours, this seems unlikely. Since you'll be hiking up several peaks and stopping for photos, I'd allow roughly 2-3 hours to complete the hike. It took us 2.5 hours for the hiking portion, plus ~20 minutes to get into Stanley. 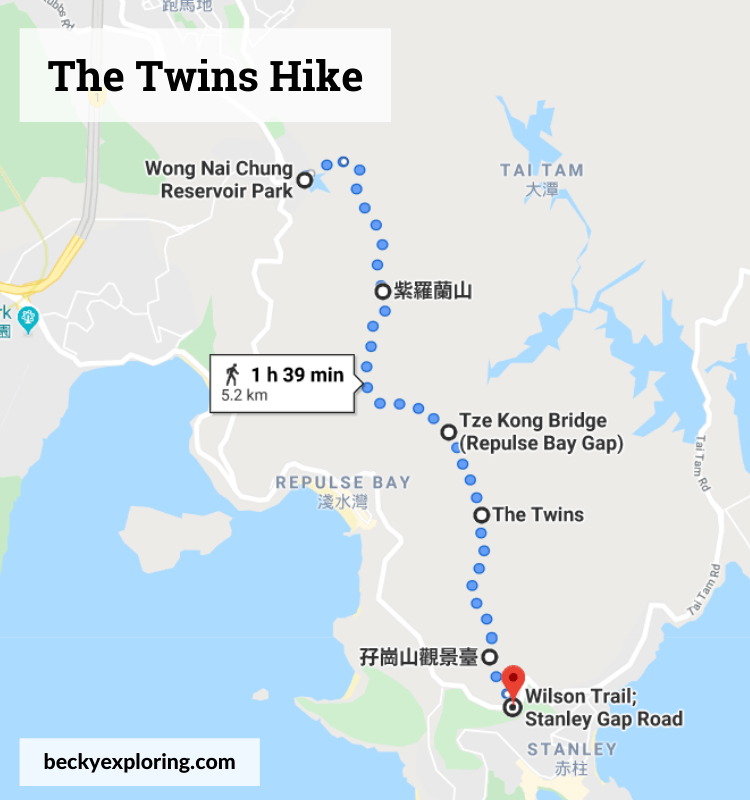 Built in 1889, the Wong Nai Chung Reservoir was the third reservoir in Hong Kong. It was converted into a park and opened to the public in 1986 and has several hiking trails around it.

Toilet Tip:  If you need to use the toilet before your hike, the public restrooms at the park are your chance! I didn't see any toilets along the trail.

From the Wong Nai Chung Reservoir, continue up the road until you reach the Wilson Trail - Stanley Section. It's a steep, but short climb to the trailhead.

When you see a set of stairs plus a park map on the right side of the road - that's your starting point. 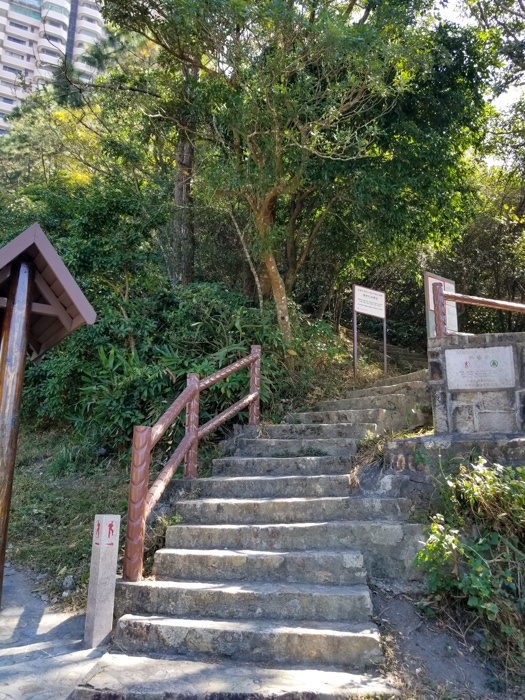 Tip:  If you come via taxi, you may want to have the driver drop you off further up the road at the trailhead instead of at the reservoir. 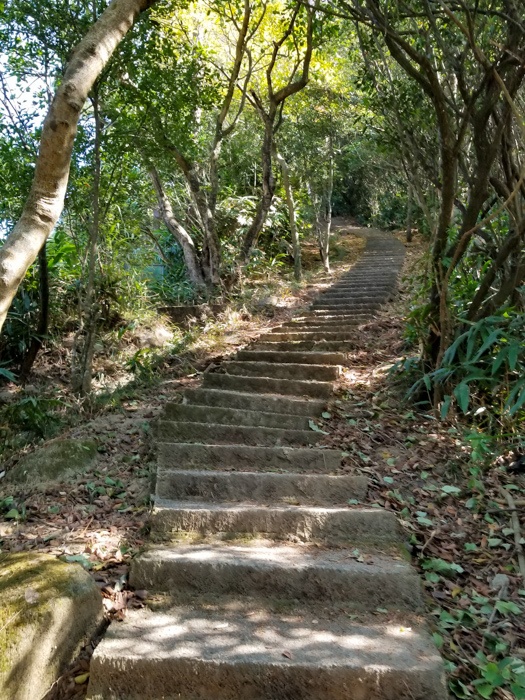 In late-January through February, the hill is covered in violet flowers - Hong Kong Iris. Since we were hiking in December, we missed seeing the iris, but found lots of pretty yellow and white flowers lining the trail.

As you climb, don't forget to turn around as views of the city appear behind you! 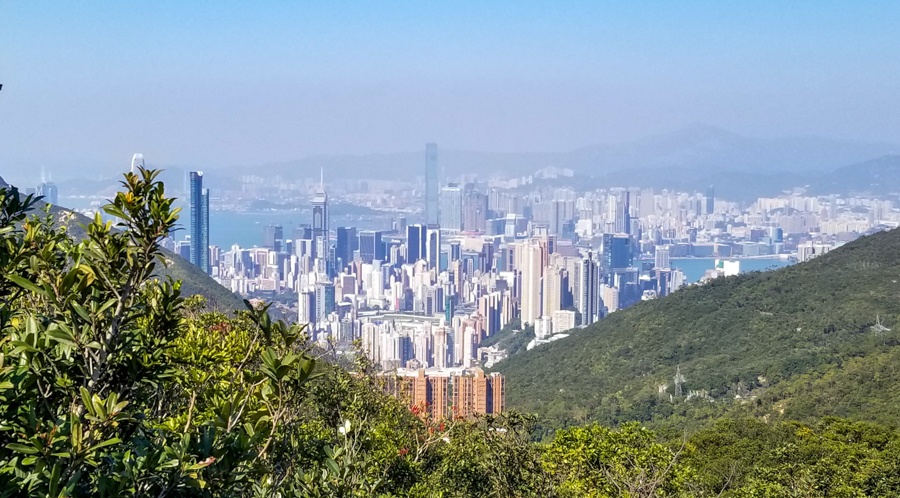 Cresting the hill, you'll begin to see beautiful views of the Tai Tam Reservoir and Tai Tam Harbour off to your left. If you look closely, you'll probably see some huge yachts sitting in the harbour!

As I gaze out over the green, forest-covered hills when hiking, it always amazes me that all this natural beauty exists so close to such a dense urban area. 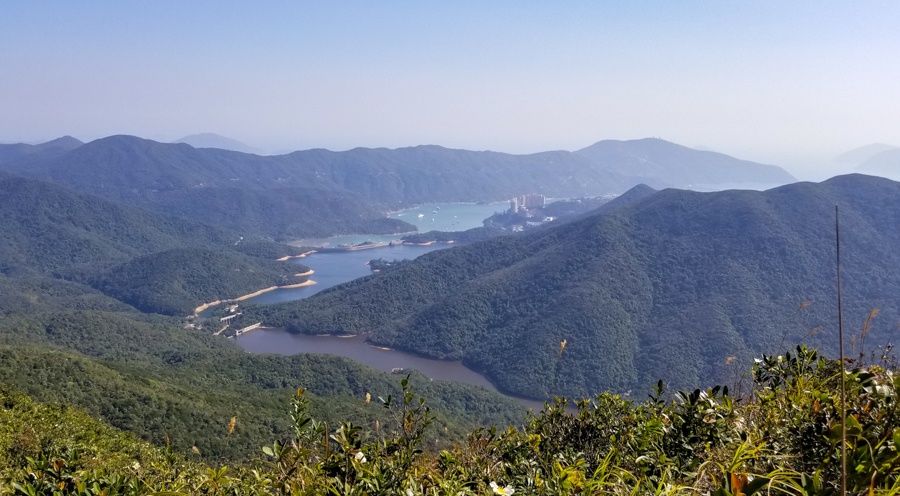 After you reach the peak of Violet Hill, you'll begin heading downhill as views of Repulse Bay appear in front of you.

Over the next 1.5 km (~1 mi), you'll descend ~300 m. You'll work your way down several steep staircases on the side of the mountain. Luckily the staircases are well-maintained since you won't find anything to hold on to.

This section of the trail is very exposed to the sun so I wouldn't want to hike up it! Especially not in summer! 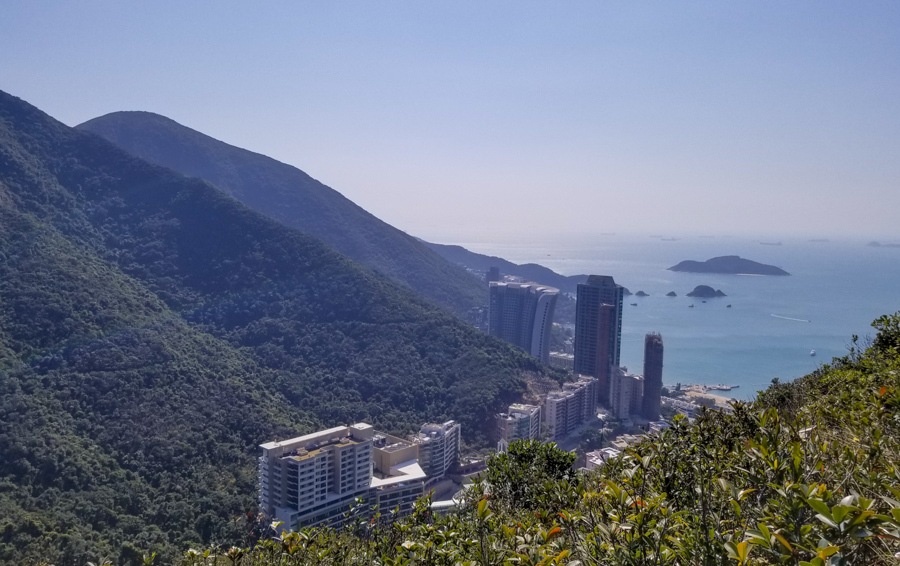 After reaching the Tze Kong Bridge in Repulse Bay Gap, I recommend taking a short break. Eat some snacks, hydrate, and prepare for the steepest part of the climb!

Want to explore another island? Try the hike from Mui Wo to Pui O Beach on Lantau!

I think you'll agree that hiking up to the Twin Peaks is by far the most difficult portion of this trail! Although a short climb distance-wise, the steep steps are more like a step machine workout than a hike! 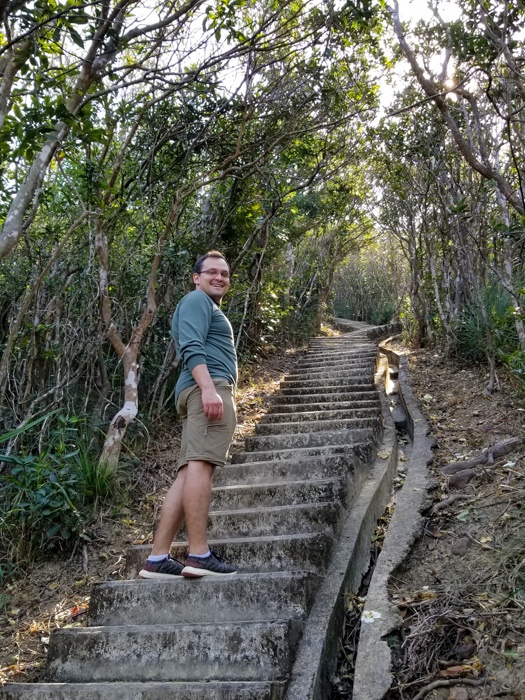 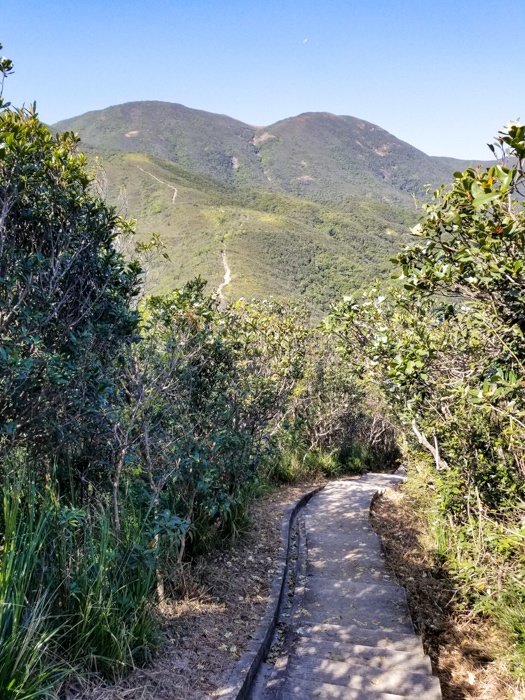 At the top of the peaks themselves, you can't see much but the bushes and trees surrounding you. But as you round the corner, the views begin to emerge and you realize it was worth all the effort to get there!

By far the best views of this hike are in the section after the second Twin Peak heading down towards Stanley. On a clear day, you can see a bunch of green islands dotting that blue, shimmering sea. Plus, you'll have a spectacular view of Stanley village, its beaches and the peninsula. 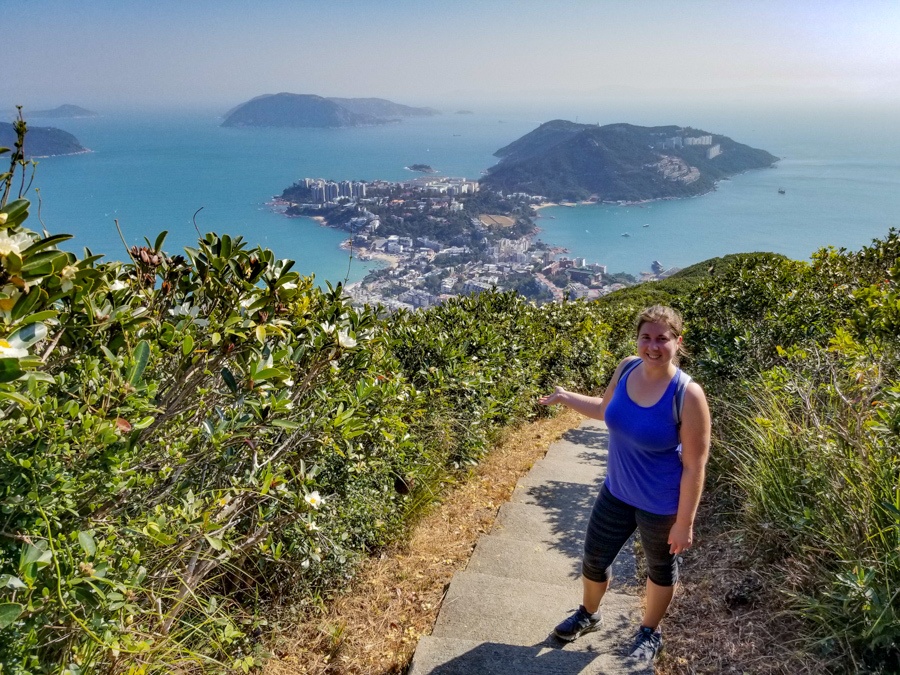 As you keep walking, the view points get even better so don't make the same mistake I did by taking so many photos at the top!

Pro Tip:  About 450 m before you finish the hike, you'll come to a view point with a sign pointing out key landmarks. If you don't have time to do the entire hike, but want those incredible views, you could just hike up to this view point from Stanley Gap Road. From atop this hill would also be a fantastic place to watch the sunset. 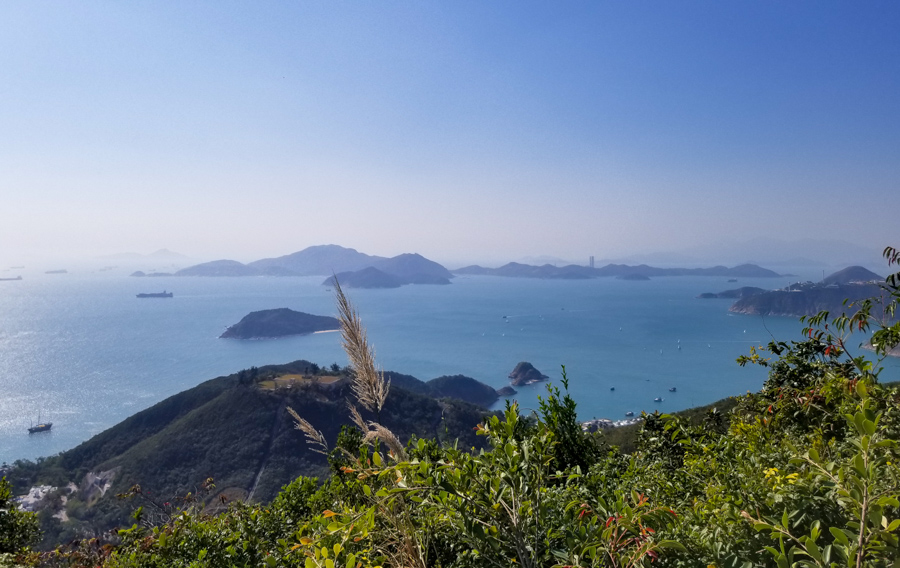 Because this section of the trail has the best views, I think the direction we hiked the trail is the best way to do it. If you start in Stanley and hike towards Wong Nai Chung, you end up having to turn around frequently or else miss the stunning views!

After you've climbed down what feels like a million steps (probably ~1,000 steps), you'll reach Stanley Gap Road. From here, it's difficult to reach Stanley town on foot, so just hop on the bus. 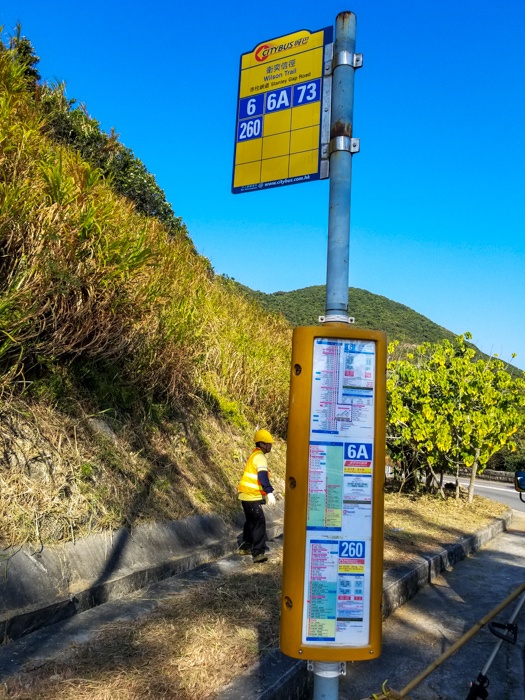 The stop on the same side of the road as trail is where you'll catch the number 6 bus to Stanley. If you prefer to head straight back to Central or Wan Chai, cross the street and take that number 6 bus.

This ends the Twins hike from Wong Nai Chung Reservoir to Stanley!

For a beach hike with incredible views, check out Hiking to Ham Tin Beach in Sai Kung!

After hiking the Twins, you'll be very close to Stanley village. Known for its laid-back vibe, local market and beach activities, Stanley a great place to relax after a grueling hike! If you have time, I recommend you make a stop there.

Although Stanley is known for its local market selling a range of goods, such as artwork, clothes, and souvenirs, on weekends in December, you can also visit a Christmas Market! So Jeremy and I hopped on the bus after our hike to check it out.

Each year, Stanley Plaza hosts the Christmas Market, but changes it up with a different theme. This year's "Happy Chemistry" theme wasn't the most Christmasy one we've seen, but it was interesting nonetheless. 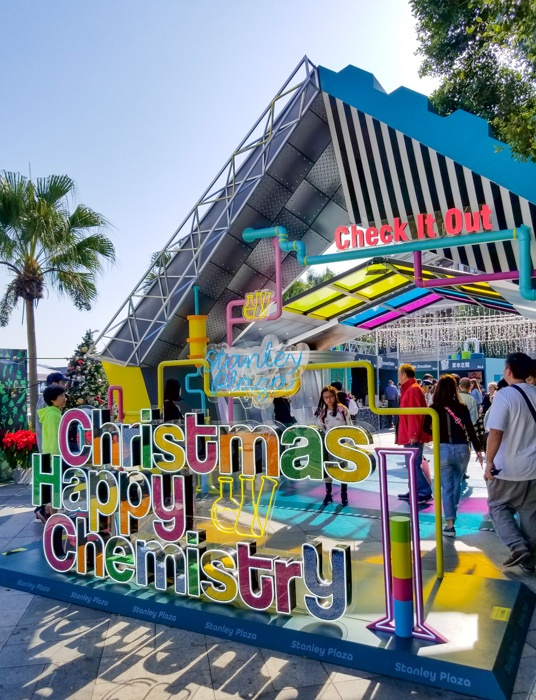 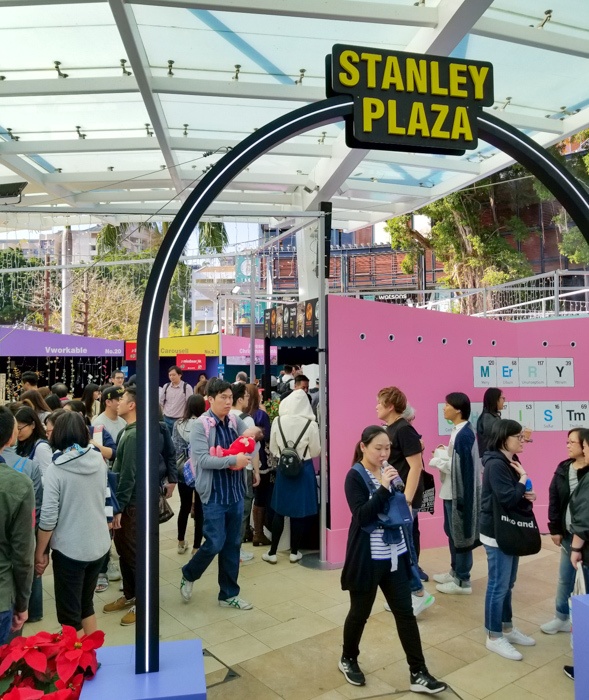 We wandered through the booths selling food, art & crafts, liquor, and random other things to entice market-goers to purchase holiday gifts. They even had a little Instagram "playground" set up for photos. Since we'd just finished a hike, I was even less photo-ready than I am normally!

After an exhausting workout, nothing hits the spot better than a carb-heavy meal like mac 'n cheese! The mac 'n cheese at Pickled Pelican has pancetta, mushrooms and other veggies loaded into the pasta which makes it a hearty meal. I always have leftovers which makes it even better! 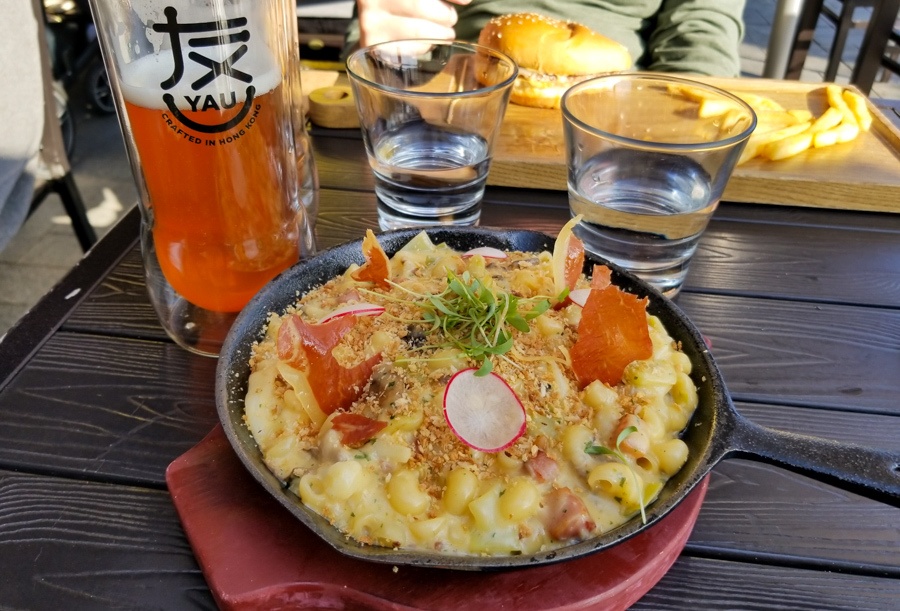 Find more hikes in Hong Kong and abroad on the Hiking Guides page!

The Twins hike is a beautiful way to get a great workout in Hong Kong! I hope you'll give it a try and let me know what you think! 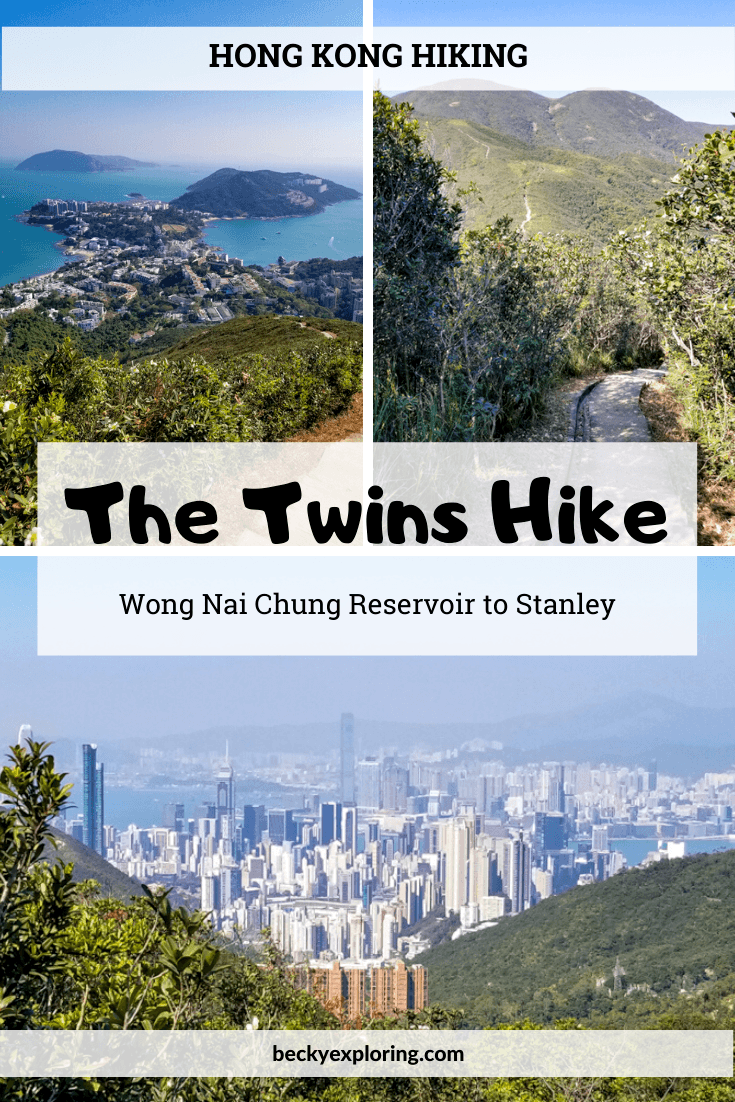 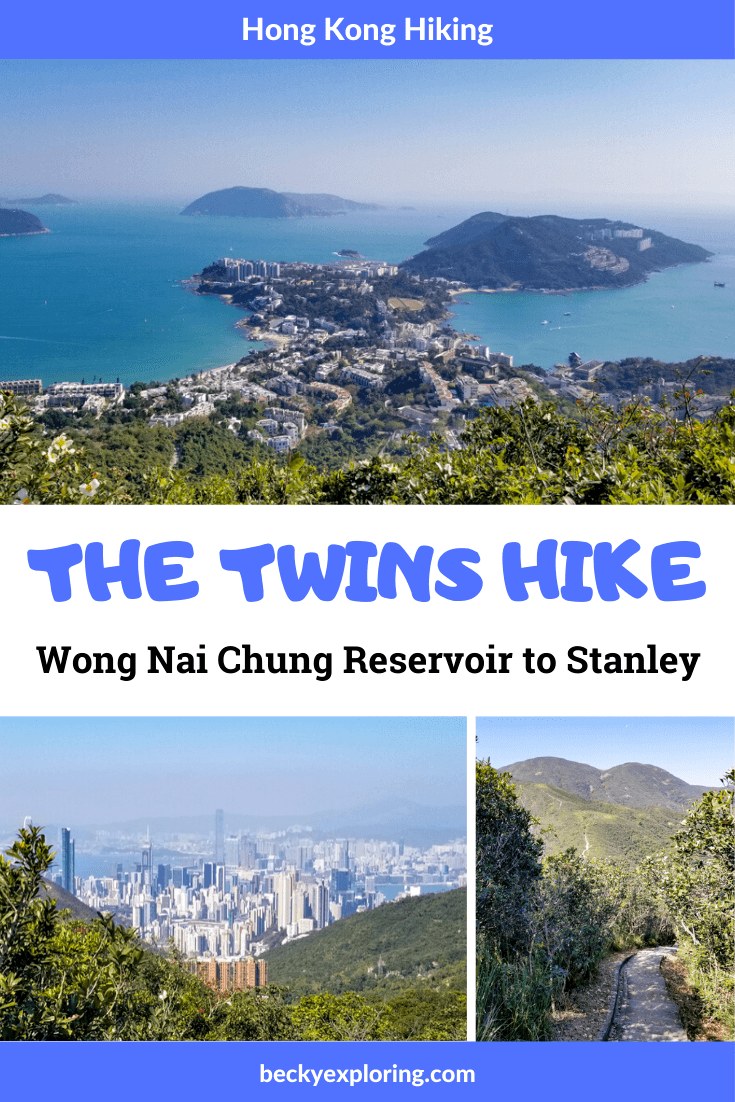 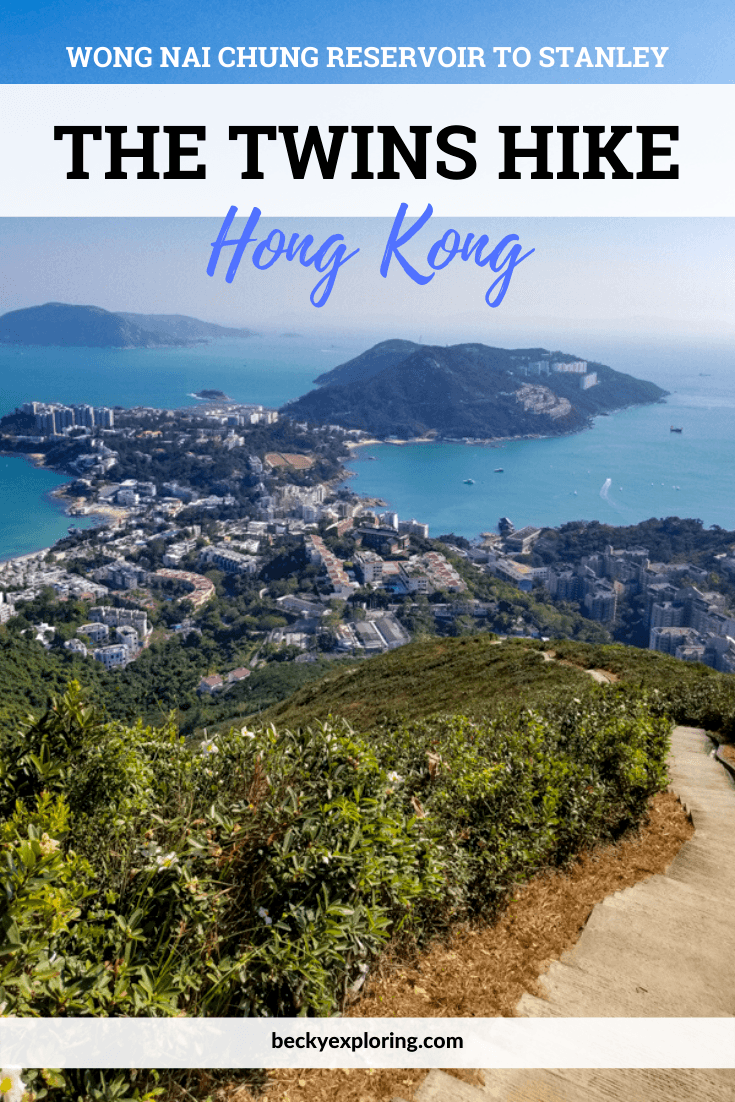