When to Visit Kuang Si Waterfall

To see Kuang Si Waterfall at its best, visit during dry season (December - April) and on a sunny day. By December, the water has settled and the pools take on a soft blue hue. Even better - the color of the pools intensifies though in the sunlight.

When my parents visited last December, I took them to Kuang Si Waterfall. When we arrived at the falls, the sky was somewhat cloudy and the water was pretty. But, as the sun started peeking through the clouds, the pools turned an enchanting turquoise!

No matter which season you visit Laos, you should make a trip to Kuang Si Waterfall. And, depending on when you go, it looks like a completely different waterfall! My first visit to the falls was in July (2011) - towards the start of rainy season.

Though the falls do not have the same blue color as during dry season, they are much fuller and powerful. So, I think in rainy season, the falls are impressive for different reasons. However, if you visit the falls after several days of heavy rain, the trails may be so muddy they're almost impassable. The terraces of tranquil pools may also resemble rapids instead. 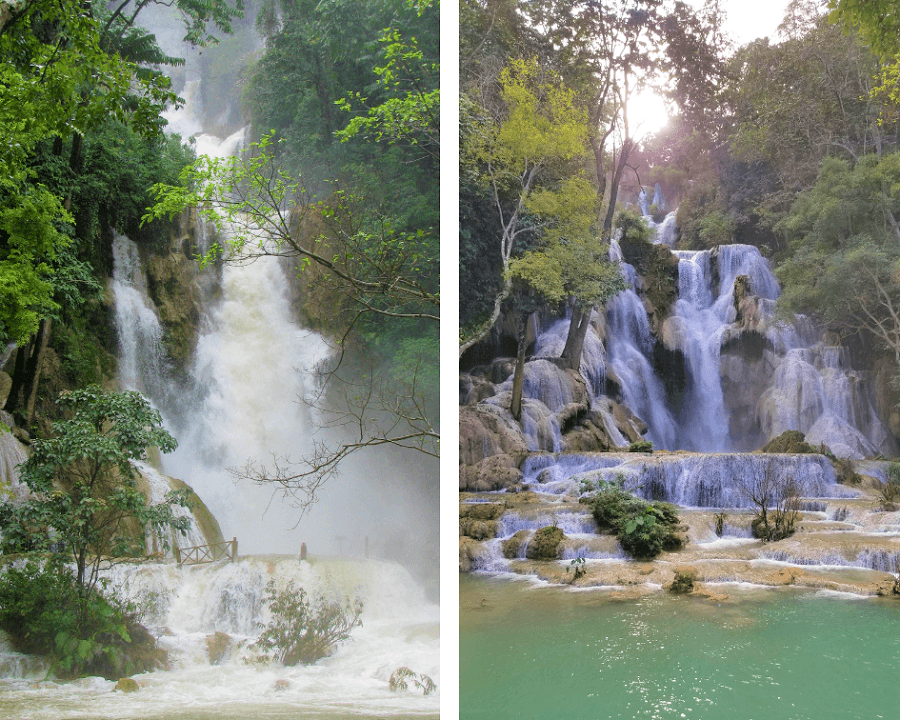 How to Get to Kuang Si Waterfall

Only a ~45-minute drive (by car) from the historic center of Luang Prabang, the falls are easily accessible. Numerous modes of transportation are available to get you to the falls, including: 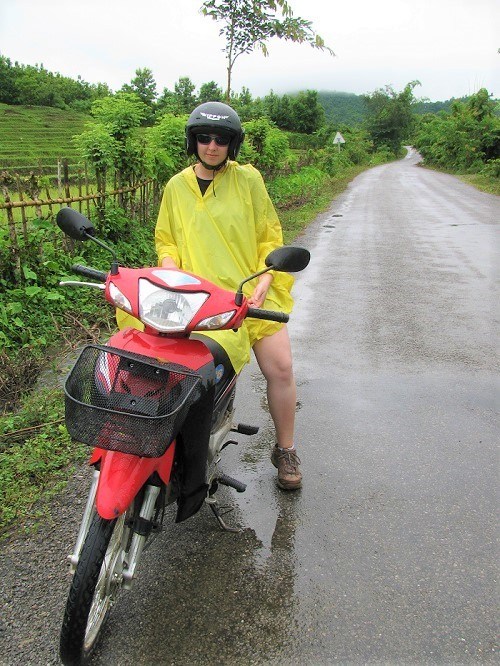 Heading out to Kuang Si in July... the poncho was a must!

If you're looking to avoid the crowds, you should plan to arrive early in the morning (before 10am). This way you'll beat the tour groups and hordes of others that flock to the falls in the afternoon. During dry season, Luang Prabang draws in lots of tourists and Kuang Si Waterfall is a top attraction.

I was surprised by how many people were at the waterfall when we went last December. We waited until the afternoon to visit though because it was a cloudy morning. Since we wanted to see the falls in the sunlight, we waited until it had (mostly) cleared after lunch to head to Kuang Si Waterfall. 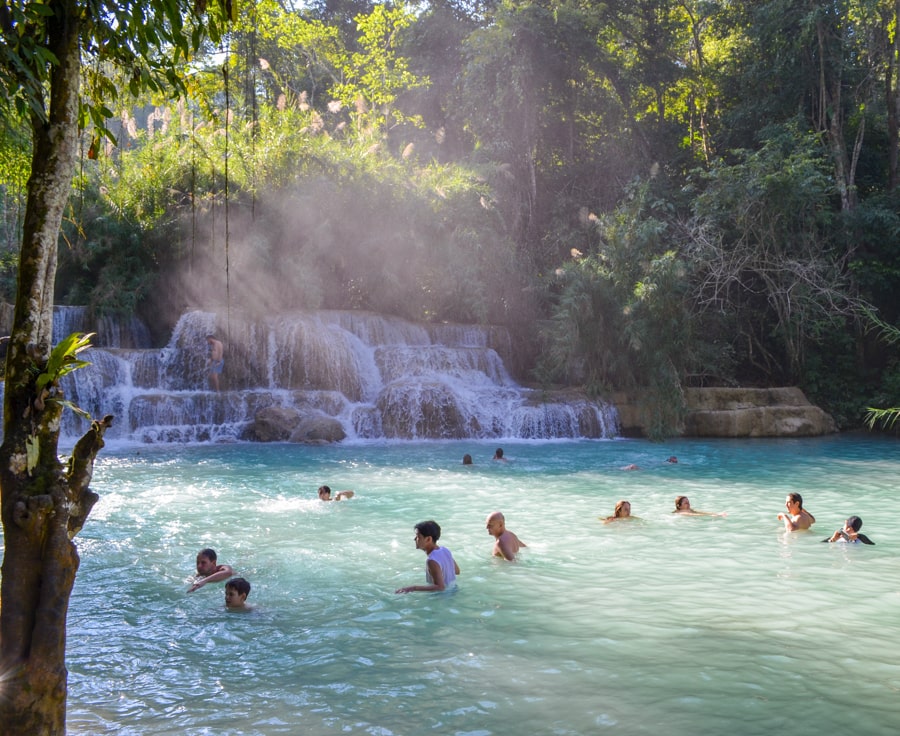 Lots of people swimming at the falls

During rainy season, the falls are practically empty so we had the place to ourselves - even in the afternoon.

When you arrive, you'll park in a lot near the entrance. Near the parking area, you'll come up to several little restaurants and street food vendors. You'll also find shops selling flip flops, bathing suits, and an array of other items.

Toilet Tip: At the entrance, you'll find public toilets. They're pretty rough and the ones inside the park are (slightly) better. At both, the toilets are squat and the amenities are non-existent. So come prepared with toilet paper and hand sanitizer!

As you begin to walk through the park, you'll come to... bear enclosures...? Yes, that's right! Although initially it looks like a small zoo - it's not. It is a bear rescue center and part of an overall wildlife conservation effort run by Free the Bears.

In parts of Asia, Asiatic black bears, or moon bears, are prized for their bile which is used in medicine. As a result, bears are caged and are essentially "milked" for their bile. The bears at the center were rescued from such horrifying conditions or similar. By donating or buying one of the t-shirts at the center, you can support these rescue efforts. 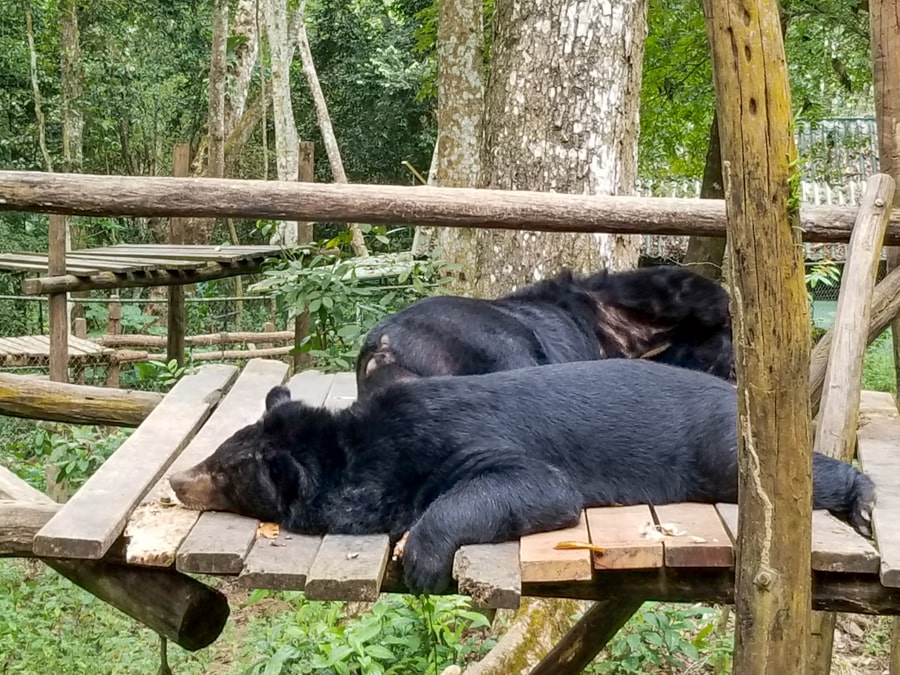 And, on a lighter note, the bears are really fun to watch as they play with one another!

Are you interested in wildlife conservation? Consider a trip to Sepilok in Borneo, Malaysia!

As the first cascades of the lower Kuang Si falls come into view, you'll begin to see what all the hype is about. Tranquil aquamarine pools surrounded by lush greenery - what could be better? 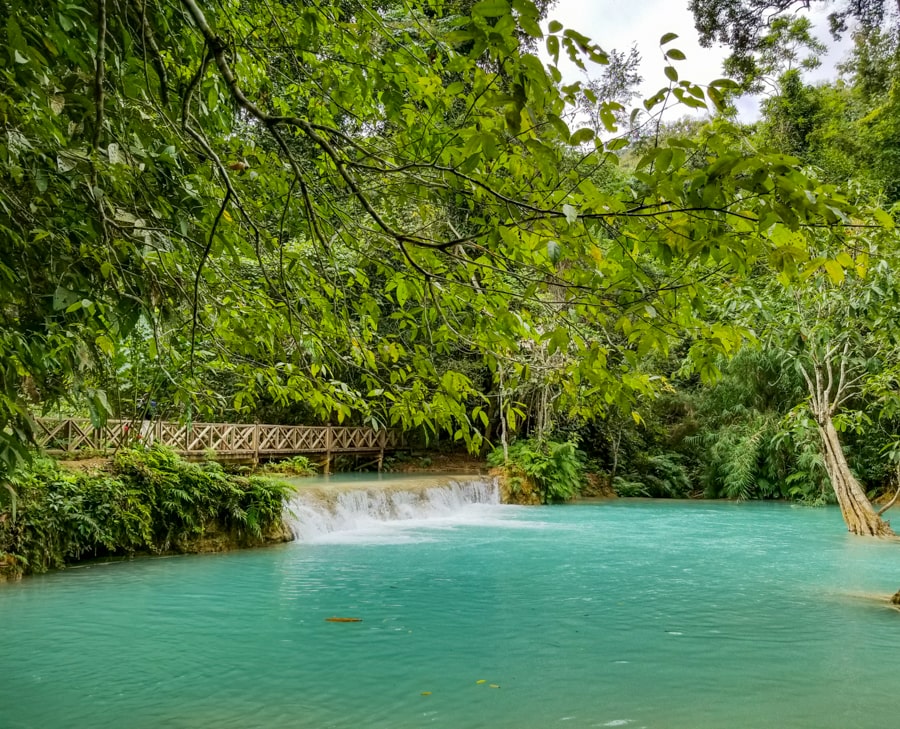 At this point, you can stop for a picnic, swim around the pools a bit. In July 2011, there was a rope tied to one of the trees to swing into the pool. In December, we saw signs cautioning visitors not to jump in. I noticed how much higher the water levels are during rainy season, so presumably the water is too shallow to jump in dry season. 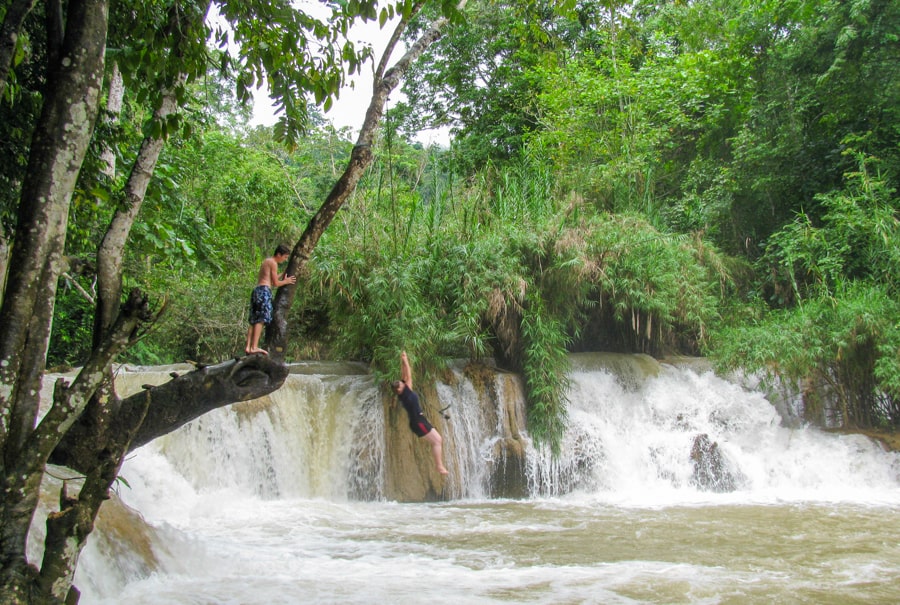 Swinging into the falls in July - clearly I forgot my swimsuit! 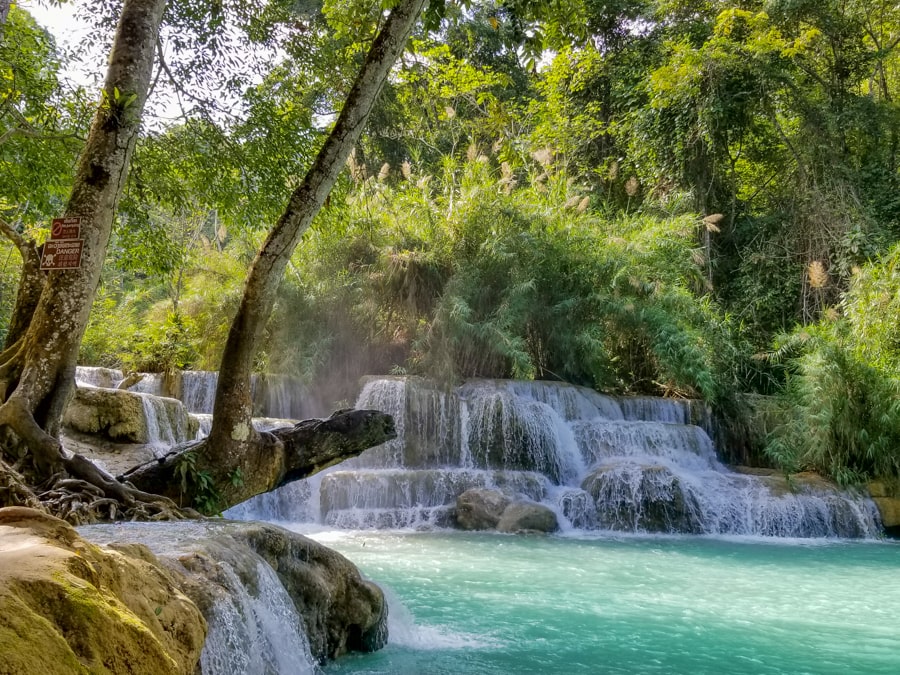 Same location as above, but no swing in December... also looks like part of the stump is gone!

Pro Tip:  If you plan to swim at the falls, bring a swimsuit and change at the falls. They have changing rooms near the falls (separate from the toilets, thankfully!). Be prepared to change back into your clothes before you leave the falls. Laos is fairly conservative and it's not appropriate to wear your swimwear around in public.

Once you're done at the lower pools, continue up the trail along the falls. More spectacular falls are yet to come!

As you climb up the trail, be careful as the mud on the trail gets very slippery - especially when it's wet! During rainy season, it's especially hazardous. It's a good idea to wear sneakers or some other sturdy footwear instead of just sandals.

TRUE STORY: My mother-in-law slipped on the mud and broke her wrist here in July 2011. She had to go all the way to Bangkok before she could get her wrist properly set! (Lao hospitals = not great!)

As you climb, you'll come across several tiers of stunning and enchanted-looking pools and cascades. 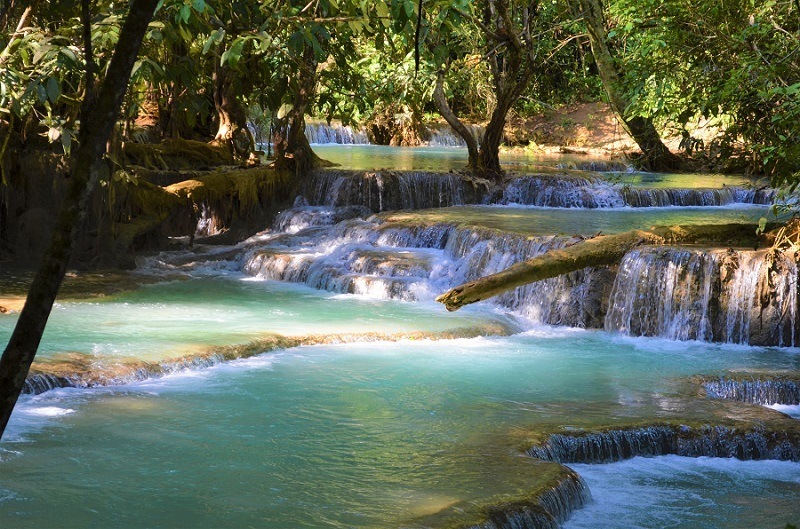 As you reach the top, you'll see the stunning finale! The largest set of falls plunge down 60 m (200 ft) into yet another gorgeous pool. In dry season, you can walk up on the boardwalks close to the falls.

In rainy season, the falls plunge down with such power that the bamboo boardwalks set up during dry season often get washed away. The spray from the falls soaks the entire area (and you)!

You can see how powerful the falls are - the railing of the bamboo boardwalk you see below it is where I'm standing to take pictures in December!

Though I've heard about others hiking to the top of Kuang Si Waterfall, we saw signs posted when we were there that discouraged it. Generally, I'll abide by official warnings as they tend to be posted for safety reasons (and again, Lao hospitals are terrible). So we didn't hike to the top.  If the trail is open when you visit - go for it! I hear the views are epic!

I'll leave you with a few tips of things you should bring with you to Kuang Si Waterfall:

1) Swimsuit, towel, and dry clothes -  wearing your swimsuit by itself, isn't appropriate. So, make sure you have a dry change of clothes.

2) Proper footwear - you don't want to slip walking on the trails! Bring sneakers or sturdy sandals.

3) Water & snacks - it's a ~45-minute drive to the falls from Luang Prabang, you might need to munch on something!

4) Small amounts of cash for the entrance fee, and/or buying extra snacks or water.

6) Mosquito repellent, especially during rainy season when dengue fever is a bigger risk.

7) Sunscreen - even though it's shady, if you're out in one of the pools swimming, you're going to get the rays.

When planning your trip to Kuang Si Waterfall in Laos, you may also find the following articles helpful:

Kuang Si Waterfall is a magnificent natural beauty just outside of Luang Prabang that you should be sure to add to your itinerary.

Have you been to Kuang Si Waterfall? Let me know what you thought in the comments below! 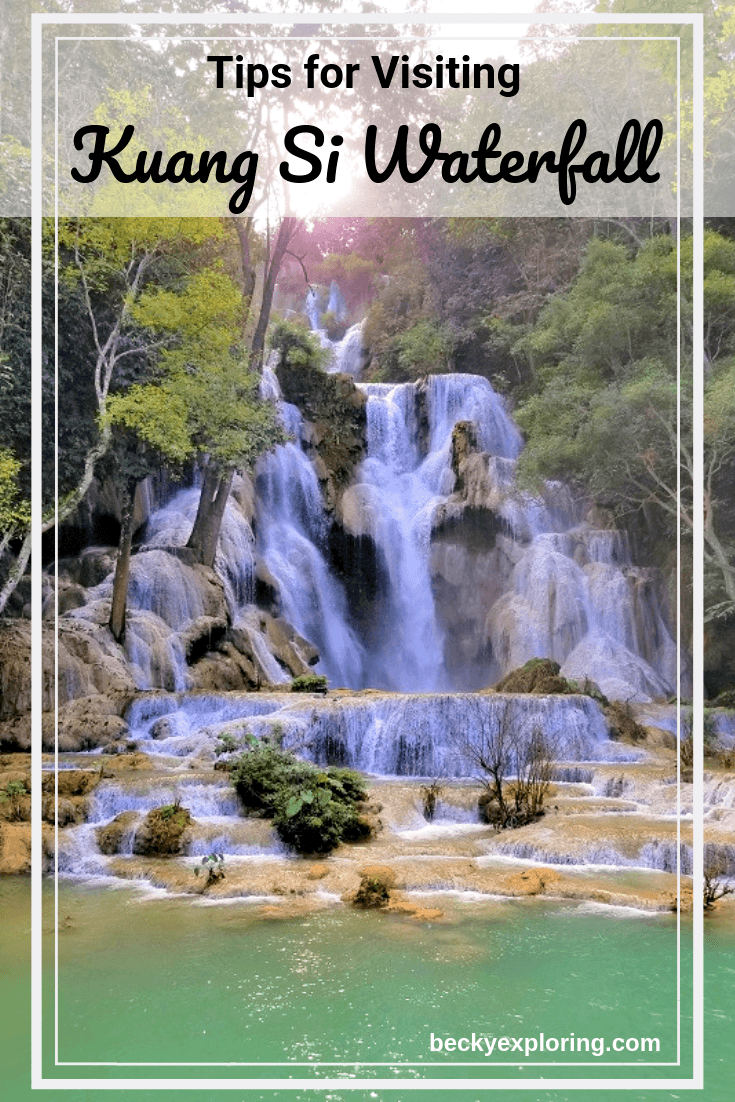 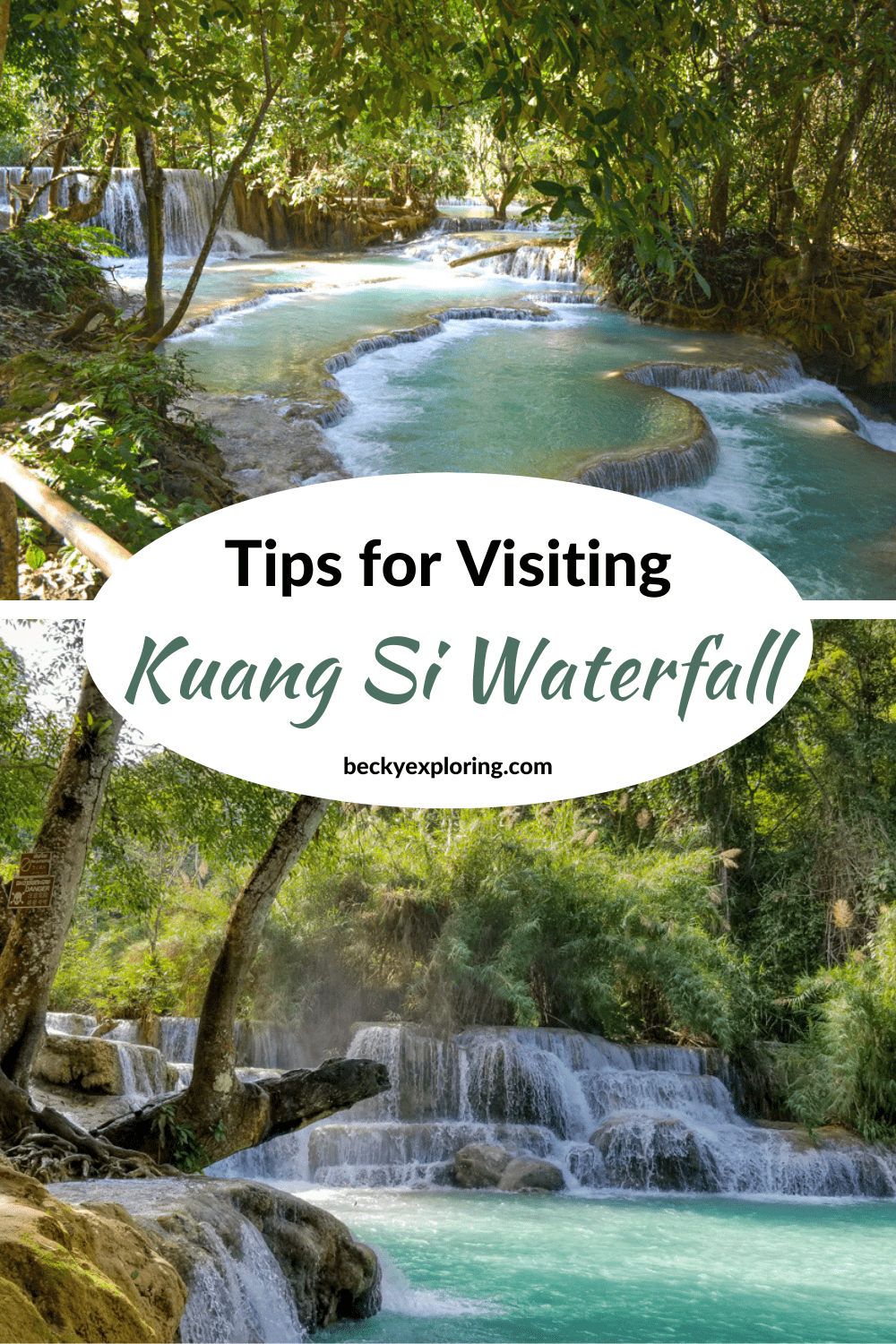 What to Expect on a Mekong River Cruise in Laos

How to Travel Cheaply from Chiang Rai to Houayxay, Laos

Read More
How to Travel Cheaply from Chiang Rai to Houayxay, Laos