President Theodore Roosevelt once remarked that the Pennsylvania State Capitol was the "handsomest building [he] ever saw". As you drive into Harrisburg and catch site of the gleaming gilded bronze dome, you'll be intrigued. However, once you enter this opulently-designed capitol for the free tour, you'll quickly realize why the president made such a claim. Let me show you why PA's beautiful capitol is a must-see building on your next East Coast road trip!

This post contains affiliate links which means I receive a small commission if you purchase something using the links. This won’t cost you anything extra but helps keep this blog going. Thank you for your support!

Where is Harrisburg, PA?

Although many people incorrectly think of Philadelphia as the capital of Pennsylvania, it is not. Instead, Harrisburg, a small city a couple hours west of Philly in Central Pennsylvania, holds that distinction.

Situated along the Susquehanna River, Harrisburg feels to me more like a charming small town than a capital city. Over the past several years, the downtown core has been revitalized and is home to several good restaurants, a Central Market, plus the Pennsylvania State Capitol.

Where to Stay near the PA State Capitol

If you're staying in Harrisburg for a couple nights, I highly recommend staying in downtown close to the State Capitol Building. It's a vibrant section of town near many restaurants and bars, coffee shops, historic buildings, plus a scenic river trail.

Use the map below to start your search for fantastic accommodations in Harrisburg, PA.

Before You Visit the Pennsylvania State Capitol

As you plan your trip to Harrisburg, here are a few things to keep in mind to help you decide the best time for you to visit the Pennsylvania State Capitol Building. 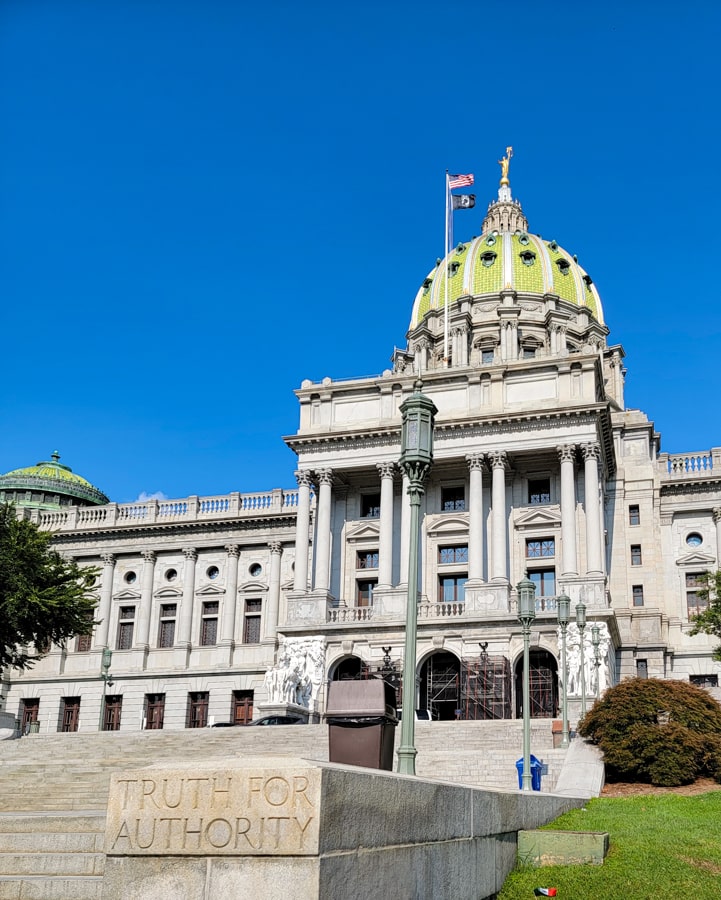 On regular weekdays, the PA State Capitol Building is open to the public from 8:30 am - 4:30 pm. During this time, they offer guided tours every 30 minutes. Alternatively, you can wander around the Capitol at your leisure following the self-guided tour.

Since we preferred a self-guided tour, I'm glad we visited the capitol on a weekday afternoon. On the day we visited, however, we only saw a few people on the guided tours. If we'd chosen that option, we would've been in a small group.

If you're planning to take a self-guided tour, be sure to download the Pennsylvania Capitol App before your visit. It's easy to use and includes most of the information provided on the guided tour. 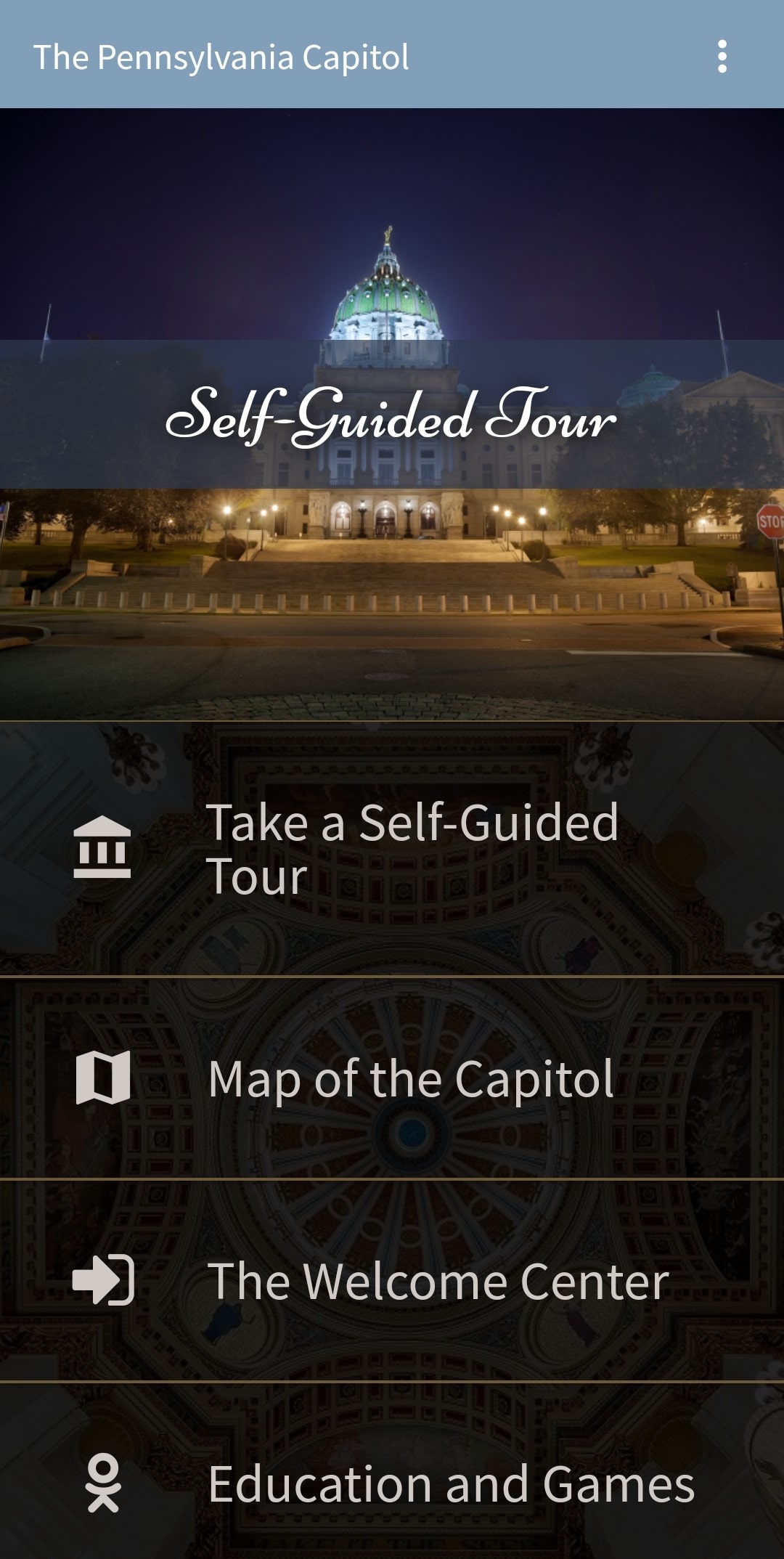 Pro Tip: The Supreme Court is only accessible on the guided tour so even though you can read about it on the app, you cannot actually go inside on your own.

On weekends and holidays, you must join a guided tour in order to tour the State Capitol. Weekend tours are only offered a few times per day (9 am, 11 am, 1 pm, 3 pm) and are capped at 40 people per tour.

In order to secure a spot, you should consider booking your free guided tour of the PA State Capitol online in advance.

Is the PA General Assembly in Session?

If you'd like to see a session of the General Assembly during your visit, then be sure to check whether they will be in session. You can check their schedule on the PA General Assembly website.

While you are allowed to watch a session from the public viewing areas above the chambers, you are not allowed to take photos while the Legislature is in session.

As you'll see, I took many photos, which meant the General Assembly was not in session during our visit.

About the Pennsylvania State Capitol

Designed by architect Joseph Miller Huston, the Pennsylvania State Capitol cost 13 million (US) dollars to build and was finished on October 4, 1906. Designed in the American Renaissance style, Huston envisioned the Capitol to be a "palace of the arts". As such, he commissioned the finest artists to create beautiful murals, stained-glass windows, and other fine pieces which adorn the Capitol.

Today, this state capitol building is the functional seat of government, in which laws are passed, for the state of Pennsylvania.

Once you've arrived in Harrisburg, head towards the Pennsylvania State Capitol Building at the intersection of Third and State Streets* to start your free tour.

*Although on weekdays, visitors can enter the capitol through several entrances, on weekends this is the only entrance open. 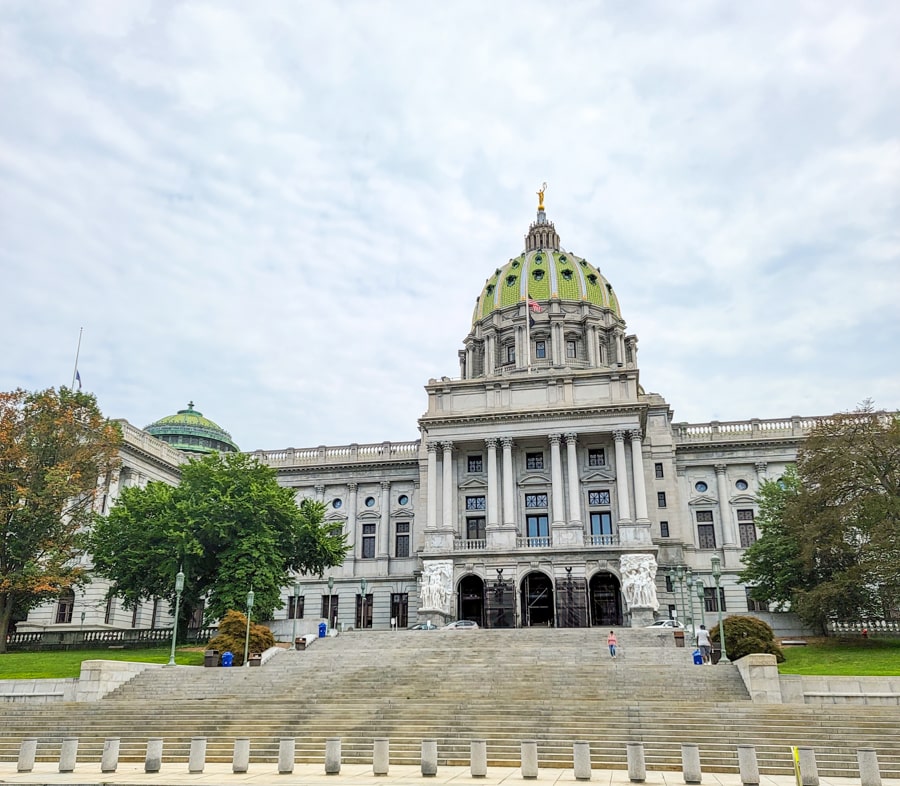 Parking Tips: In downtown Harrisburg, you'll find plenty of street parking and parking garages. Visit Park Harrisburg to find more information. If you download the parking app to pay, you may also be able to receive a few hours of free street parking around the Capitol on Saturdays by using the code LUVHBG.

After you've gone through security to enter the Capitol, you can start your tour right away. Or, if you'd like to learn more about the Pennsylvania government and its legislative process, I recommend visiting the interactive Welcome Center first.

The Welcome Center is located in the East Wing of the Capitol and is only open Monday - Friday from 8:30 am - 4:30 pm.

Overview of the Self-Guided Tour

As I mentioned previously, we decided to guide ourselves around the PA State Capitol using the app. We enjoyed the self-guided tour option that the app provided because it allowed us to take our time in each room. This way, I could take a million photos without disturbing a tour guide or others in the group.

The tour of the Pennsylvania State Capitol is comprised of five main parts. To give you an idea of what to expect, I'll share a brief overview of our self-guided tour.

When you enter the Capitol, the first thing you'll see is the incredible Rotunda. Modeled after St. Peter's Basilica in Rome, the 272-ft high, 52-million pound dome will take your breath away.

And perhaps the staircase looks familiar? That's because it was inspired by the famous staircase at the Paris Opera House (Palais Garnier). 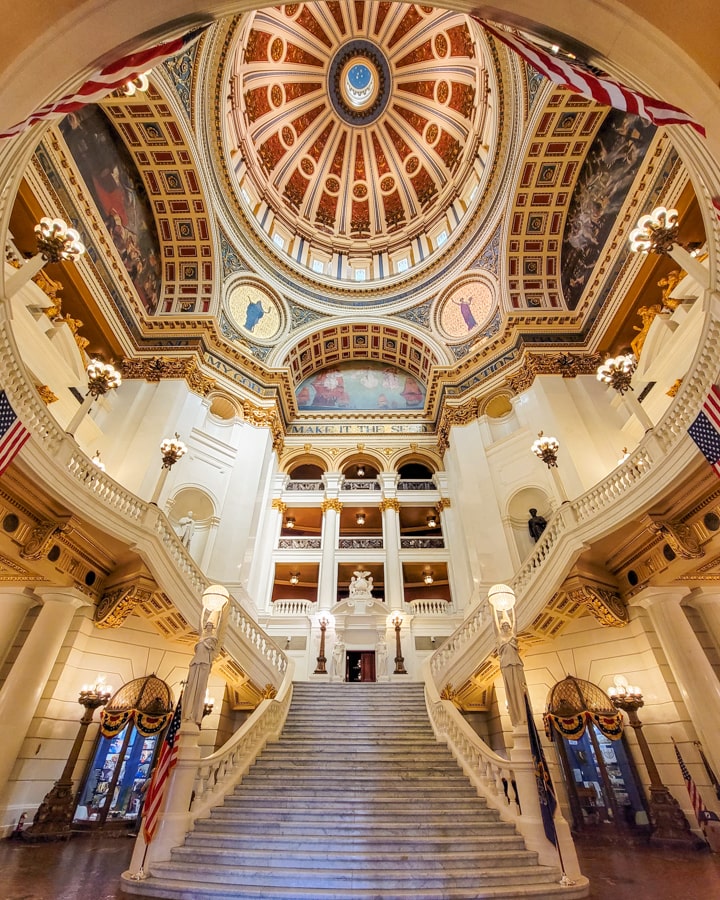 Looking up in the Rotunda

Turn your eyes upward to the dome's interior and you'll find several paintings by Edwin Austin Abbey, an American muralist, illustrator, and painter.

Abbey designed the small medallions to represent art, law, religion, and science. While the four larger murals represent Pennsylvania's primary industries in the early 1900s. Coal, oil, and steel are represented in three murals, plus another depicts William Penn's ships coming to the New World. 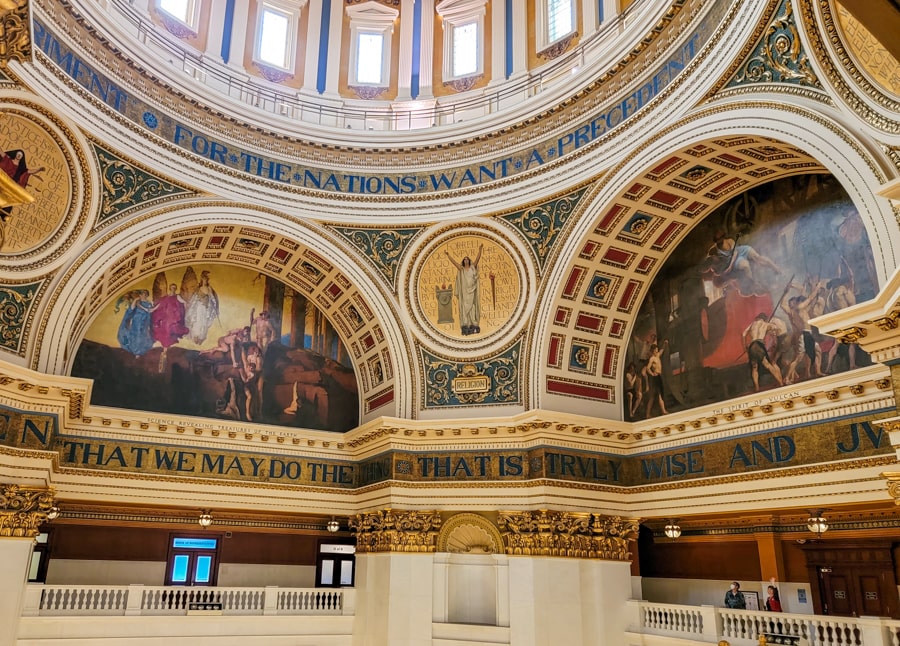 If you're using the app, be sure to click into each section - Stairs, Artwork, Lighting, etc. - for details on each design feature.

Next on the tour is the Senate Chamber. If you're using the app, click at the bottom where it says "Continue Tour: Senate Chamber". A map pops up directing you how to get to the next part of the tour.

The Senate meets in the Senate Chamber. In Pennsylvania, there are 50 State Senators, who serve a four year term. The Lieutenant Governor, who presides over the Senate, sits at the front of the room. 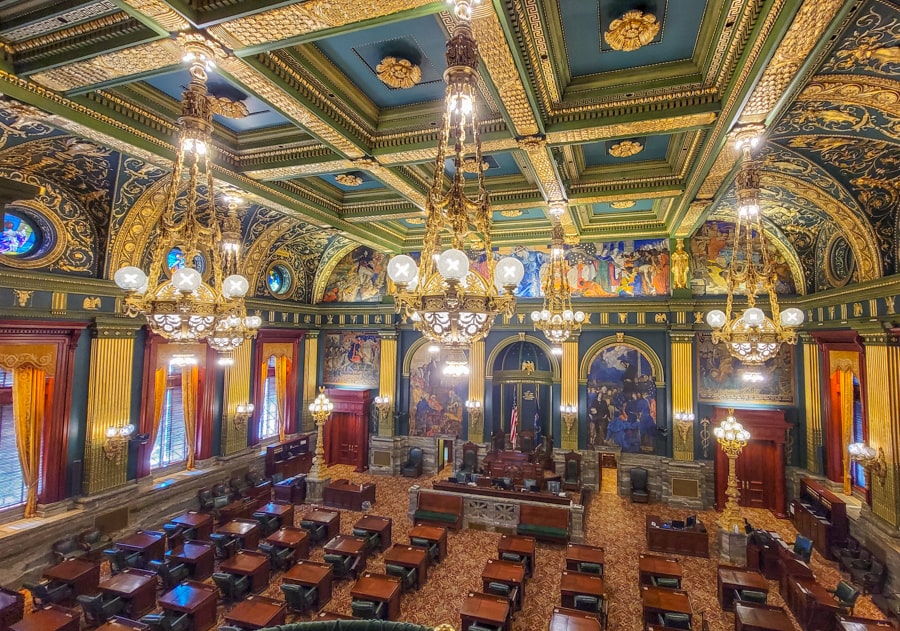 When we opened the door and entered the Senate Chamber, I had flashbacks to touring palaces in Europe upon seeing the grandiose décor of the room.

A few things immediately catch your eye as you gaze around the room. Beautiful Belize mahogany desks date back to 1906 and paintings by Violet Oakley are featured prominently around the room. In total, Violet Oakley painted 43 murals for the Pennsylvania State Capitol Building, which took her 25 years to complete. 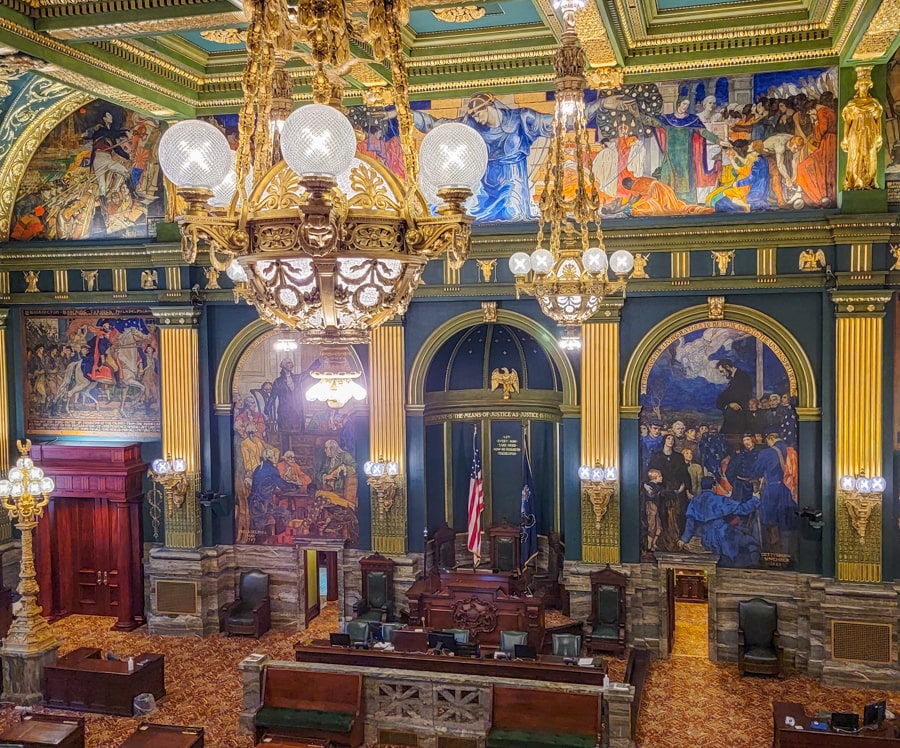 Around the room, you'll notice ten beautiful stained-glass windows, which Philadelphia native William Brantley Van Ingen designed. These murals represent the early ideas and industries of Pennsylvania. Each window is 200 pounds and 4 feet in diameter. Even on a cloudy day, the windows are stunning. 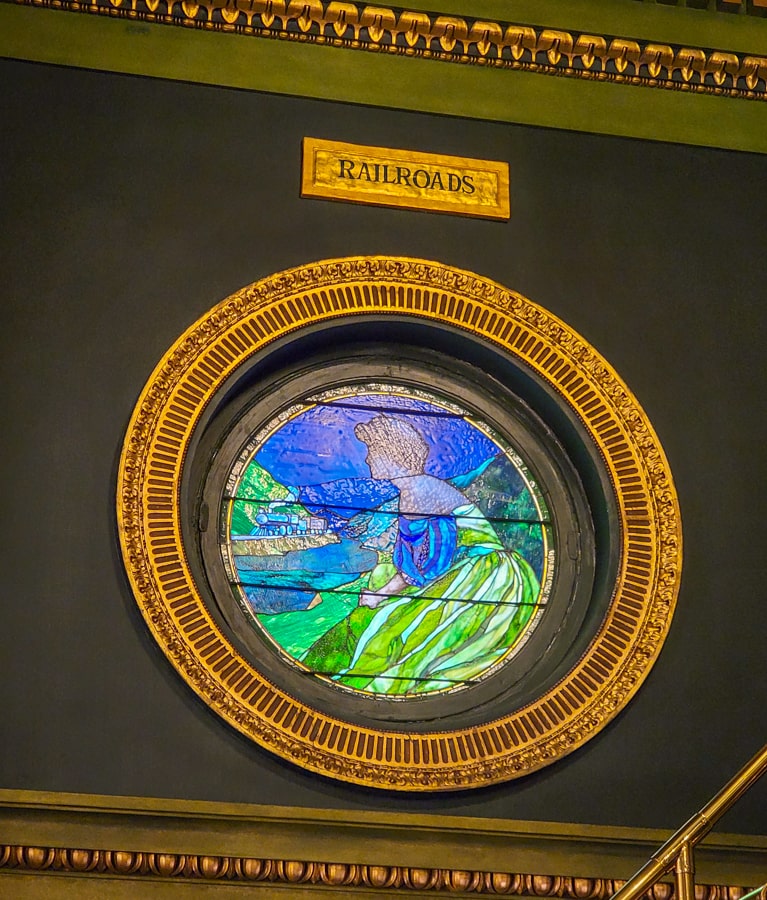 The Pennsylvania Supreme Court, which is the oldest in the U.S., meets in this room to decide questions of state constitutionality.

Unfortunately because we did not take the guided tour, we were unable to view the inside of the Supreme Court. This is one drawback to doing the tour on your own. Despite missing this room on our self-guided tour, I read on the app that in this room you'll find more paintings by Violet Oakley.

In addition, the Supreme Court chamber contains the only stained-glass dome in the Capitol. Completed by Alfred Goodwin, this dome cannot be seen from the outside - one reason to hop on a guided tour!

The House of Representatives meets in the House Chamber. Pennsylvania has 203 members in the House, who serve a two year term. The Speaker of the House is the oldest elected office in Pennsylvania and this person is voted into office by his or her peers. 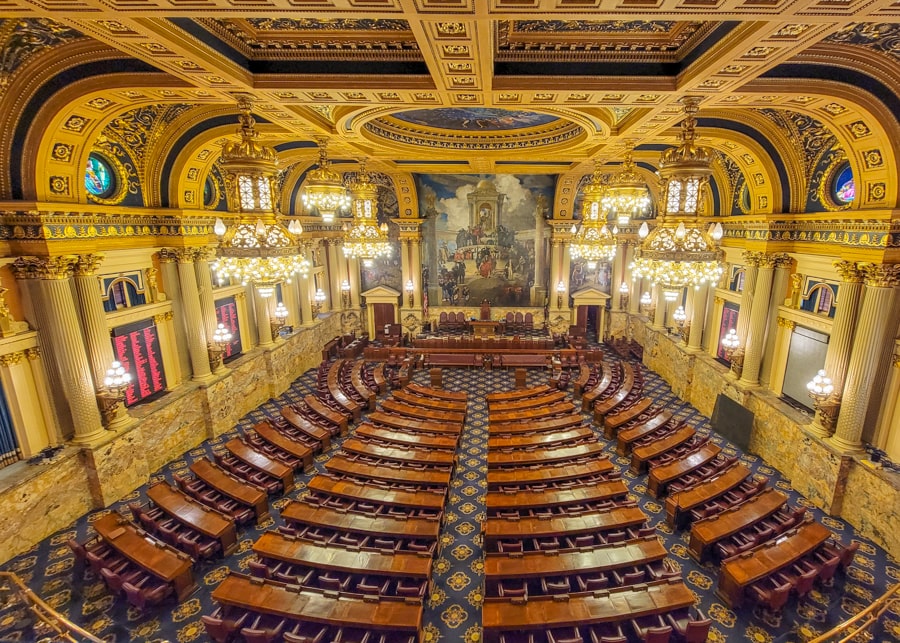 Inside the House Chamber, you'll once again see works by Edwin Austin Abbey which dominate the front of the room. Abbey's "The Apotheosis" is located directly behind the Speaker's podium. It features explorers and various leaders from the Pennsylvania's past. At the center of the painting is William Penn, a Quaker who founded the colony that would become Pennsylvania, with Benjamin Franklin (in blue) at his side. 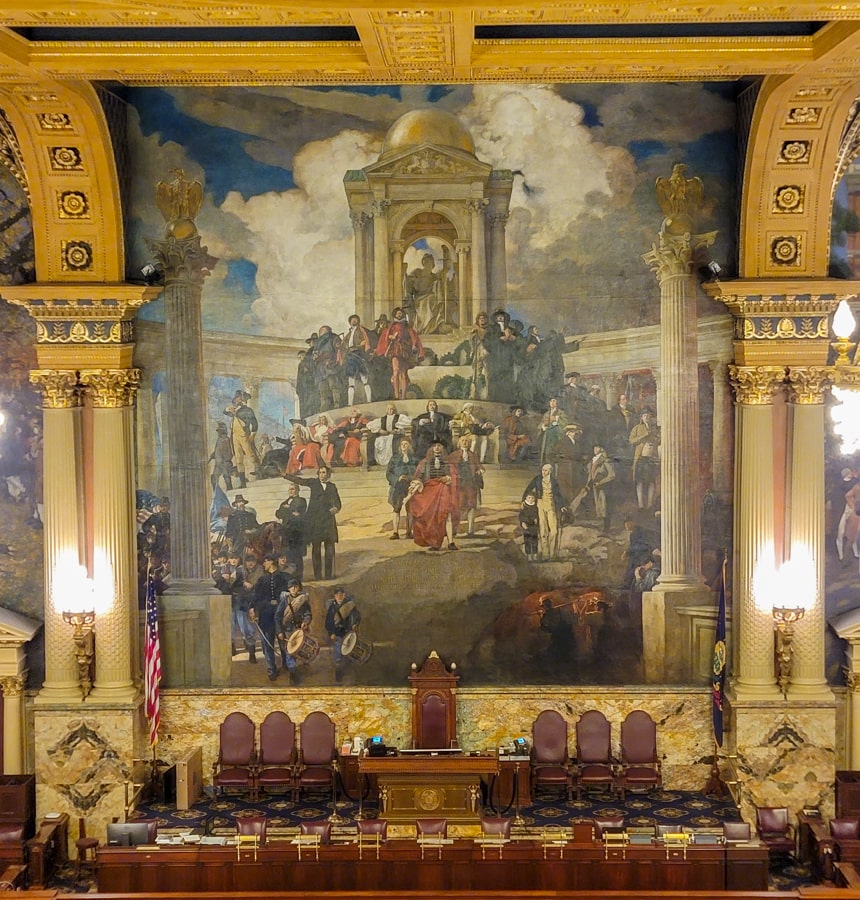 As in the Senate Chamber, William Brantley Van Ingen designed the stained-glass windows that adorn the room. The small chandeliers in the room each weigh 2 tons and the larger ones weight 4.5 tons - the size of a large male African elephant. Can you imagine sitting below those things?! 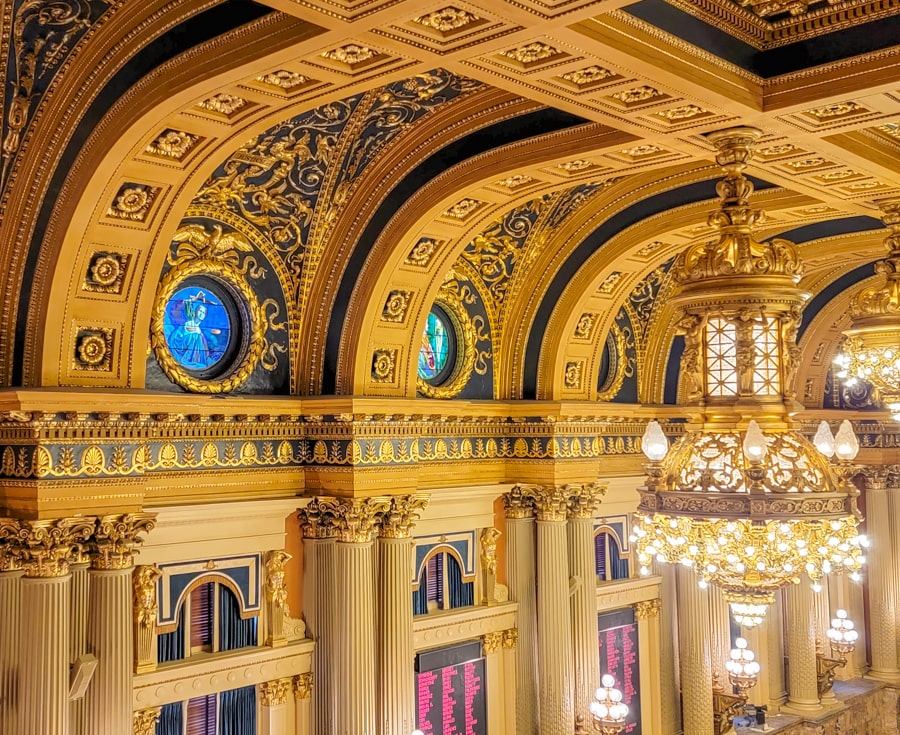 To finish up the tour, stop by the Senate Library. This library has served as the major source of information for this institution for over two hundred years. As visitors, you cannot check out any books, but it's fun to take a quick look to see the library. 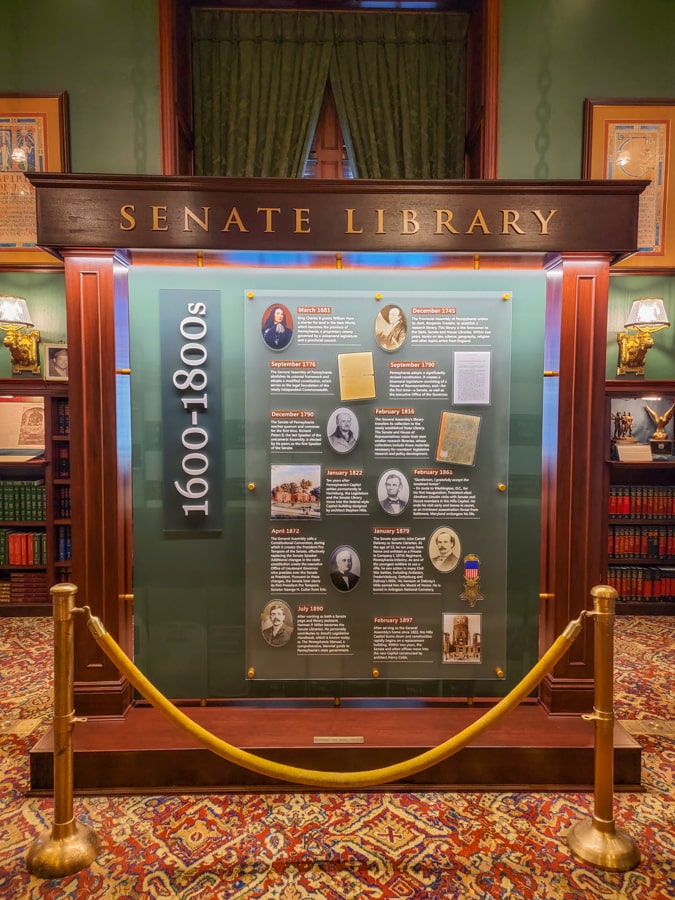 Once you've finished touring the inside of the Capitol, be sure to stroll around Capitol Complex. From the outside, you'll be able to fully appreciate the impressive gilded bronze dome. 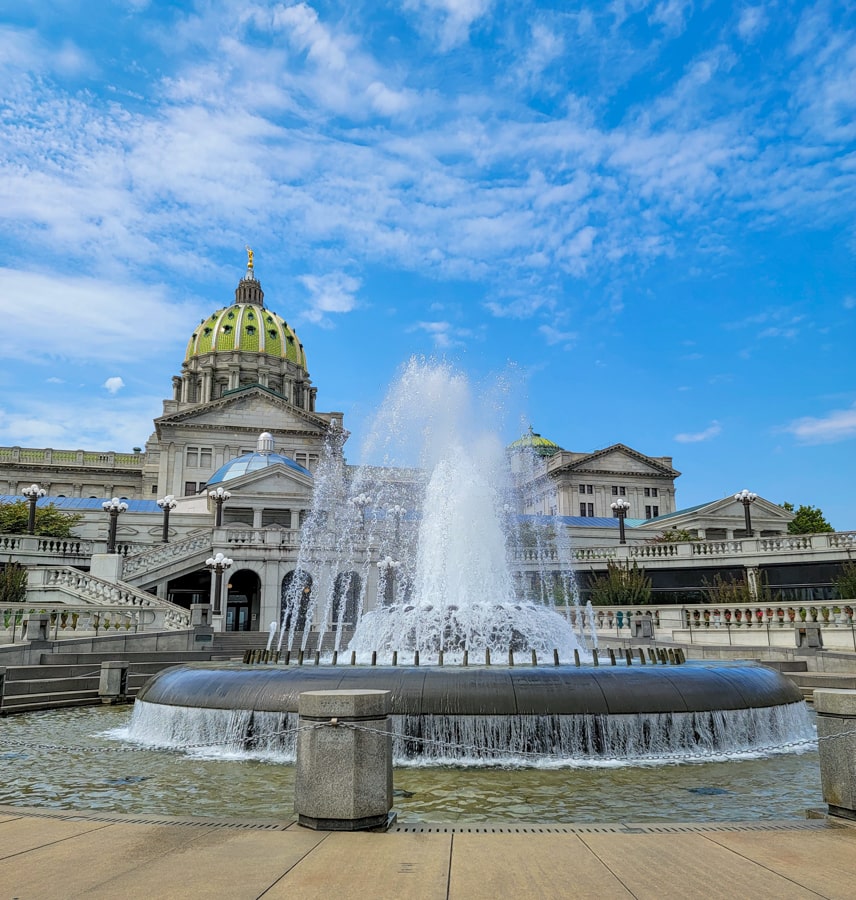 Around the complex, you'll also find various monuments and statues commemorating various historical figures and events. Use this brochure on Landmarks of Pennsylvania's Capitol Complex to help guide you around the premises. 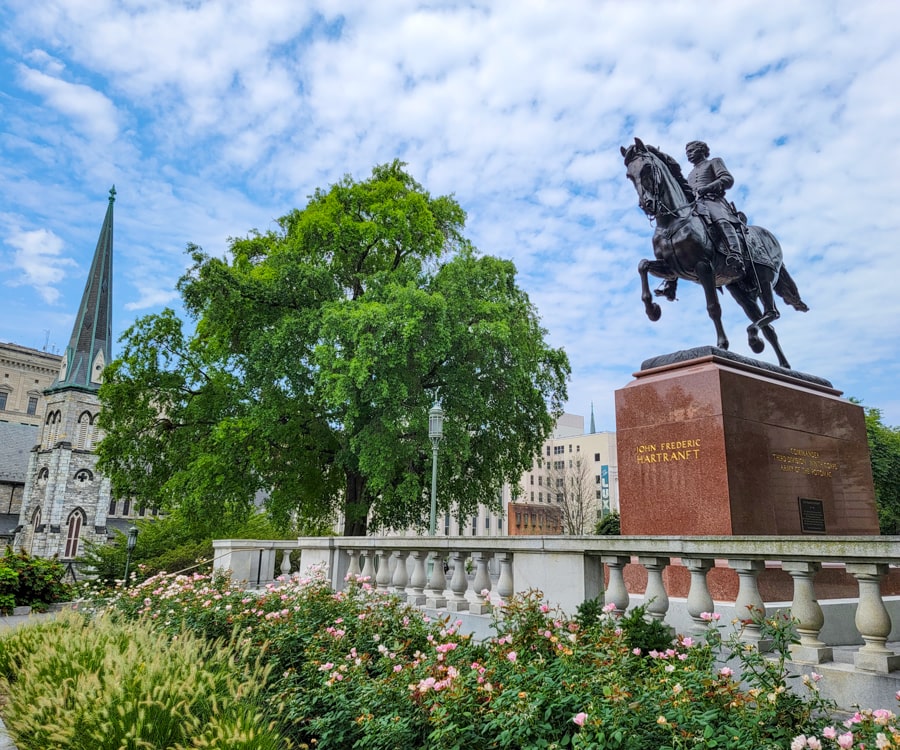 As we walked around the Capitol, I noticed another monument that's worth a stop (not in the brochure). On Walnut Street, you'll find a group of statues which mark the location of Tanner's Alley, an important area of the Underground Railroad in the 1850s. 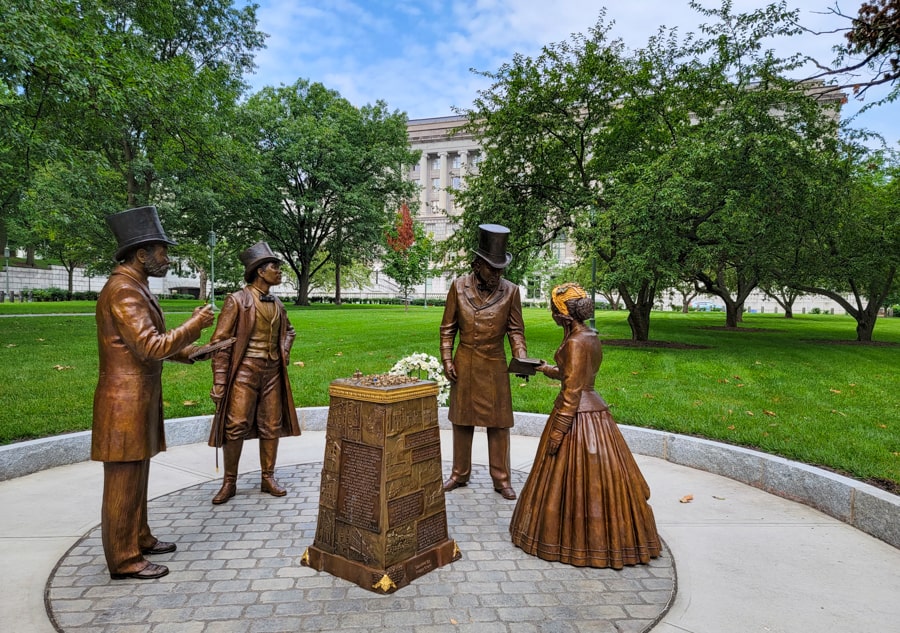 After our tour of the Pennsylvania State Capitol, I highly recommend a visit - especially for architecture, art, or history buffs. Not only is the building itself impressive but the works by various American artists inside are worth the trip alone. Plus, it's a great free activity for a visit to Harrisburg, PA!

Have you toured any of the U.S. state capitol buildings? How does the Pennsylvania State Capitol compare? Let me know in the comments below.

If you're planning a trip to Pennsylvania, you might also find these articles helpful: 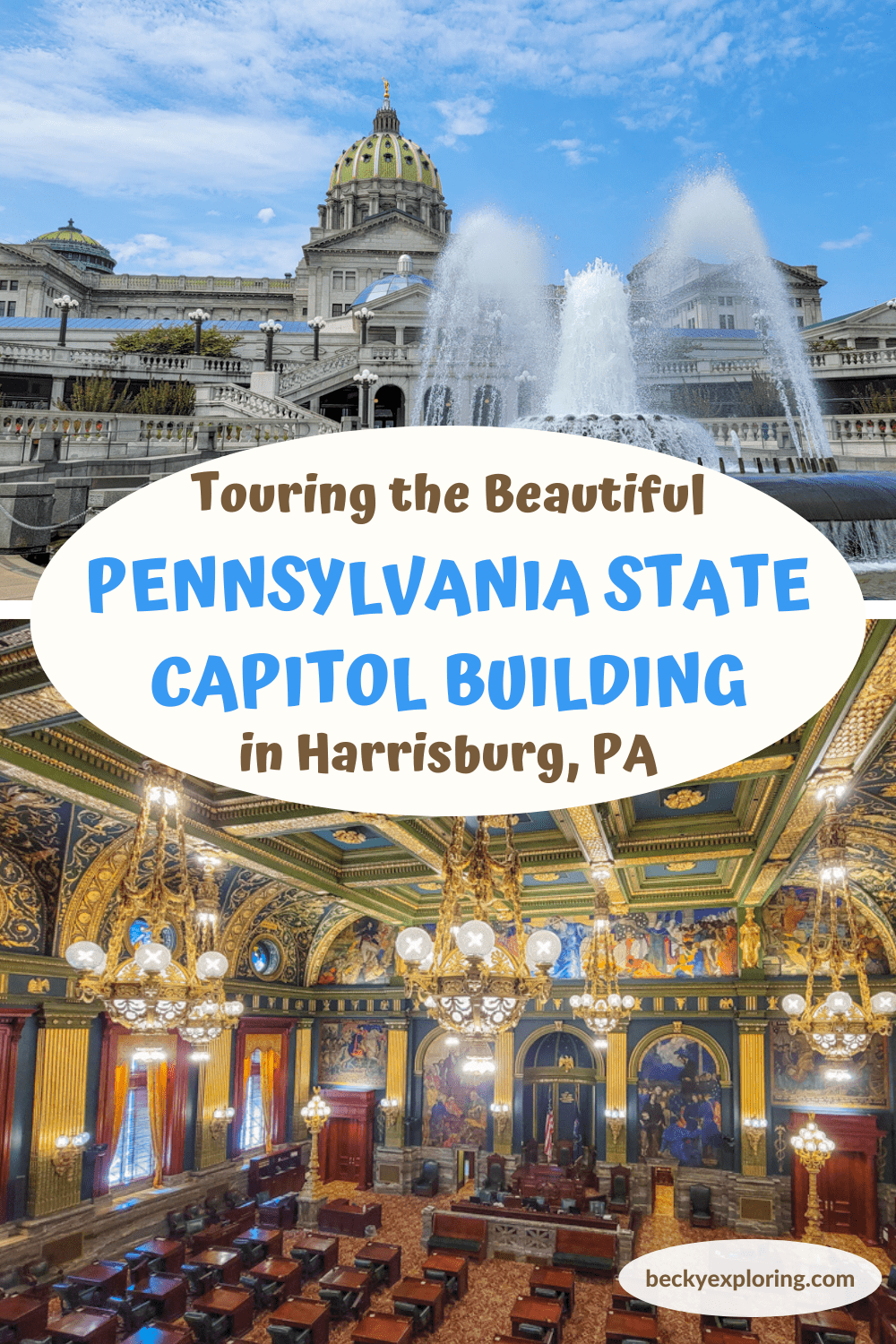 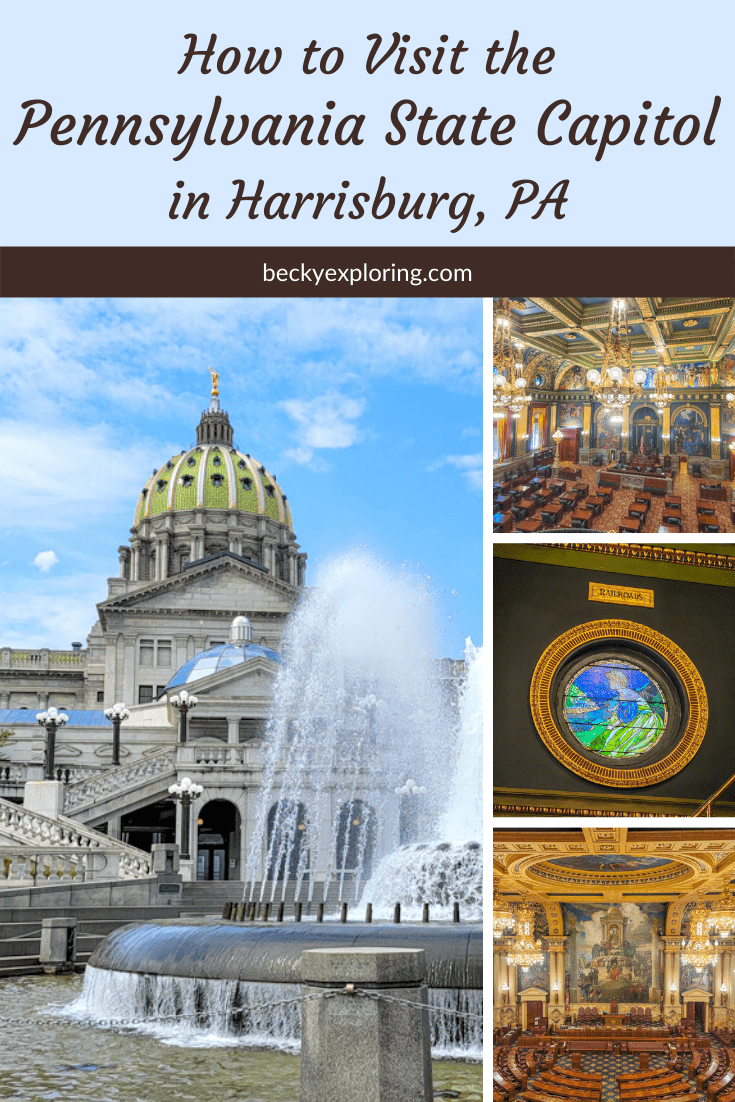 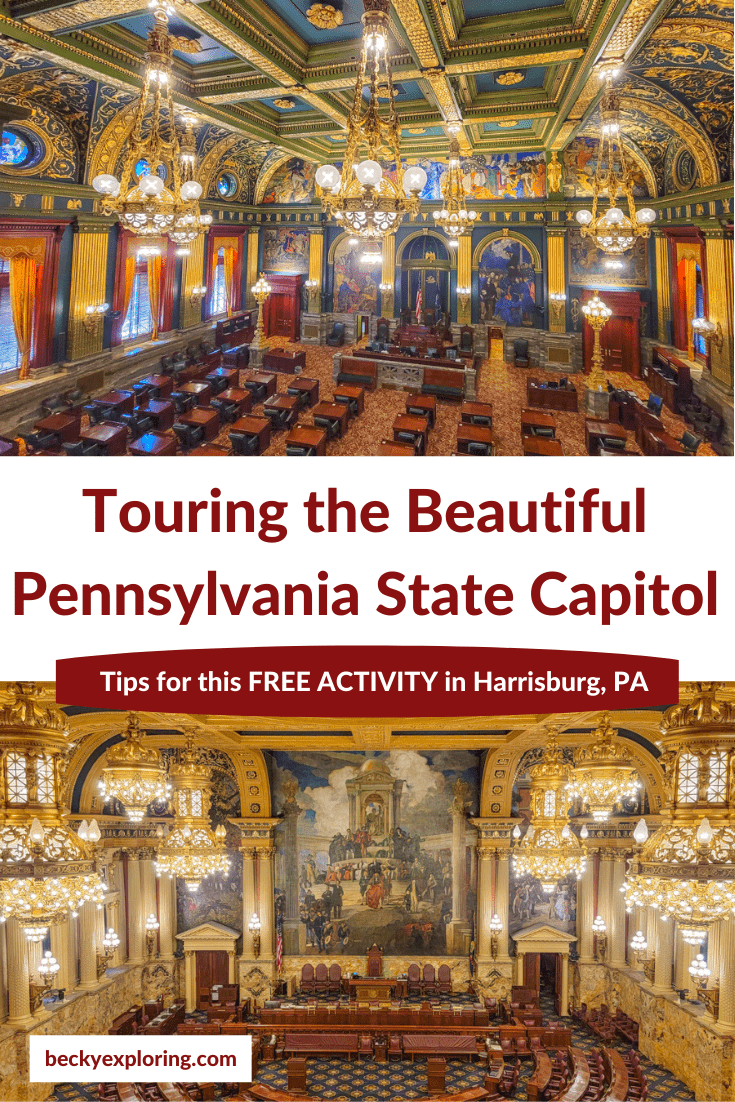 Read More
15 Amazing Things to Do in Lancaster County, PA