If you're visiting Borneo, chances are you're hoping to see some of its renowned wildlife during your visit. Borneo's dense rainforests contain a plethora of wildlife species, some unique to the island of Borneo. As deforestation threatens its rainforest, Borneo's wildlife is also in danger. In Sepilok, a small town in northeastern Borneo, wildlife conservation is the focus of the town. By visiting Sepilok, you will not only see these unique animals up-close, but you will also be supporting these important conservation efforts.

Planning a trip to Borneo? Check out my post '11-Day Itinerary in Sabah, Borneo'.

Places to Visit in Sepilok

Sepilok is home to several wildlife rehabilitation and conservation centers. These centers rescue animals affected by deforestation and human poaching and rehabilitate them.  As an animal-lover myself, I was eager to learn more about the rescue efforts and to see the animals.

Founded in 1964, the Sepilok Orangutan Rehabilitation Centre sits on 43 sq. km of protected land at the edge of the Kabili-Sepilok Forest Reserve. Its mission is to rehabilitate and care for orphaned and confiscated orangutans. Although the Sabah Wildlife Department owns and runs the center, entrance fees from visitors supplement the funding the center receives from this department.

During your visit, you can walk on boardwalks throughout the center, watch the baby orangutans in the nursery, and observe feedings twice daily (10 am & 3 pm). Since the goal of the center is to rehabilitate the orangutans and encourage them to return to the wild, the feedings are meant to be boring so that they’ll forage on their own.

Our Experience at the Orangutan Rehabilitation Centre

Since we arrived in Sepilok on a morning flight, we did not arrive at the center until 11am. We missed the morning feeding, however we had heard that the morning feeding is more crowded due to tour groups which stop there on the way to the Kinabatangan River.

Luckily, we still had time to wander through the center before lunch. Since other visitors were leaving the center to go to lunch, we were alone wandering along the paths. Then, we came across two orangutans - one of them right on the boardwalk! 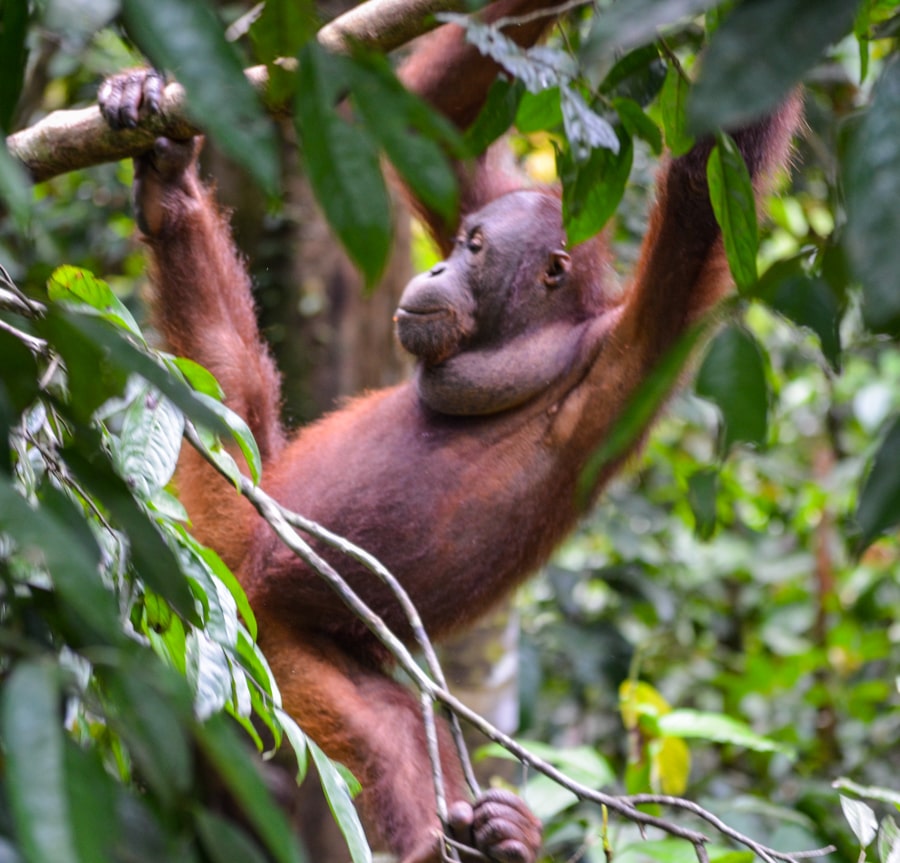 First orangutan we saw, swinging next to the boardwalk! 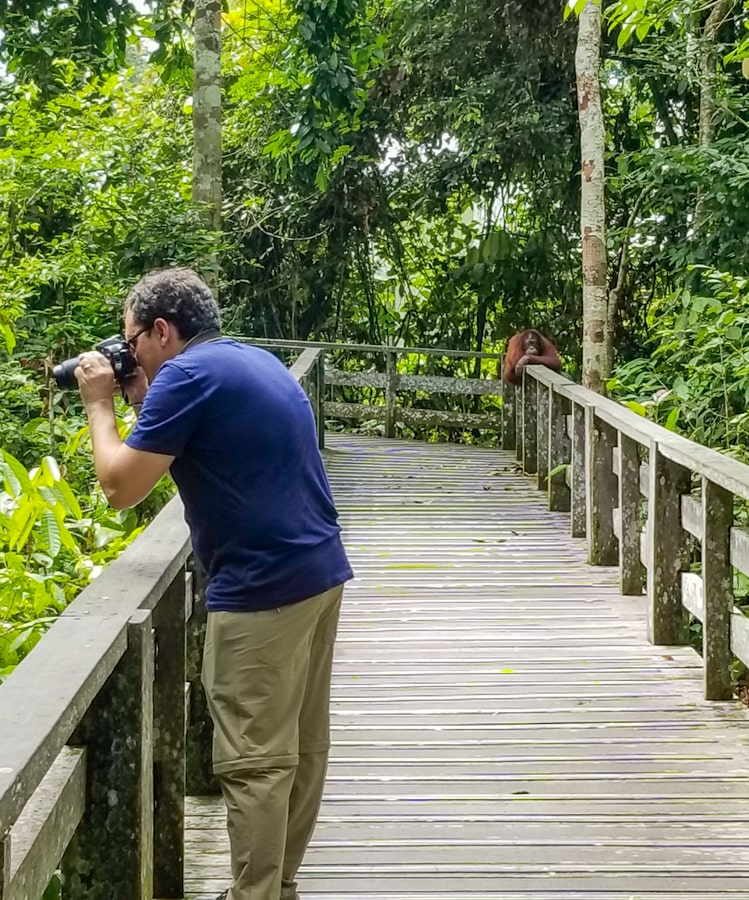 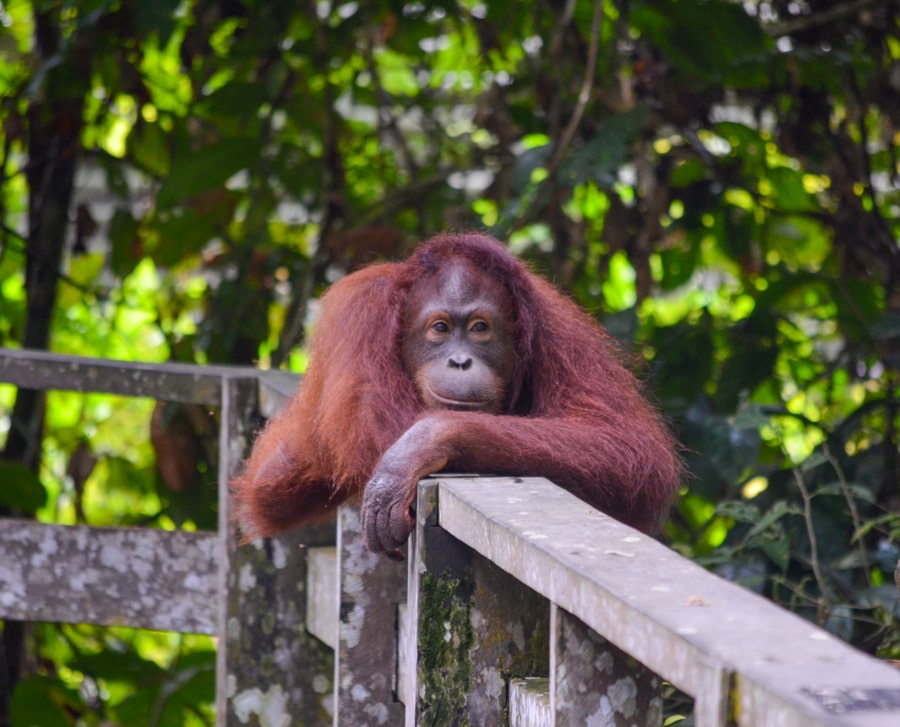 Amused that we almost missed him.

This was the closest we got to the orangutans during our entire visit (though we kept our distance as cautioned). We were fortunate because we have heard that sometimes you can walk through and only see the orangutans at the feedings.

Later that day, we returned to the center to see the afternoon feeding. Although it was crowded on the viewing platform, it wasn't jam-packed so I can imagine it could be worse in the morning. We saw two orangutans at the feeding, munching on the fruit provided. 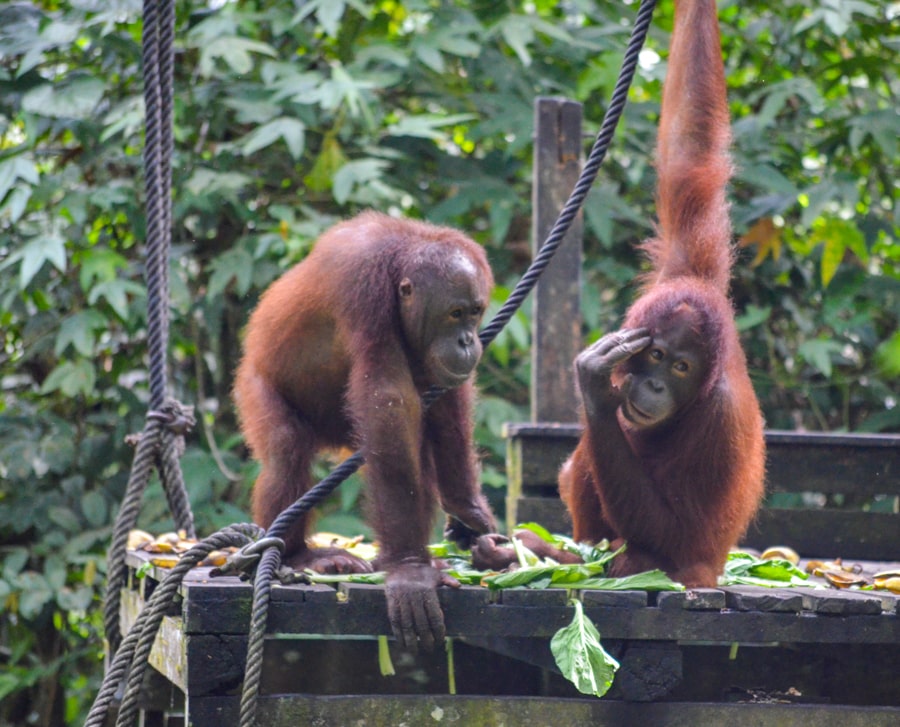 As we watched them, a rowdy group of macaque monkeys descended on the feeding platform. The macaques eventually pushed out the orangutans who, though larger, are politer than the macaques! The orangutans got annoyed with the disturbance and left while the macaques finished off the food. 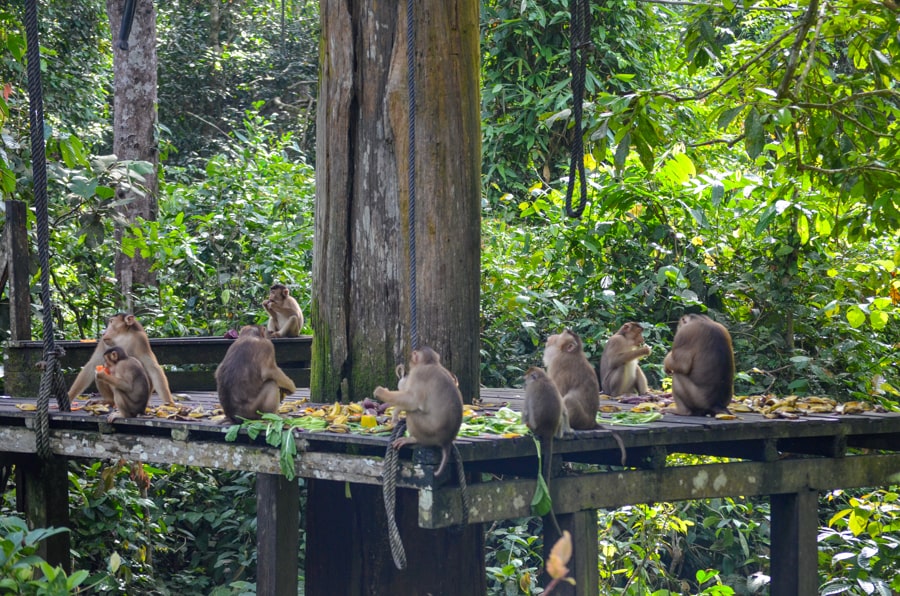 Macaques took over the feeding platform.

Afterwards, we headed over to the nursery to see the baby orangutans. We stayed watching the feeding for too long though so we only had a few minutes to see the babies before closing.

Mama and baby orangutan! So cute!

Tip:  Although we spent pretty much our entire day at the Orangutan Rehabilitation Centre, you could easily split the day between here and the Bornean Sun Bear Conservation Center.

The Bornean Sun Bear Conservation Centre (BSBCC) is a sun bear rescue and rehabilitation facility which is located right next to the Orangutan Rehabilitation Centre. Found only in Southeast Asia, sun bears are the world’s smallest bears and are listed as vulnerable on the IUCN Red List of Threatened Species. They face several threats including deforestation and being captured by humans to serve as pets or even food in some places.

The bears at the center are ones that were captured and kept as pets, often in small enclosures and do not know what it’s like to be in the wild. The center has large forest enclosures so the ex-captive bears can learn how to survive in the wild. Once the center believes a bear is ready, they will reintroduce her to the wild. 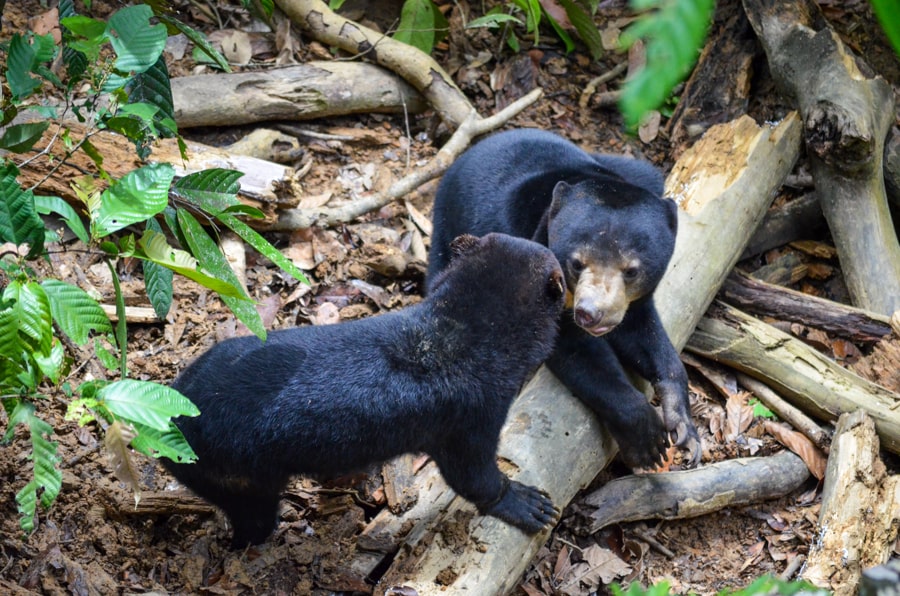 Our Experience at BSBCC

Since the walkways throughout the center are compact, it doesn’t take much time to walk through it. The bears were quite active during our visit and it was fun to watch them. They foraged for food, played, and fought over a log.

Rangers are standing along the boardwalk to answer questions and are happy to help you learn more about these bears and the center. They also have a small exhibit at the back of the center which tells you more about each of the bears and where they were found. 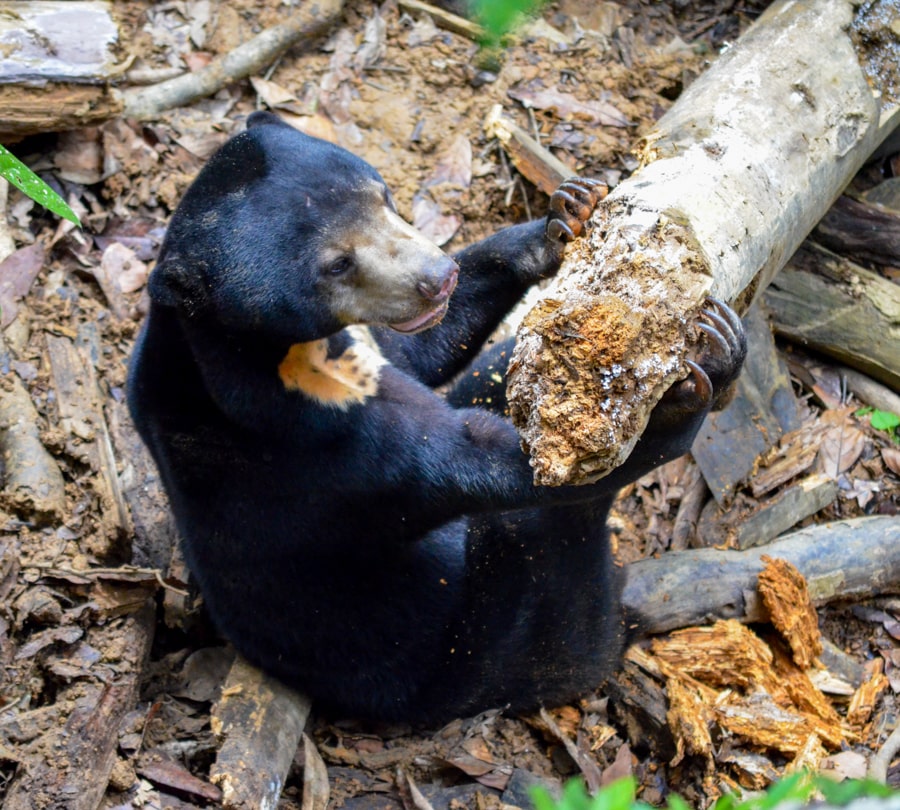 Located within the Kabili-Sepilok Forest Reserve, the Rainforest Discovery Centre serves as an environmental education center. The center offers guided tours through its rainforest, including a night safari walk.

Tip:  Bring binoculars and a good flashlight on your trip to enhance the experience. It's difficult to see the wildlife with your naked eye and I wish we'd had binoculars when we visited.

Our Experience at the Rainforest Discovery Centre

On our first night in Sepilok, we went on a guided 2-hour night safari walk. We saw a flying squirrel, kingfisher, slow loris, and lots of big, scary bugs. 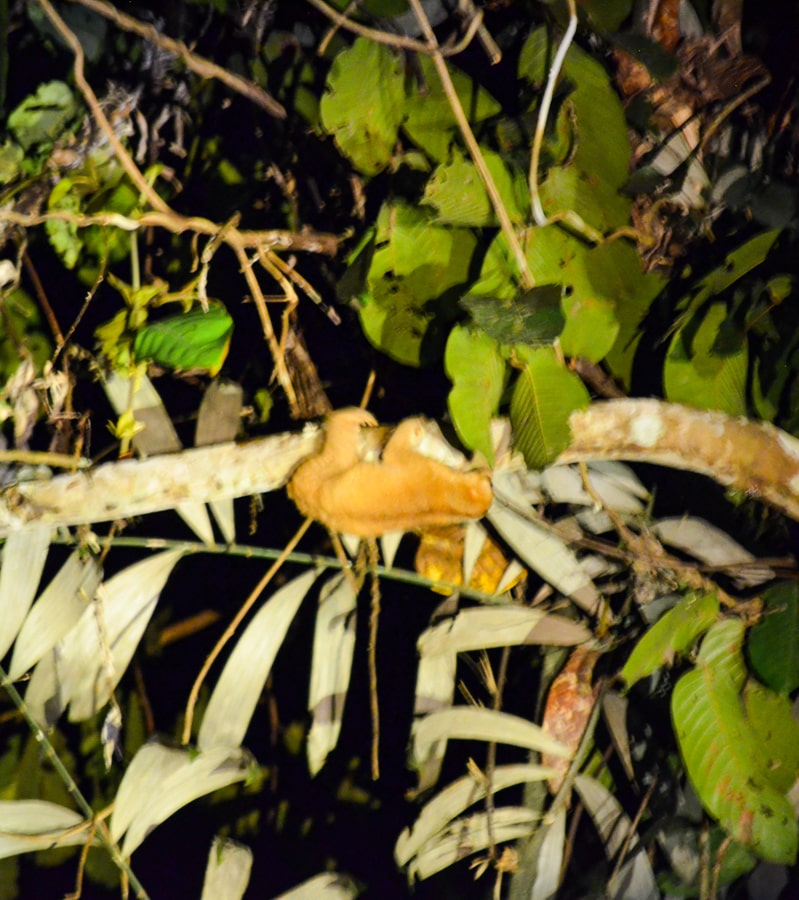 The slow loris was the highlight of the night. We saw him at the end of our walk.

At one point, we were going to go down one path, but the guides decided we shouldn’t. There was probably something interesting down that way! Overall, we did a lot of walking and didn’t see much. 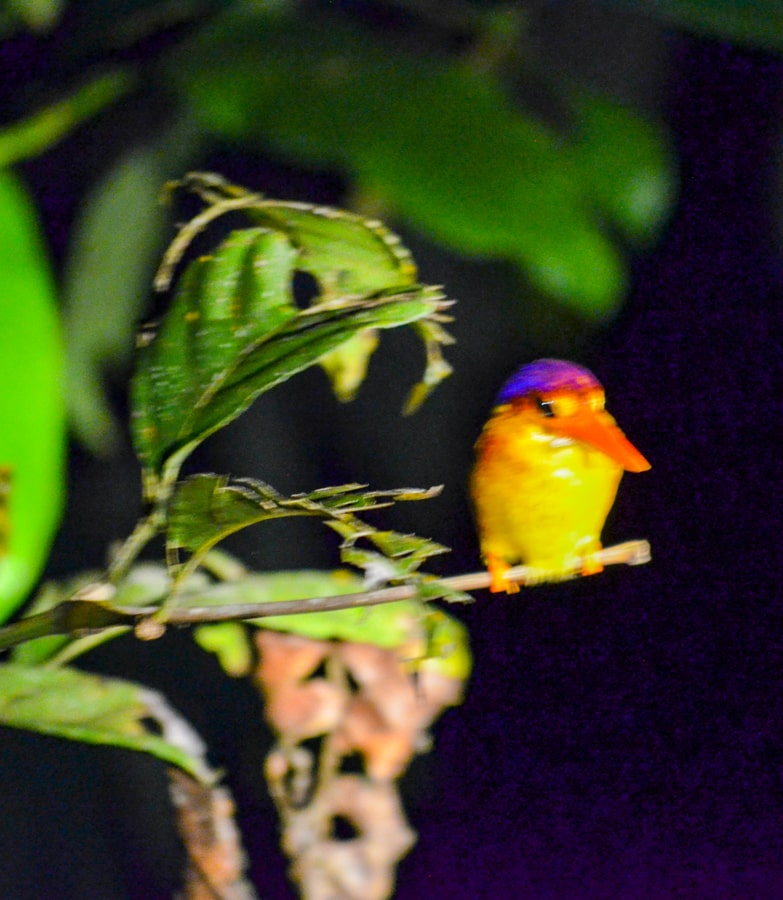 Kingfisher - probably blinded after the flashlight

The next day, we walked around the Rainforest Discovery Center during the afternoon. There are numerous trails winding through the center and we were hoping to spot some birds or animals. We didn’t have much luck spotting animals, but saw a lot of lizards. 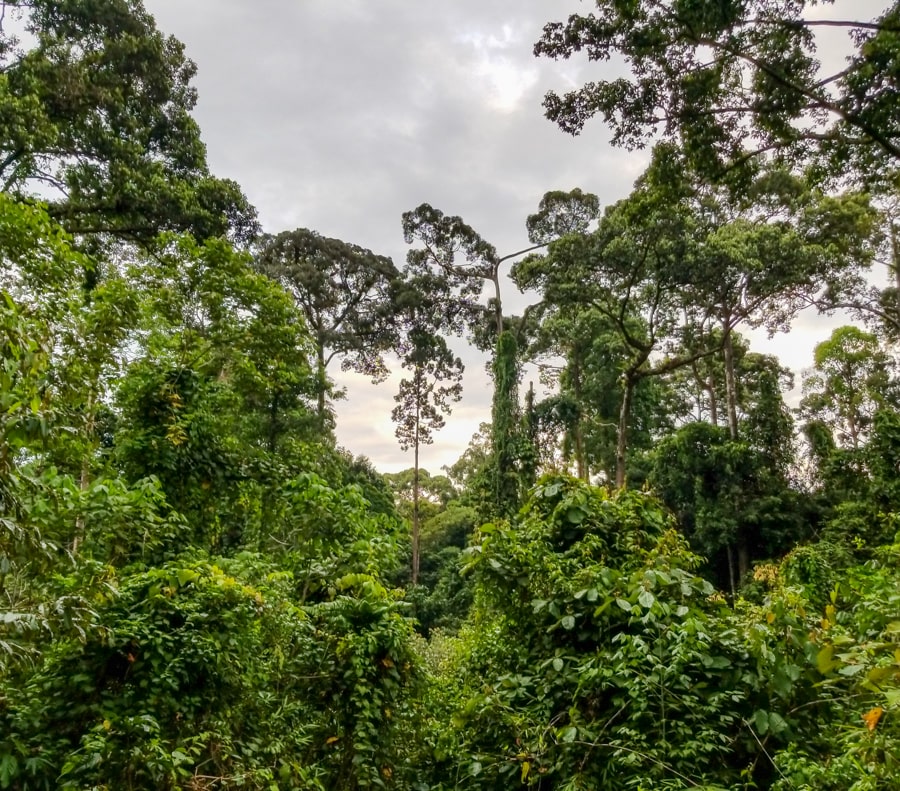 In the early evening, we parked ourselves on a bench up on the metal canopy walkways and waited until we saw a couple flying squirrels. They are really fun to watch as they soar from treetop to treetop. One of them flew right at us, about 6 ft. over our heads, before landing on a tree behind us!

Tip:  Best time to go is at dusk. The bugs start humming loudly, making it sound like an alien invasion and the flying squirrels come out. Get up on the canopy walkway and wait in one place, scanning the tops of the trees. Your patience will pay off.

The Labuk Bay Proboscis Monkey Sanctuary was started in 1994 by a palm oil plantation owner that bought the land to develop it commercially. Instead, he decided to leave it undeveloped as a sanctuary for proboscis monkeys. At the sanctuary, they feed the monkeys fruits and water and visitors can observe feedings.

The sanctuary offers daily shuttle service to/from Sepilok departing from the Sepilok Orangutan Rehabilitation Centre parking lot in the morning and returning there in the afternoon. It costs ~US $5 pp each way. The shuttle times didn't work well with our schedule (and it was too far to walk) so we did not visit this site.

One of the best places to spot orangutans, proboscis monkeys and pygmy elephants in the wild is on the Kinabatangan River. If you have time in your itinerary, consider taking a day-trip from Sepilok to the river. Our hotel – the Nature Lodge Sepilok – offered a trip which began at 12:30 pm and returned the same day at 9 pm. The itinerary included transportation to/from the river (~2.5 hrs one-way), a 2-hr boat cruise, and dinner. The total cost was ~US $60 per person.

Although we looked into taking this trip, we chose to walk through the Rainforest Discovery Center instead. In retrospect, I wish we’d taken the river cruise since we didn’t see much in the RDC. If you want to get the full Kinabatangan River experience, you could opt to stay at a nature lodge closer to the river, though those lodges are more expensive than those in Sepilok.

The closest airport to Sepilok is the Sandakan Airport (SDK). From there, it is a ~20-minute taxi ride to Sepilok.

Since we visited Sepilok as part of a larger Sabah itinerary, we flew through Kota Kinabalu – the capital of Sabah. From Kota Kinabalu, it’s about a 50-minute flight to Sandakan on AirAsia (~US$40pp round-trip). AirAsia also offers non-stop flights from Kuala Lumpur to Sandakan (~2-hr, 45-min flight, ~US$90 pp round-trip).

Buses are a much cheaper mode of transportation around Sabah. Traveling by bus from Kota Kinabalu to Sepilok will take approximately 6 hours and cost ~US$10.

Sepilok has a few lodges and guest houses from which to choose, all situated within a couple kilometers of the centers.

We chose to stay at the Nature Lodge Sepilok which is ~1.5 km from the Orangutan Rehabilitation Center and ~1 km from the Rainforest Discovery Center. We stayed in the Standard Double Room which was set in a duplex-style with 2 rooms per building. The room was comfortable and had a nice front porch. 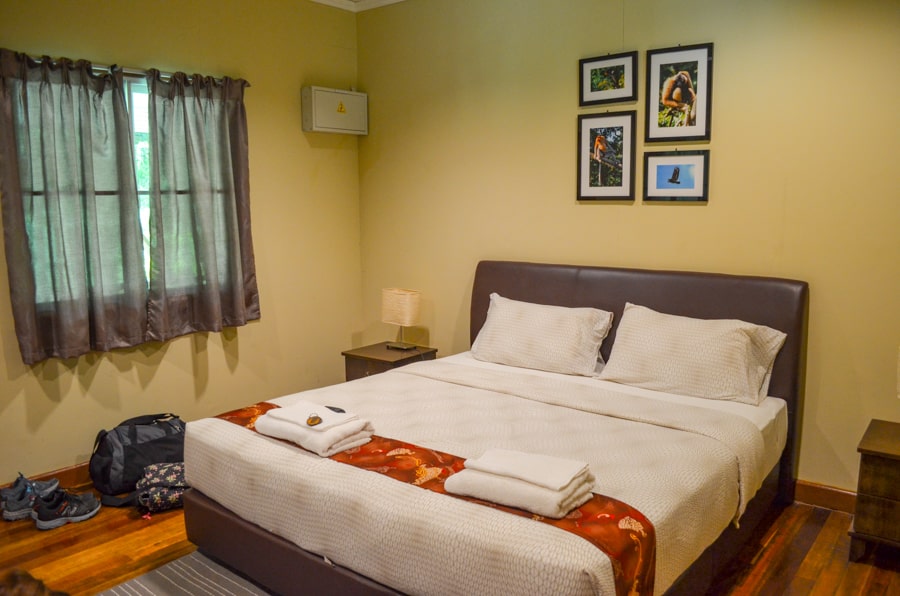 The bathrooms are attached to the rooms, however they are outside of the room and open-air. They also have a small garden at the back of them. 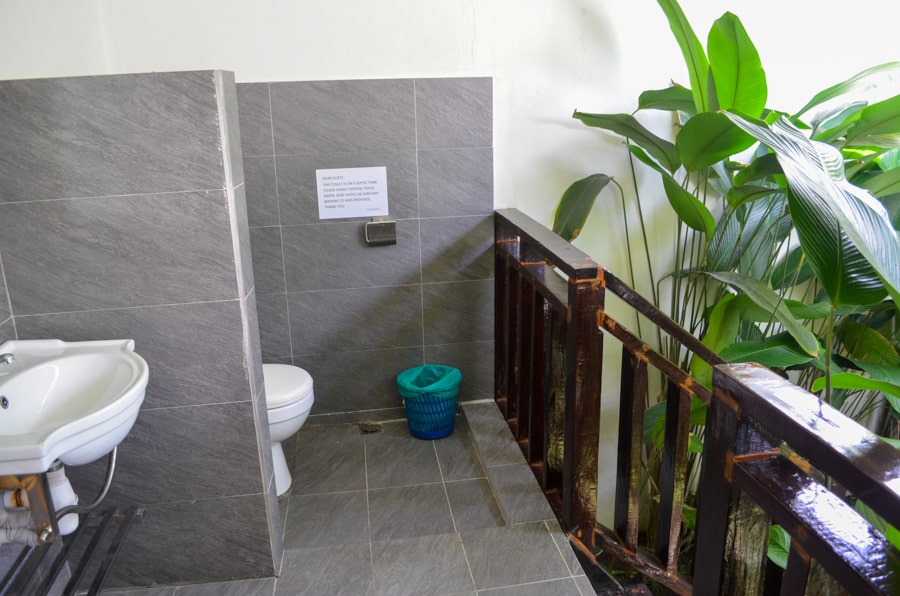 The downside of this style is that if you have neighbors in the room next to you, there’s a lack of privacy. If your neighbors choose to hang out in their “garden,” their voices and/or cigarette smoke will travel into your bathroom. Plus, all noise travels between bathrooms, if you know what I mean…. 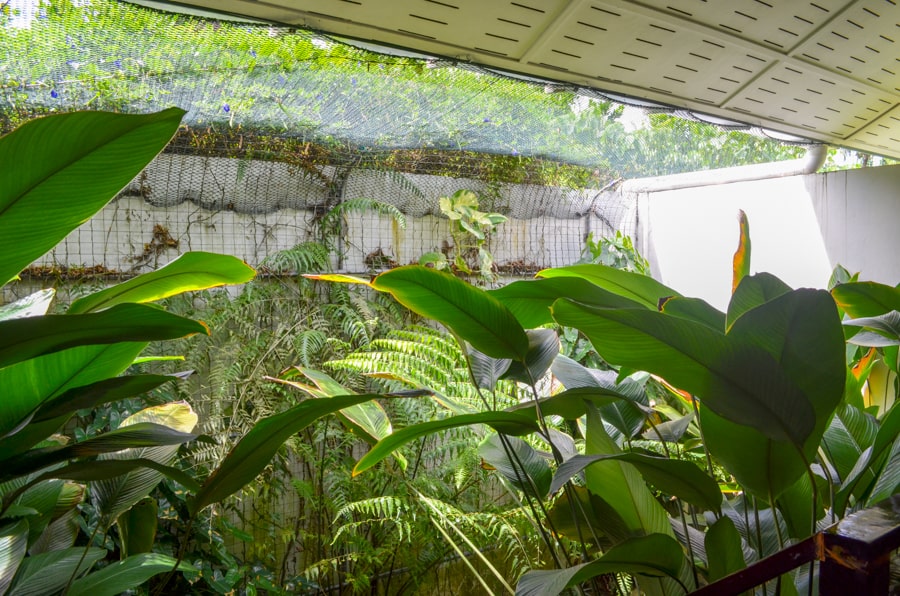 Although we didn’t stay at the Sepilok Nature Resort, we ate lunch here twice. This resort is located steps from the Orangutan Rehabilitation Center so it’s more convenient than where we stayed but is also more expensive. The rooms are scattered throughout the garden with a pond in the center of the complex. 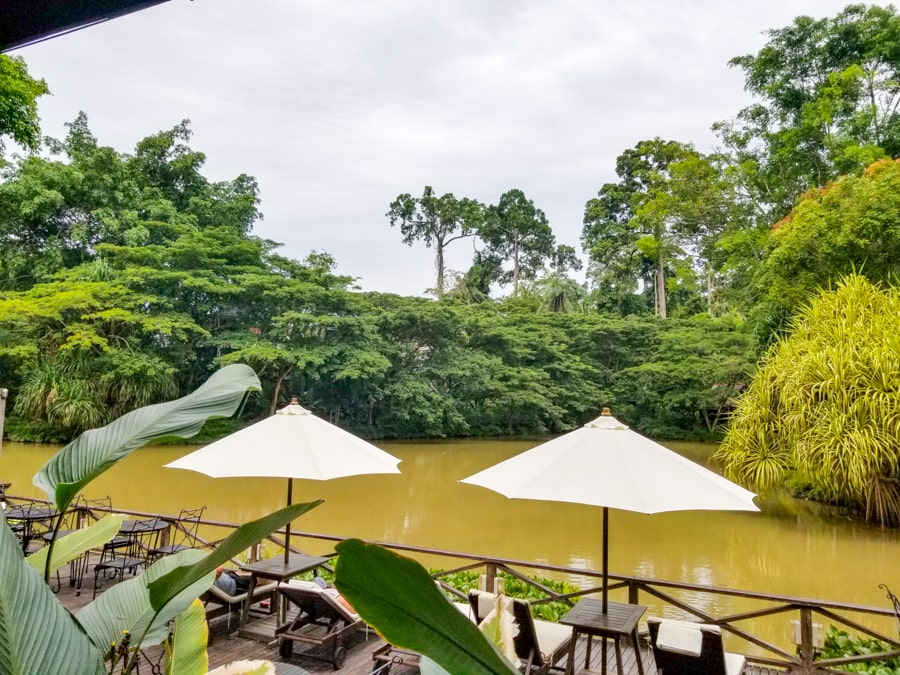 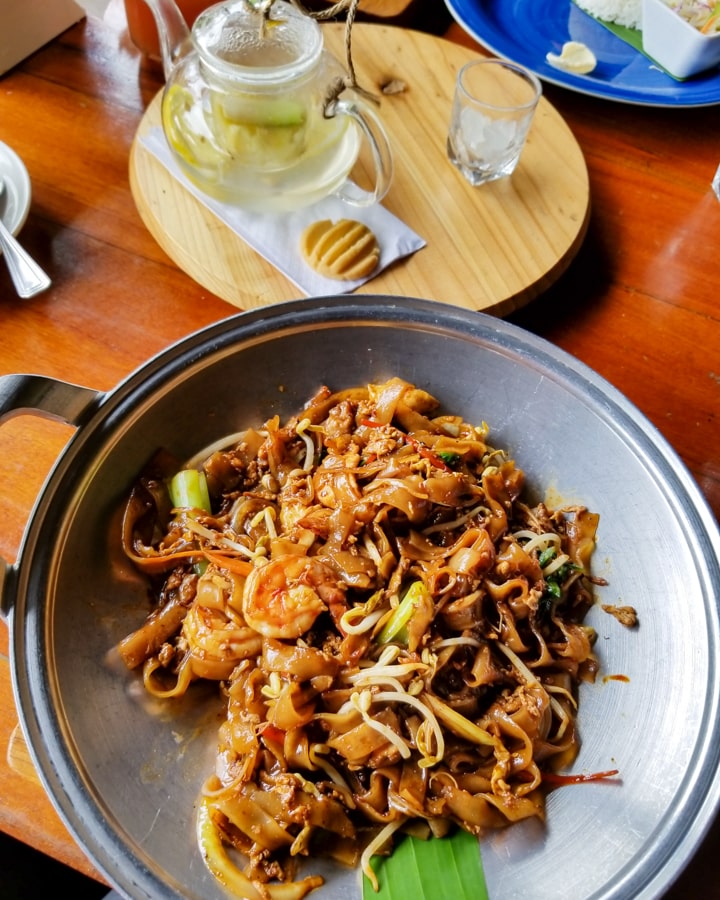 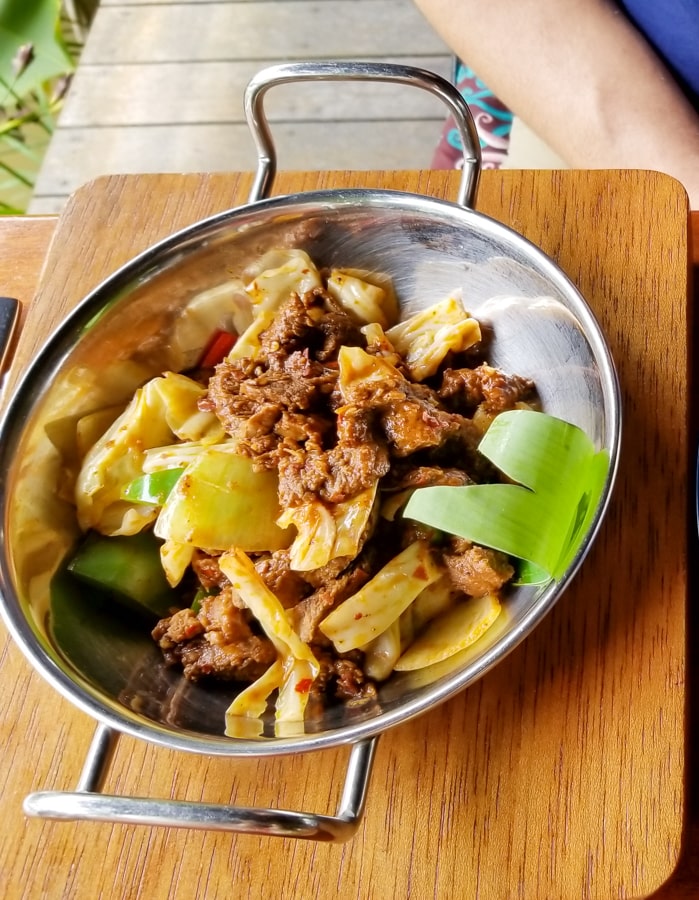 One happy surprise was a hummingbird that came to sit beside us as we ate our lunch. 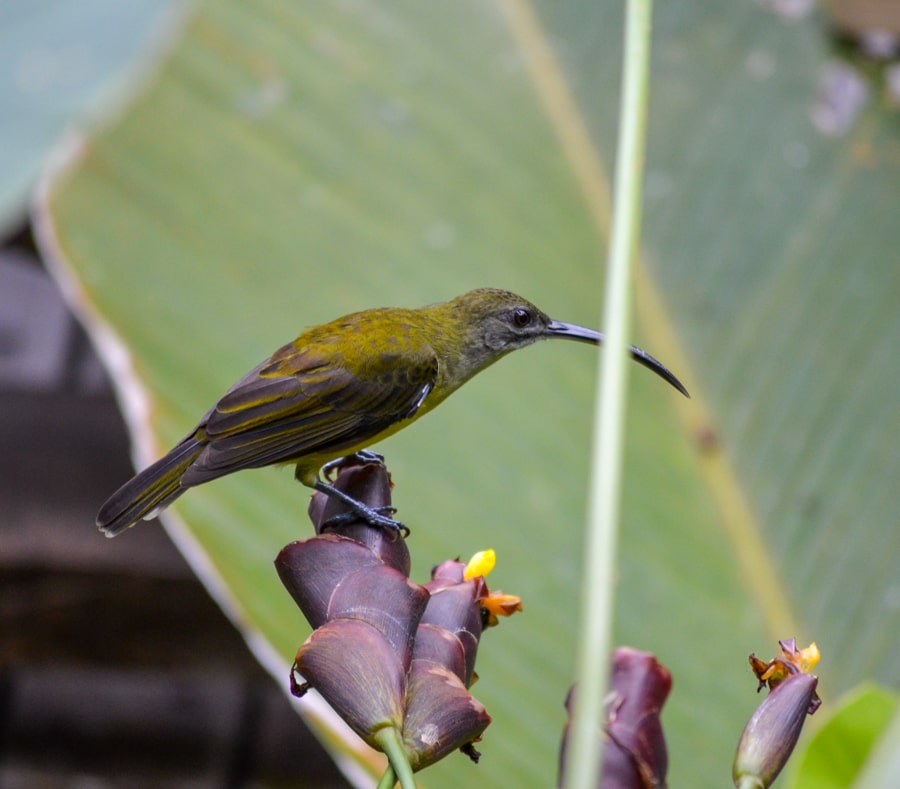 When visiting Sabah, Borneo, a trip to Sepilok is a perfect opportunity for animal lovers to support local conservation and rescue efforts. We got very lucky and saw a variety of animals during our visit and I'd highly recommend adding this stop to your Borneo itinerary.

Have you visited Sepilok? Which animals did you have a chance to see on your trip? 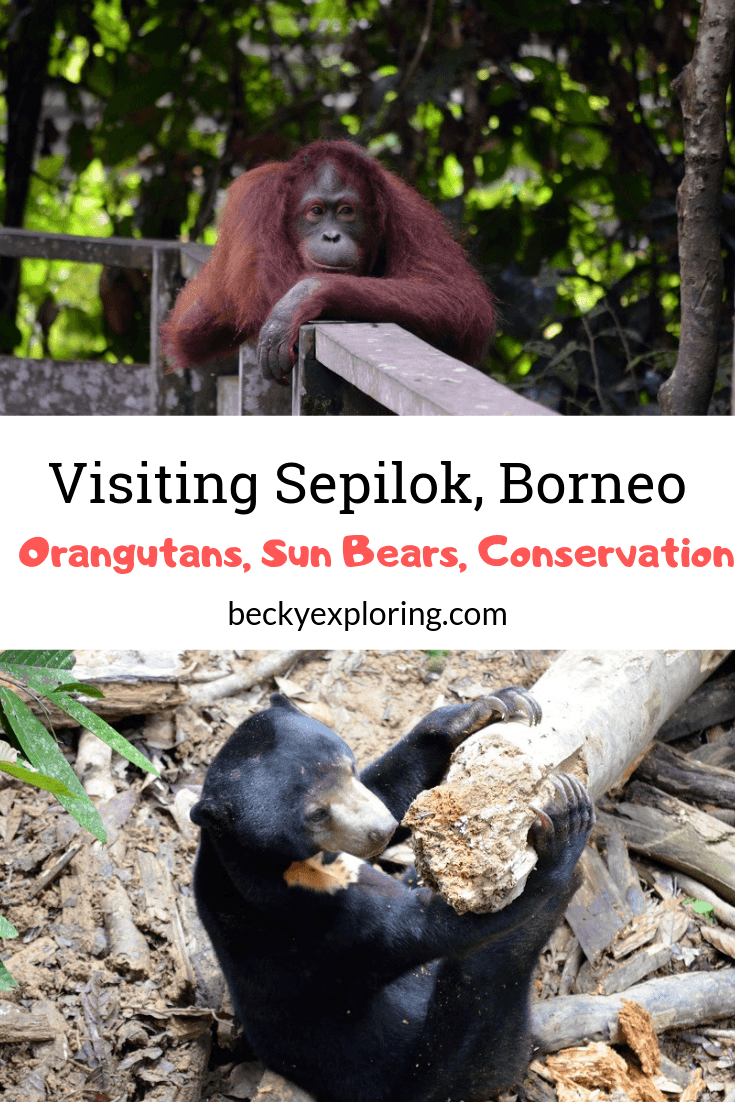 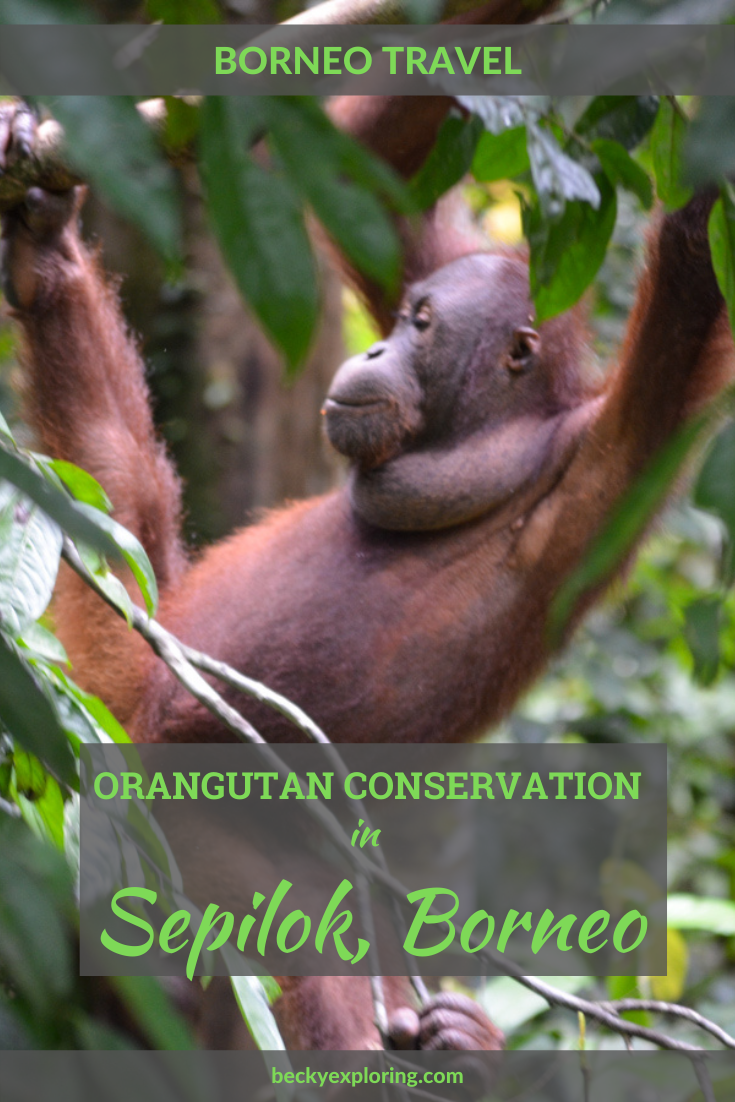 Learning to Scuba Dive (by Overcoming My Fears)

Read More
Learning to Scuba Dive (by Overcoming My Fears)